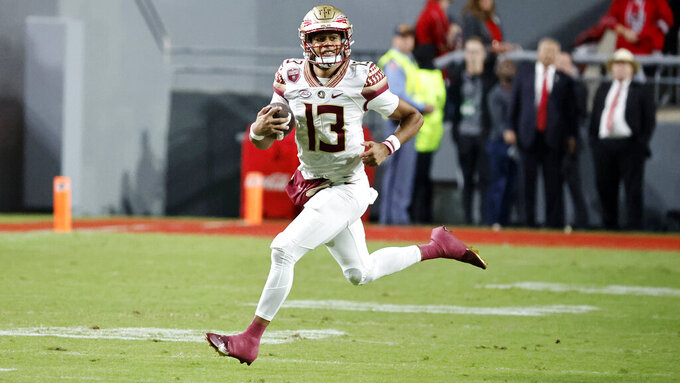 Clemson seeks to take a commanding lead in the ACC’s Atlantic Division after scoring 30 or more points in each of its first six games. The Tigers have defeated Wake Forest, North Carolina State and Boston College in consecutive weeks. Florida State is going for its first win over a top-five team since upsetting North Carolina at home in Oct. 2020.

Clemson run defense vs. Florida State run game. The Tigers are second in the nation at stopping the run at just under 64 yards per game. The Seminoles have the ACC's No. 2 rushing offense at 204 yards per game. A big question is the status of FSU leading rusher Treshaun Ward. He left last week’s game at NC State and was seen on the sideline with his right arm in a sling.

Clemson: Second-year RB Will Shipley has 19 rushing touchdowns and if he scores one Saturday he'll have 20 in 17 career games. That would be one game earlier than Clemson all-time leading rusher Travis Etienne scored his 20th. Shipley averages 5.9 yards per carry and has scored eight TDs this season.

Florida State: Fifth-year QB Jordan Travis is among one of 10 active FBS players to have surpassed 4,000 passing yards and 1,500 rushing yards in his career.

Clemson is attempting to win seven consecutive games against Florida State for the first time in series history. Five of the six wins in the streak have been by double digits. ... Florida State is first in the ACC and 14th in the FBS in pass defense. The Seminoles' are allowing their fewest passing yards (170.3 per game) since the 2013 national championship season. ... FSU is averaging an ACC-best 14.4 yards per completion. … Clemson is 98-3 against unranked teams since the start of the 2012 season.