No. 6 Ohio St. looks to continue roll at struggling Nebraska 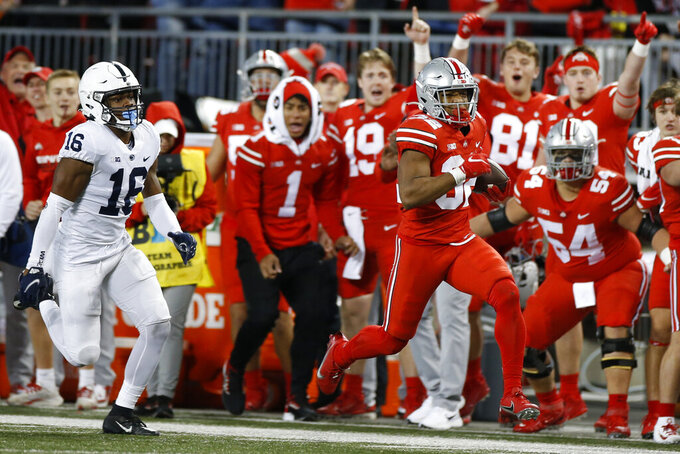 Line: Ohio State by 14 1/2, according to FanDuel Sportsbook.

The one-loss Buckeyes have no margin for error in their quest to return to the College Football Playoff. Nebraska has lost three straight and five of six, but it has shown an ability to keep it close against top opponents. Just ask Oklahoma, Michigan State and Michigan. Cornhuskers coach Scott Frost is on the hot seat, and his players might be motivated to play for his job.

Ohio State: Freshman RB TreVeyon Henderson has been overshadowed in the Big Ten by Michigan State's Kenneth Walker III. Henderson is averaging a league-best 7.9 yards per carry, is second to Walker at 106 yards per game and has scored 12 touchdowns. He also is coming off a 152-yard night against Penn State.

Nebraska: QB Adrian Martinez played one of his worst games in a loss to Purdue last week, completing less than half his passes and throwing four interceptions. Martinez is the Huskers' No. 1 running threat, and he's hurt the Buckeyes with his legs the past couple years.

Ohio State has won six straight and is averaging 50.8 points per game since losing to Oregon on Sept. 11. The defense is allowing just 13.6 points per game over the same span. ... The Buckeyes have won 23 consecutive Big Ten games, which is the longest streak in the conference since the Buckeyes’ national record, 30-game conference winning streak from 2013-15. ... Ohio State’s defense has scored six touchdowns, most of any defense in the FBS. ... Huskers will be playing their fourth ranked opponent, including the third in the top 10. ... Nebraska and Ohio State are in the final year of a six-year stretch of meeting every season as cross-division opponents. The next meeting is scheduled for 2024 in Lincoln.