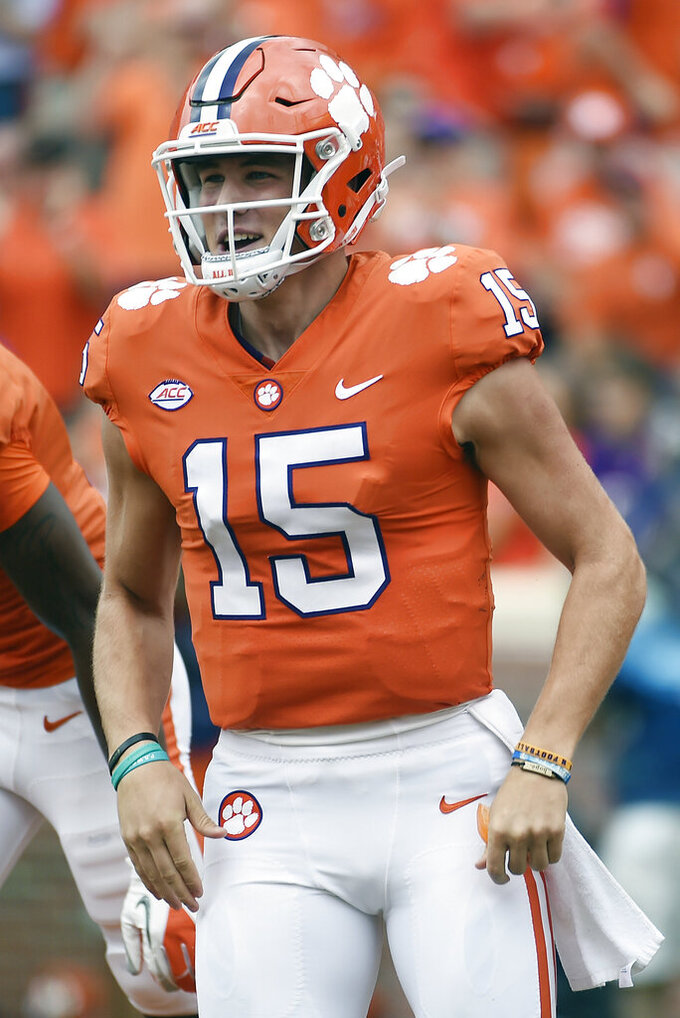 FILE - In this Oct. 7, 2017, file photo, then-Clemson quarterback Hunter Johnson celebrates after throwing a touchdown against Wake Forest during the second half of an NCAA college football game in Clemson, S.C. As he listened to his team’s introduction during last month’s Big Ten Kickoff Luncheon, Northwestern coach Pat Fitzgerald was a bit stunned by what he heard. “Clayton Thorson leaves as the winningest quarterback in Northwestern history,” the Big Ten Network’s Rick Pizzo said, reading from a script. “But he’ll be replaced by five-star Clemson transfer Hunter Johnson.” That was news to Fitzgerald, who said the competition for starting quarterback at the beginning of fall camp was wide open with Hunter, senior TJ Green and junior Aidan Smith being the main contenders. (AP Photo/Rainier Ehrhardt, File) 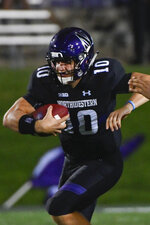 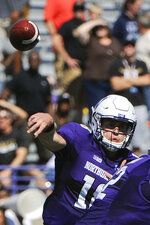 EVANSTON, Ill. (AP) — As he listened to his team's introduction during last month's Big Ten media days, Northwestern coach Pat Fitzgerald was a bit surprised by what he heard.

"Clayton Thorson leaves as the winningest quarterback in Northwestern history," a Big Ten network announcer said, reading from a script. "But he'll be replaced by five-star Clemson transfer Hunter Johnson."

That was news to Fitzgerald, who said the competition for starting quarterback at the beginning of fall camp was wide open with Hunter, senior TJ Green and junior Aidan Smith the main contenders.

"I wasn't aware we had done that," Fitzgerald said with bemusement a week later. "I think everybody in our program knows the battle's ongoing."

Green is the only one with significant playing time. He played in nine games last season, finishing with 20 completions for 169 yards. And while Green and Smith have the reps in the Northwestern offense, the expectation from just about everyone is that Johnson will get the no because of his star potential.

Coming off a 9-5 season that included a Big Ten West title and a Holiday Bowl victory over Utah, the Wildcats have enough returning talent at other positions to produce another stellar season — if they can get steady play at quarterback. Fitzgerald, entering his 14th season at the school, believes he and offensive coordinator Mick McCall have a plan to make that happen.

"We've kind of been there and done that as a staff," Fitzgerald said. "We'll continue to work the plan and let this thing move forward organically."

Whoever wins the quarterback job will have a lot of returning talent at the skill positions. Sophomore running back Isaiah Bowers took over in the fourth game last season as a true freshman and finished with 866 yards and six touchdowns. There's also a deep group of receivers, including senior Bennett Skowronek, junior Riley Lees and sophomore JJ Jefferson, who should provide a deep threat that was missing a year ago.

The defense again should be a strength led by junior linebacker Paddy Fisher (all-Big Ten first team with 116 tackles) and senior defensive lineman Joe Gaziano (7.5 sacks and 12.5 tackles for loss). The defensive backfield is also deep and talented.

Running back Jeremy Larkin was off to a fine start last year as a sophomore — 346 yards rushing and five touchdowns in five games — before he had to medically retire after being diagnosed with cervical stenosis. Larkin is still with the program and is assisting running backs coach Lou Ayeni.

"We'd all like to see him out there toting the rock," Fitzgerald said. "It's heartbreaking to know he doesn't get a chance to play the game he loves. But every challenge is an opportunity and he's run with that opportunity. He's been phenomenal. He's in early and stays late. He's been an asset to Ayeni."

Despite the division title, Fitzgerald believes his program doesn't get the respect it deserves nationally because of last season's 1-3 start and a host of non-conference losses the last few years.

"Winning 36 games the last four years puts us 14th in the country, but I think nationally the people that don't cover us or the Big Ten regularly, they kind of define us by a handful of games and they're all losses," he said. "Multiple Duke losses, a loss to Western Michigan, a loss to Illinois State, a loss to Akron last year. That ends up being our national narrative. I told the team if you want to change that, you have to go out and earn it."

Northwestern's schedule is frontloaded: The season opener is on the road Aug. 31 against Stanford and the first five games of the Big Ten slate are rugged: Home against Michigan State, road trips to Wisconsin and Nebraska, then back home for Ohio State and Iowa. Late in the season, the Wildcats get three straight home games before the finale against in-state rival Illinois on Nov. 30.