Oklahoma State AD Holder to step down; Weiberg to take over 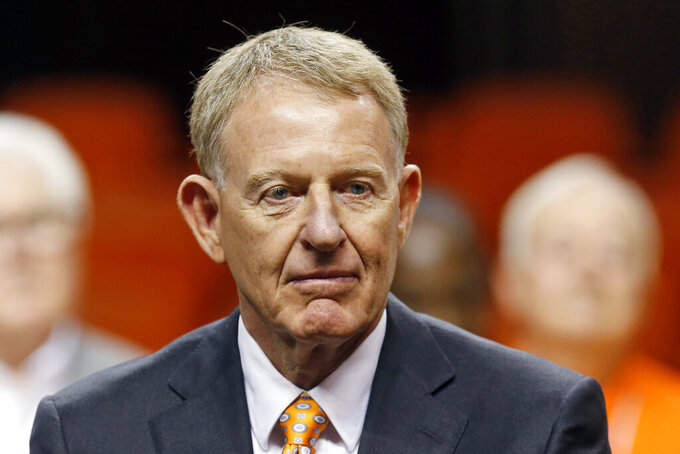 FILE - In this March 23, 2016, file photo, Oklahoma State athletic director Mike Holder watches during a news conference to introduce Brad Underwood as the new Oklahoma State NCAA college basketball coach in Stillwater, Okla. Holder will step down after 16 years and Chad Weiberg will replace him. The school says the moves will be effective July 1. Holder took over in 2005. (AP Photo/Sue Ogrocki, File_

Oklahoma State athletic director Mike Holder will step down this summer after 16 years and will be replaced by deputy AD Chad Weiberg.

Oklahoma State said Thursday the moves will be effective July 1.

“It is hard to describe the magnitude of the impact Mike Holder has had on Oklahoma State athletics during his 16-year tenure,” said Rick Davis, chair of the OSU/A&M regents. “He has elevated our athletic program to a level once unimaginable in national prominence and prestige by developing and building athletic facilities on par with any in the nation."

Holder will continue to support the athletic department as a special adviser, continue to raise funds and work on facility development. Oklahoma State President Burns Hargis said he will recommend Holder’s appointment as athletic director emeritus.

“We are in awe of the massive upgrade in athletic facilities under Mike’s leadership,” Hargis said. “I am personally appreciative of his adherence to honest principles in the performance of his duties leading our athletic department.”

Holder’s run had a few hiccups.

Sports Illustrated said in 2013 that it interviewed more than 60 former players and found evidence of potential NCAA violations under former coach Les Miles and Gundy dating to 2001. After a joint investigation that included the review of approximately 50,000 emails and documents and nearly 100 interviews, the NCAA and Oklahoma State agreed that the most egregious allegations were “fundamentally unfounded.” An NCAA infractions committee put Oklahoma State on a year of probation for failing to follow its own drug-testing policies.

Last year, an NCAA infractions committee panel hit the basketball program with numerous penalties — including a postseason ban — related to findings that former assistant basketball coach Lamont Evans accepted up to $22,000 in bribes intended to help steer athletes to certain financial advisers. The Cowboys, who feature star freshman Cade Cunningham and are ranked 17th in the nation, are eligible for postseason play during the appeal process.

Weiberg is expected to sign a four-year contract at $750,000 annually. He became deputy athletic director at his alma mater in 2017. His father, Mick, coached on Paul Hansen’s basketball staff in the 1980s.

“I am humbled by this opportunity," Weiberg said.