Oliver, surging Houston look for a win vs struggling Navy 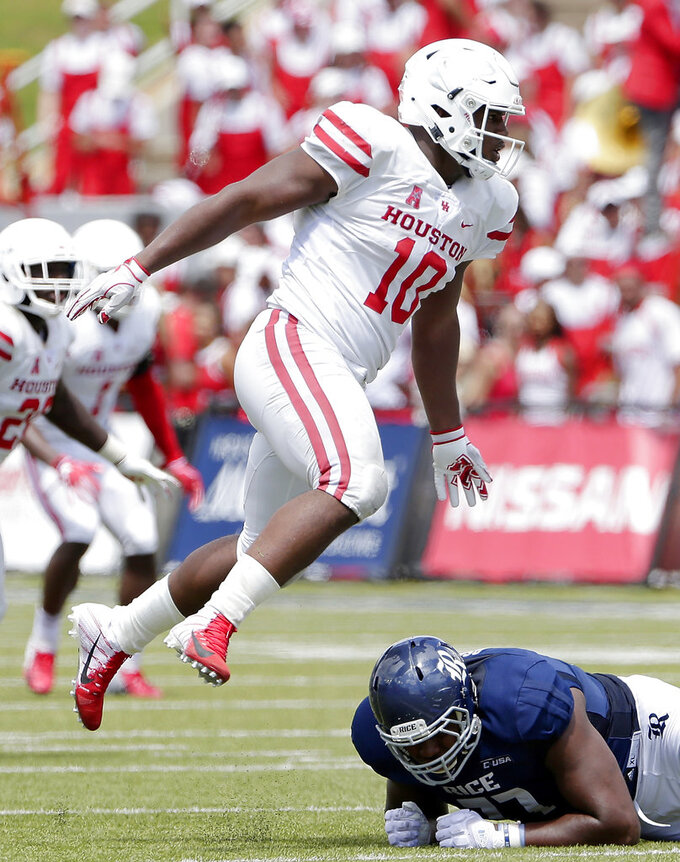 FILE - In this Sept. 1, 2018, file photo, Houston defensive tackle Ed Oliver (10) jumps over Rice offensive lineman Uzoma Osuji during a NCAA college football game, in Houston. Mired in a three-game losing streak and desperate to get some production from its struggling offense, Navy faces the unenviable task of going up against surging Houston and standout defensive tackle Ed Oliver. (AP Photo/Michael Wyke, File) 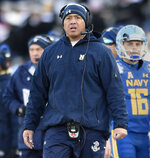 ANNAPOLIS, Md. (AP) — Mired in a three-game losing streak and desperate to get some production from its struggling offense, Navy faces the unenviable task of going up against surging Houston and standout defensive tackle Ed Oliver.

If the Midshipmen only had to worry about Houston's explosive offense, that would be quite enough. Oliver, however, makes winning on Saturday an even tougher proposition.

Oliver tied an American Athletic Conference single-game record last week against East Carolina with five tackles for loss, including two sacks, in a 42-20 rout that propelled Cougars (5-1, 2-0) into sole possession of first place in the West Division.

Navy coach Ken Niumatalolo said Oliver is one of two defensive linemen for which his coaching staff has needed to prepare a special game plan. Aaron Donald, the 2013 Outland Trophy winner at the University of Pittsburgh, was the other. Donald is a four-time Pro Bowl selection with the Los Angeles Rams and was named 2017 NFL Defensive Player of the Year by The Associated Press.

Oliver, a junior, is "dynamic and disruptive," according to Niumatalolo.

The 2017 Outland Trophy winner, who will no doubt turn professional after this year, has amassed 184 career tackles — 50 of them for a loss.

"What Oliver did against us a couple years ago, I'd never seen anybody play like that," Niumatalolo said. "His cardio is amazing. He's relentless and doesn't seem to get tired. He chases the ball from beginning to end."

Some other things to know about the Houston-Navy matchup:

Niumatalolo faces uncertainty at quarterback. Senior Garret Lewis made his second career start last Saturday and performed adequately during a 24-17 loss to Temple. Lewis rushed for 58 yards and a touchdown while directing three scoring drives.

Malcolm Perry was the team's starting quarterback through five games, but was moved to slotback against Temple. Niumatalolo said afterward that decision had more to do with how thin the Midshipmen were at slotback because of injuries.

Senior Zach Abey, who started nine games at quarterback in 2017 and posted the second-highest single-season rushing total in program history, is also in the discussion to start Saturday.

"You have to be prepared for anybody a team could possibly play at quarterback," Houston coach Major Applewhite said. "Defensively, we have to prepare certain packages for whether it's Abey, Perry or Lewis. We know all those guys can operate their system and have done so this season."

Quarterback D'Eriq King is the trigger man of a Houston offense that ranks fourth nationally with an average of 552.8 yards. The Cougars are third in the country in scoring offense at 48.7 points per game.

"They are a machine right now. Nobody has been able to stop them," Niumatalolo said. "They can hurt you in so many places. It's not like you can focus on one or two guys. They have so many weapons."

Navy ranks 100th out of 129 Football Bowl Subdivision schools and 11th out of 12 teams in the AAC in total offense with an average of 365 yards per game.

During regulation of its last four games (Memphis, SMU, Air Force, Temple), Navy is averaging less than 17 points. Applewhite said the Cougars must expect the Midshipmen to operate the triple-option offense with the precision they have shown in past seasons.

"We know what they're capable of. I don't spend a whole lot of time worrying about previous seasons or previous games," Applewhite said. "You always get ready for someone's best. They have playmakers that can create issues for you on offense."

Applewhite said a major focus during practice this week was eliminating penalties. Against East Carolina, the Cougars were whistled for 12 infractions for 115 yards, both season highs.

"It was frustrating. It just seemed like we couldn't get out of our own way," Applewhite said.

Houston had five holding calls, including one on defense that wiped out an interception. There were also three false starts, two pass interferences, an illegal man downfield and a personal foul for targeting that led to the ejection of safety Gleson Sprewell.