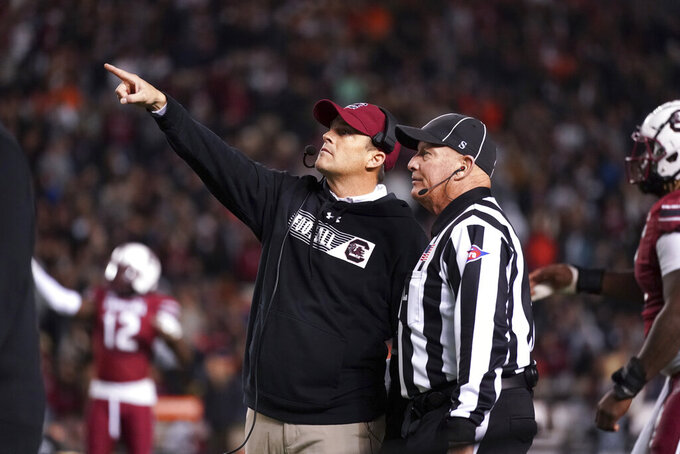 Hearing about beating Clemson and actually knocking off the Tigers are different things — particularly for South Carolina.

The Gamecocks (6-5) haven't been able to topple Clemson for most of the past decade. South Carolina capped off a five-game win streak against the Tigers in 2013. Since that victory, it has been all Clemson for the past six meetings. The streak most likely would've grown to seven straight Tiger victories had COVID-19 not canceled the contest in 2020.

“There's a lot of excitement from our standpoint just to go compete against a program whose track record speaks for itself,” Beamer said.

Beamer's Gamecocks have won three of the last five Southeastern Conference games including wins over Florida and Auburn.

A bounce here, a tackle there and it could've been even better, South Carolina tight end Nick Muse said.

Clemson also has reason for optimism with four straight wins after opening 4-3 and falling out of the Top 25 and the national picture. The Tigers had their most complete showing of the season last Saturday as they walloped No. 21 Wake Forest 48-27, the only ranked win they have.

Clemson coach Dabo Swinney hated missing the rivalry game last year because of what it means to the people of the Palmetto State.

“It impacts everyone. They’re going to talk about it at church, dinner, Thanksgiving and it’s just a part of the DNA of this state,” Swinney said. "It’s fun to be a part of something like that. It’s better when you win, that’s for sure.”

Clemson still has a shot at winning the ACC Atlantic if No. 24 North Carolina State loses at North Carolina on Friday and No. 21 Wake Forest falls at Boston College on Saturday. The Tigers will know their fate before kickoff at South Carolina. Clemson coach Dabo Swinney is keeping his players locked on South Carolina.

“We can't control it,” Swinney said. “We've done all we can. We can't waste energy focusing on that.”

COACHES OF THE YEAR

Clemson's Swinney said the job Shane Beamer's done at South Carolina warrants attention for SEC coach of the year. It was no surprise that Beamer answered back by praising how Swinney deserves the ACC coach of the year honors after leading his team back into contention after a poor start. Both were assistants and recruiting coordinators at their respective schools in the late 2000s.

South Carolina tight end Nick Muse, the younger brother of former Clemson safety Tanner Muse who played for the Tigers from 2016-19, was asked if he had any old Clemson gear around. He acknowledged that he does, though apparently doesn't wear it.

“Now, I hate Clemson,” he joked. “Times change and so do people.”

Clemson freshman tailback Will Shipley believes the running back room is much more cohesive than earlier in the season. He said at that time some players were jealous of others and their playing time. Shipley's words gave insight into why running backs Lyn-J Dixon and Michael Dukes entered the transfer portal earlier this season.

The harmony was apparent last week when Kobe Pace ran for 191 yards and two TDs while Shipley gained 112 yards and two touchdowns. Shipley said that's different than the “jealousy and bad makeup in our room earlier this season.”

Swinney shared a story of how Beamer asked him for some Clemson gear for 8-year-old Hunter Beamer, Shane's son, when he was coaching at Oklahoma. Beamer said his son was a fan of Clemson QB Trevor Lawrence.

“He liked watching Clemson, I don’t want to go so far as to calling him a Clemson fan,” the elder Beamer said. Asked if Hunter still has his Clemson stuff, dad chuckled, “He better not.”