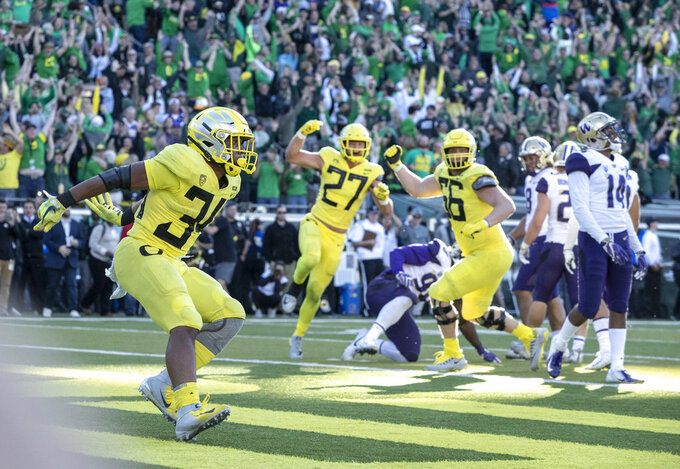 SEATTLE (AP) — Chris Petersen quietly delivered a message during his weekly media briefing that not everything is going wrong for Washington even as he prepared to field questions about what happened in the Huskies' loss to rival Oregon.

The coach wore a black T-shirt Monday with the phrase "Stay Positive" printed on it. He wore it Sunday as well as the 15th-ranked Huskies were coming to grips with the 30-27 overtime loss that likely ended Washington's hopes of finding its way back to the College Football Playoff.

"I need 25 of these just to keep recycling them every day," Petersen joked.

Petersen has spent the last couple of days analyzing what went wrong. He acknowledged he would like a "do-over" of the final minute of regulation that ended with walk-on freshman Peyton Henry missing a 37-yard field goal attempt that sent the game to overtime.

"We've practiced that exact situation for probably the last eight weeks — that hash, that situation, calling time out," Petersen said. "Now the games are different than practice. I think everybody on our sideline thought we would get that done. But for me to have a do-over knowing what I know now to get the ball a little closer for him? Yeah."

Petersen's decision to get conservative in the final minute of the game was a surprise considering how aggressive the Huskies had been in getting into field goal range. The drive by senior quarterback Jake Browning would likely have been remembered in Washington lore if the kick had been good.

But instead of getting closer and giving Henry a chance at a shorter attempt, Petersen and his staff essentially stopped. And the Huskies lost.

"You feel like you have a really good chance to make it. From everything we've seen in practice for a long period of time now, and you do what you think is right and what is best," Petersen said. "But we're not going to take a shot in the end zone at that situation to chance that ball getting picked off, to get knocked back out of field goal range or something like that. And we're also exactly where we want to be hash-wise."

Here's how the final 90 seconds went:

Washington faced fourth-and-3 at the Oregon 33 with 1:12 left after the Ducks called timeout. The Huskies converted the fourth-down attempt on a 4-yard pass from Browning to Sean McGrew. After an 8-yard run by McGrew to the Oregon 22, Washington called timeout with 43 seconds remaining and still had two timeouts left.

That's when Washington switched to a head-scratching approach.

McGrew ran for a 1-yard gain out of the timeout and then uncertainty set in, even with the opportunity to stop the clock while facing a third-and-1. Rather than calm the players, the Huskies sideline did nothing. There wasn't another offensive play run before Petersen called timeout with three seconds left and Henry trotted out for his attempt.

Petersen said afterward that a few more yards probably wouldn't have mattered and the Huskies were "close to where we wanted to be."

But if Henry had attempted the same kick from 5 or 8 yards closer, there's a chance it could have slipped inside the right upright and Washington would have left Autzen Stadium with a victory and still in the thick of the playoff conversation.

Instead, Henry missed, the game went into overtime and the Ducks' C.J. Verdell scored on a 6-yard run to win it for No. 12 Oregon.

Now the Huskies' best hope is a conference title and a trip to the Rose Bowl. The Pac-12 seems destined to be left out of the playoff for a second straight year.

"We make the kick ... I'm not wearing this shirt. We're having a different conversation," Petersen said. "We know that but it is what it is."

NOTES: Petersen said running backs Myles Gaskin (shoulder) and Salvon Ahmed (knee) are week-to-week after getting banged up against the Ducks. Both played sparingly in the second half. ... WR Quinten Pounds is out for the season due to a knee injury suffered against UCLA.