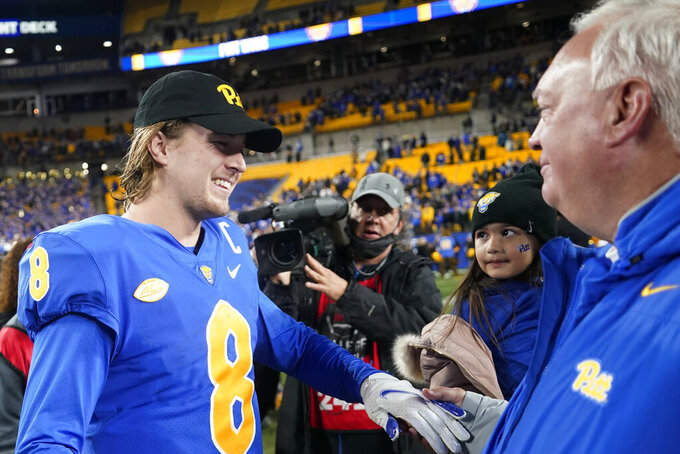 The team made the announcement on Tuesday, a day after Pitt quarterback Kenny Pickett was named one of the four finalists for the Heisman Trophy.

Whipple spent three seasons with the Panthers and put together one of the most dynamic offenses in the country in 2021. No. 12 Pitt finished the regular season 11-2 and won its first Atlantic Coast Conference title behind an attack that averaged 43 points, third among FBS teams behind Western Kentucky and Ohio State.

The well-traveled Whipple worked closely with Pickett, helping him put together the best season by a Pitt quarterback. Pickett set a slew of school records in 2021, including touchdown passes in a season (42) and career touchdown passes (81), marks previously held by Pro Football Hall of Famer Dan Marino.

“During his three seasons at Pitt, Mark Whipple was a great asset for our entire football program,” coach Pat Narduzzi said in a statement. “He did a tremendous job transitioning us from a heavy run attack to one of the best passing games in the entire country. His great work with quarterbacks was obviously on full display, given the outstanding year Kenny Pickett has enjoyed.”

It's unclear who will take over the offense for the Panthers when they face No. 10 Michigan State in the Peach Bowl on Dec. 30.

The 64-year-old Whipple's career has included multiple stops in the NFL as a quarterbacks coach and head coaching stints collegiately at Massachusetts and Brown. He also spent two years as the offensive coordinator at Miami.