Rested and ready: No. 2 Ohio St opens 2nd half against Iowa 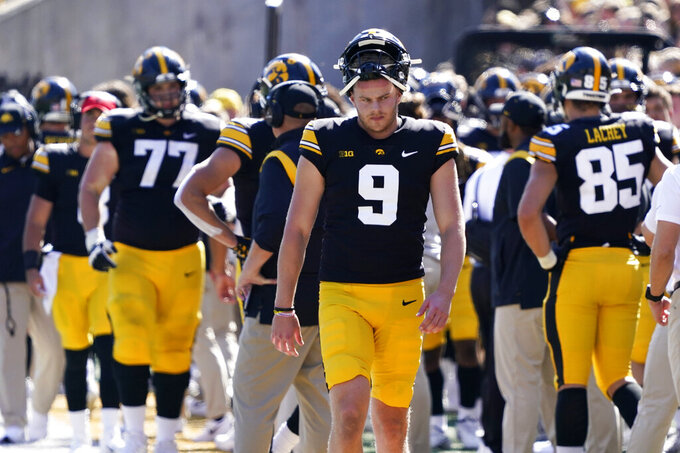 After all, upcoming opponent Iowa took the Buckeyes by surprise in 2017. Ranked No. 6 at the time, Ohio State went to Iowa City as a three-touchdown favorite and were walloped 55-24 by the unranked Hawkeyes.

“That was a tough day for all of us,” recalled Ohio State coach Ryan Day, who was in his first year as an assistant on Urban Meyer's staff in 2017. “So yeah, any time you have a scar like that, it's real.

Second-ranked Ohio State (6-0, 3-0 Big Ten) has one of the most explosive and highest-scoring teams in the country, not to mention a top 10 defense.

The Hawkeyes have been propped up by their defense, but the offense is woeful — dead last among 131 D-I teams.

The Hawkeyes (3-3, 1-2) sneaking up on the Buckeyes at Ohio Stadium on Saturday would be more than stunning.

The key for four-touchdown favorite Ohio State will be not looking past Iowa to the matchup a week later with No. 16 Penn State and, of course, to the Nov. 26 game against No. 4 Michigan.

Any loss in the season's second half will deal a devastating blow to the fortunes of an Ohio State team convinced it can win a national championship.

“I think that three of the Top 10 teams in the country lost this past weekend, so that’s the whole emphasis of ‘competitive stamina,’” Day said, repeating the maxim borne out of the loss to Michigan last fall that shot down the Buckeyes' season. “You’ve got to bring it every single week. And we know the challenges ahead are bigger.”

Iowa coach Kirk Ferentz will look to his defense, which has limited its opponents to an average of 265 yards per game, to try to slow down Ohio State, which can almost score at will.

“Every play you’ve got to be on top of your game or it can be sudden death real fast for you," Ferentz said.

The Iowa offense is averaging just 238.8 yards per game (compared with Ohio State's 543.7). Fifth-year quarterback Spencer Patras' 54% completion rate is seventh worst in the nation, and he's thrown only two touchdowns. The running game is struggling, too, managing just over 82 yards per game.

Ohio State's red-zone efficiency is the best in the nation. In 29 trips to the zone, the Buckeyes have scored every time. All but two were touchdowns.

“I think we’ve had good balance down there," Day said. “I think we’ve been able to run the ball when we needed to. But also, we’ve thrown the ball well, and that’s going to be important heading in the second half of the season."

Linebacker Jack Campbell is the leader of an Iowa defense that will have to be its best to not get run over by the Buckeyes. The AP Preseason All-American is averaging double-digit stops again, while the unit has allowed 10 points or fewer in five of the team’s first six games – a first for the program since 1933.

The off week gave the Buckeyes a chance to get some of their offensive stars healthier, but top receiver Jaxon Smith-Njigba is still a question mark. Smith-Njigba, an AP Preseason All-American, suffered a hamstring injury in the opener with Notre Dame and has been on the shelf ever since. Running backs TreVeyon Henderson and Miyan Williams have missed games because of injuries. If both are healthy Saturday, they'll likely split the carries.