Rutgers will try to slow down hot Fields, No. 3 Buckeyes 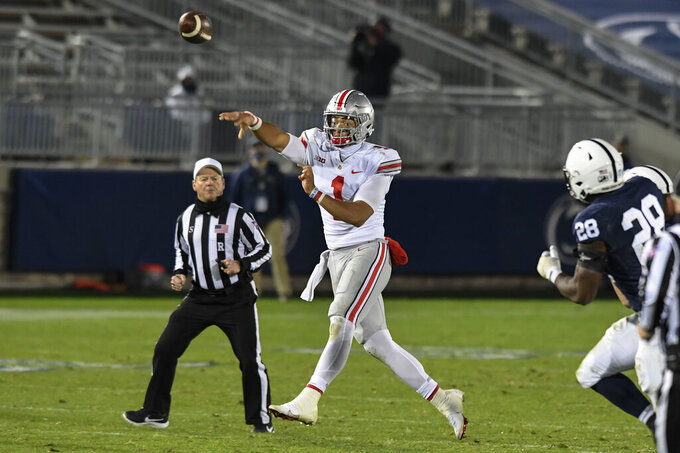 Ohio State came out blazing in the pandemic-delayed season, shooting down Nebraska and then No. 18 Penn State last week. Buckeyes quarterback Justin Fields is looking every bit like a Heisman Trophy candidate — he was a finalist last season — and is surrounded by weapons. Rutgers stunned Michigan State in Week 1 and might be better than expected in Greg Schiano's second stint in charge.

Fields is completing passes at will. That will be a challenge for the Rutgers defense, which is improved this season but still has surrendered an average of 278.5 passing yards and 32 points in the first two games. Fields is averaging 297 passing yards and already has six TD tosses.

Rutgers: LB Olakunle Fatukasi is second in the Big Ten with 24 tackles. He recorded a career-high 14 tackles with 2 1/2 sacks in last week's loss to Indiana. He was named Big Ten co-defensive player of the week after the opening win over Michigan State, posting 10 tackles, two fumble recoveries and a forced fumble.

Ohio State: Slot receiver Garrett Wilson showed his versatility on the first play from scrimmage last week when he went around the left end on a jet sweep for 62 yards to set up the first score. He's caught 18 passes for 240 yards, second best in the Big Ten.

Schiano was Ohio State defensive coordinator in 2016-18. ... Ohio State, then ranked second in the nation, won last year's meeting 56-21. ... The Buckeyes have won 15 consecutive Big Ten games and have outscored opponents in that stretch 702-285. ... Fields has completed 87.3% of his passes. ... Rutgers DB Brendon White played in 29 games at Ohio State from 2017-19 and was the 2019 Rose Bowl Defensive MVP. ... The Scarlet Knights have beaten AP Top 25-ranked teams nine times but not since 2009 when they upset No. 23 South Florida. ... Rutgers is ranked fourth in the nation in rushing defense (79.5 yards per game). ... Olave and Wilson became the first pair of Ohio State receivers to each record 100 receiving yards in consecutive games. ... The Scarlet Knights have surpassed last season’s touchdown output in Big Ten play in the first two weeks.