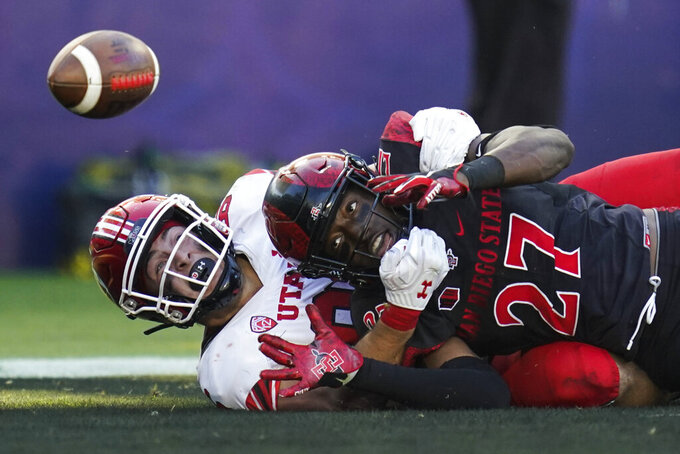 Utah tight end Dalton Kincaid (86) and San Diego State safety Cedarious Barfield (27) try to catch a pass intended for Kincaid in the end zone during the first half of an NCAA college football game Saturday, Sept. 18, 2021, in Carson, Calif. The pass was incomplete. (AP Photo/Ashley Landis)

CARSON, Calif. (AP) — By the time San Diego State dialed up a successful Philly Special on its final 2-point conversion attempt, it wasn't even the craziest part of the Aztecs' triple-overtime thriller with Utah.

And after one last video review went their way, the Aztecs could celebrate another win over a Pac-12 foe.

Quarterback Lucas Johnson caught a 2-point conversion pass from Jesse Matthews in triple overtime, and San Diego State blew a 14-point lead in the final minutes of regulation before hanging on for a 33-31 victory over the Utes on Saturday night.

“It was exciting,” Aztecs coach Brady Hoke said. “I’m not going to deny that.”

Johnson scored easily on a picture-perfect Philly Special after both teams' kickers missed field goal attempts in double overtime. Moments later, the Aztecs (3-0) collectively ran across the field in a frenzy when officials reversed their call of a 2-point conversion catch by Utah's Connor O'Toole, ruling the ball hit the turf.

“I still can’t believe it,” Aztecs defensive lineman Cameron Thomas said. “When it was official, I was so excited. I don’t even know what was going through my mind. I’m excited to keep this season rolling.”

Greg Bell rushed for 119 yards and two touchdowns and Jordan Byrd returned a kickoff 100 yards for a TD, but the Aztecs passed for only 44 yards and nearly gave away their second straight victory over a Pac-12 opponent after beating Arizona last week.

“It was an amazing feeling to fight back from the situation we were in and dig ourselves out of that hole,” said Rising, a native of nearby Ventura County. “It was a great feeling, but we’ve just got to finish.”

Britain Covey caught a short TD pass from Rising with 4:17 left, but Jadon Redding missed Utah's extra point. Rising got the ball back with 2:36 left and led a 74-yard drive, hitting Theo Howard with a 4-yard TD pass and finding Solomon Enis for the 2-point conversion with 16 seconds left.

“He’s a competitor,” Utah coach Kyle Whittingham said of Rising. “Doesn’t take anything away from Charlie, but Cam came in and gave us that spark with his legs as well as his arms. ... We needed a spark. We were looking for something, and we’ve got an excellent No. 2 quarterback in Cam Rising, and why not give him a shot?”

Whittingham said the coaches will choose next week's starting quarterback after watching film Sunday, but they might not announce it.

Both teams threw TD passes in the first overtime. Redding then missed a 37-yard field goal attempt in the second OT, but Matt Araiza missed a 36-yard attempt for the Aztecs.

Covey returned a punt 80 yards for a touchdown in the first quarter for Utah, which is off to a 1-2 start in consecutive seasons for the first time in Whittingham's 17-year tenure.

Bell made a pair of 7-yard touchdown runs 42 seconds apart in the third quarter separated by Tayler Hawkins’ interception.

Utah starting DT Viane Moala left the field prone on a cart with 8:43 to play.

Utah: Rising's excellent play was a boon for a struggling offense, but this could be an ugly season for a perennial winning program if the offensive line doesn't improve soon. Brewer and his blockers frequently looked overmatched against another solid defensive line, and better groups likely await in the Pac-12.

“We didn’t run the football very well at all,” Whittingham said. “We got beat up pretty good by their defensive front seven.”

San Diego State: Utah was a significant step up in competition, and the Aztecs survived. They could get Top 25 consideration next month with a few more wins.

San Diego State: Back to Carson next Saturday, Sept. 25, to host FCS opponent Towson (1-2), which will have a 5,400-mile round trip from Maryland to Los Angeles.