SEC could boast best QB crop of any conference in history 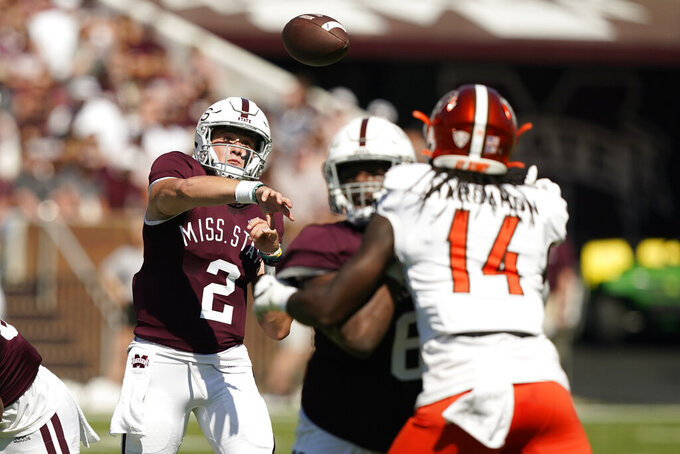 For four quarters, Tennessee quarterback Hendon Hooker and Florida counterpart Anthony Richardson went back and forth before more than 100,000 fans packed inside Neyland Stadium in one of the most entertaining games of the season.

“The big thing for him,” Florida coach Billy Napier said, “is I saw him kind of flip the switch as a competitor, and really just get consumed with, ‘Hey, look, this is my team. I’m going to take my team, we're going to beat your team.' I am going to do everything I can to help my teammates and help our team win, and just compete and not worry about anything else."

There's a lot of quarterbacks in the SEC that are flipping that switch these days.

In fact, this may be the best crop of signal-callers in a single season in the history of the ever-expanding league.

Stetson Bennett has defending national champ Georgia atop the AP poll again this week after another solid performance in a largely forgettable win over Kent State. Just behind is Alabama and Bryce Young, the reigning Heisman Trophy winner who could be the top QB chosen in the NFL draft unless Ohio State's C.J. Stroud has something to say about it.

Will Levis may be the fastest-rising prospect in the entire nation for No. 7 Kentucky, especially after outdueling Richardson earlier this season in the Swamp. And to his credit, many have mocked Richardson — at 6-foot-4, 230 pounds he's drawing plenty of comparisons to Buffalo Bills quarterback Josh Allen — joining Young and Levis in the first round of the NFL draft.

And to think that none of them is even leading the SEC in passing. That honor belongs to Mississippi State's Will Rogers, who has been operating coach Mike Leach's Air Raid offense to the tune of 356.5 yards passing per game, and just threw for 409 yards and just matched his own school record with six touchdown passes in a 45-14 win over Bowling Green.

“I like it when we can really go fast, push the tempo and not wait for teams to set up and come at us,” Rogers explained this week. “When we're in attack mode like that, that's when we're at our best.”

The SEC has had plenty of bruising defenses over the years — Alabama and Georgia, most recently — but ever since the days of Steve Spurrier at Florida the league also has showcased a hard-won reputation for wide-open offenses.

The reason has usually been the quarterback play.

Those were pretty good years for the conference.

Might not be as good as this one, though.

In fact, since Wuerffel won the Heisman Trophy in 1996, and Peyton Manning finished eighth the same year, the SEC has had 13 different QBs combine to finish in the top five in voting 16 times. That includes winners Tim Tebow of Florida in 2007, Cam Newton of Auburn in '10, Texas A&M's Johnny Manziel in ‘12, and LSU star Joe Burrow in 2019, along with runner-up seasons by Manning, A.J. McCarron and Tua Tagovailoa, who is blossoming into a star with the Miami Dolphins.

Oh, it also includes the Heisman Trophy that Young won just last year. Now, the Alabama quarterback could join Ohio State running back Archie Griffin as the only two-time winners of the most prestigious individual accolade in the game.

“I'm getting old, man,” Young said jokingly this week, when asked about making his 20th career start Saturday at No. 20 Arkansas. “I definitely feel more comfortable — I've seen more live reps, put in different situations. At this point, I've been here a good amount. You feel comfortable in all types of situations. And we can say that as an offensive unit.”

Young paused, then added something that probably makes the rest of the quarterback-heavy SEC shudder.