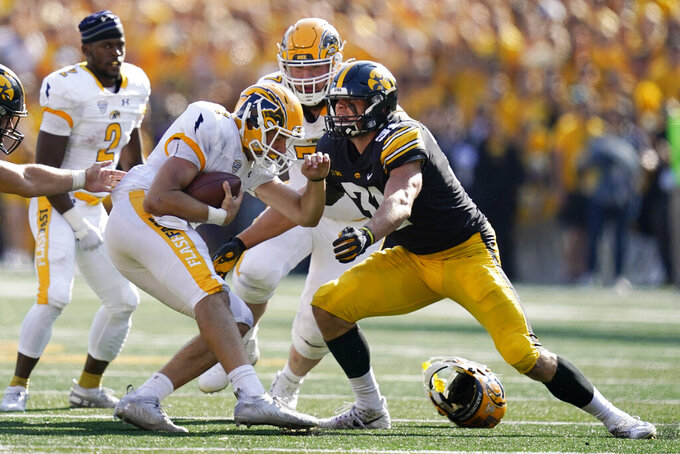 FILE - Kent State quarterback Dustin Crum (7) is sacked by Iowa linebacker Jack Campbell (31) during the first half of an NCAA college football game in Iowa City, Iowa, in this Saturday, Sept. 18, 2021, file photo. Iowa linebacker Jack Campbell has become a one-man wrecking crew. He's the Hawkeyes' leading tackler by far, his scoop and score broke open the Hawkeyes' win over Iowa State, and his fumble recovery set up the tying touchdown in a come-from-behind win over Colorado State. (AP Photo/Charlie Neibergall, File)

IOWA CITY, Iowa (AP) — Jack Campbell remembers the questions about him when he was being recruited.

Some coaches were worried about the height of the Iowa linebacker.

One coaching staff had a different concern.

“I didn’t have the right ankle bend, or something like that,” he said.

“If it were up to me, he would be a center or a defensive end, but I got nixed on both of those,” Ferentz said Tuesday. “Vetoed badly.”

Now in his third year in the program, no one thinks Campbell is miscast as a linebacker.

“He just sets a tone with the way he plays,” safety Jack Koerner said. “You guys saw that the other day.”

Campbell was named Bronko Nagurski National Player of the Week and the Big Ten defensive player of the week after he made a career-high 18 tackles in the No. 5 Hawkeyes’ 24-14 win over Colorado State.

Campbell is averaging a team-leading 10.8 tackles per game to rank second in the conference and eighth nationally.

“I don’t think it’s a surprise the way he’s playing,” Ferentz said. “It’s just who he is. He’s got one speed.”

Campbell has played a role in three of Iowa's nine takeaways this season. He returned a fumble for a touchdown against Iowa State, forced a Kent State fumble at Iowa’s 1-yard line and recovered a fumble at the Colorado State 6 to set up the tying touchdown in the second half last Saturday.

“I just try to get around the ball, first and foremost,” Campbell said. “And then, usually, good things happen.”

Campbell was a three-star recruit coming out of Cedar Falls (Iowa) High and picked the Hawkeyes over offers from Iowa State, Minnesota and Northern Iowa.

He saw limited action in 11 games in 2019 and got a late start on the pandemic-shortened 2020 season because of a case of mononucleosis. He started the final five games last year and went into spring practice No. 1 on the depth chart at weakside linebacker. He moved to middle linebacker in the fall.

“For me, my mindset is to do everything I can for the team, to put them in the best position,” Campbell said. “If that means sacrificing some part of my body, or something, I’m going to do that. I have complete trust in all of the relationships I have on that field. I don’t want to let anyone down."

He might be 2 or 3 inches taller than the prototypical linebacker, but his body type has not held him back. He seemed to be everywhere against Colorado State.

“It’s just never giving up on a play, no matter how far downfield it is,” Campbell said. “Just giving all-out effort every single time. Eye discipline, fundamentals, it just starts there.”

On the Rams' second possession, which lasted 10 plays, he was in on four tackles, and the first of his three pass breakups forced them to turn the ball over on downs. On his game-turning fumble recovery, the ball bounced right to him after A’Jon Vivens couldn't hold onto a handoff, and Tyrone Tracy Jr. scored on the next play to tie it at 14.

Though the 243-pound Campbell is unusually tall for a linebacker, Ferentz said, he excels because of how he developed himself to play the position and his high intensity in games and practices.

And the people who doubted Campbell have disappeared.