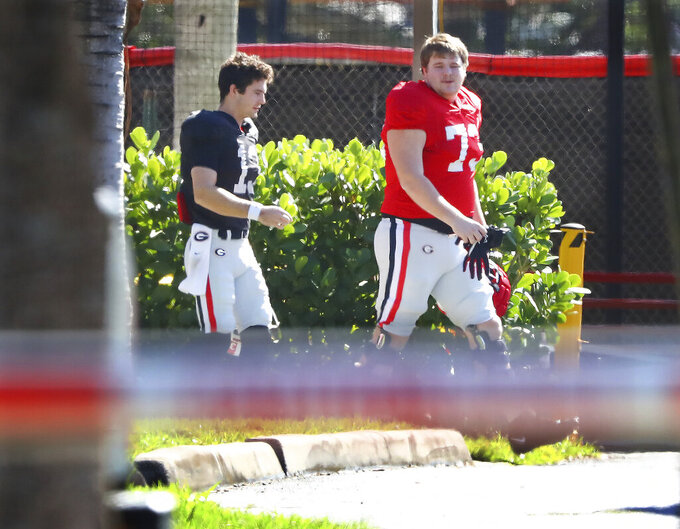 FORT LAUDERDALE, Fla. (AP) — If there was any doubt left about who will be starting at quarterback for No. 3 Georgia against No. 2 Michigan in the College Football Playoff, Bulldogs coach Kirby Smart tried to put an end to it Wednesday.

“Stetson (Bennett) is our starting quarterback,” Smart said during a video conference with reporters.

Smart added that whether backup JT Daniels plays Friday in the Orange Bowl will be determined by the game situation and Daniels' health. Georgia offensive coordinator Todd Monken was asked about the quarterback situation Tuesday and said Bennett was the guy.

Daniels began the season as the starter but an injury opened the door for Bennett, who never relinquished the job.

After Georgia lost to the Southeastern Conference title game to Alabama, with Bennett throwing two interceptions, speculation about a quarterback switch started.

But it has never been more than that. Smart has stressed that the quarterback decision is based on competition and what gives the team the best chance to win.

“It's different than other positions when it comes to making that decision for your whole team, and certainly that guy is the face and the leader of the team and gets the most reps,” Smart said. “I’m confident in Stetson now and I’m confident in JT. I thought Coach Monken did a great job addressing that yesterday, and we’ve got confidence in all our quarterbacks.”

As for Daniels' health, the junior transfer from Southern California did not travel with the team Miami, arriving a day later with receiver George Pickens.

Smart said the Bulldogs dealt with some COVID-19 issues, but gave no specifics.

“We had a little bout the last couple weeks that we lost some guys, and we’ve gotten most of those guys back, and really that’s the biggest thing is being at full strength when you have to be, and that’s what we’re aiming towards," Smart said.

Cincinnati defensive tackle Curtis Brooks doesn’t buy into the notion that it is “now or never” for the Bearcats and a shot at the national title.

“For the seniors, it’s definitely now or never because it’s our last chance. But as far as Cincinnati, I don’t believe this is the last time Cincinnati will be on a stage like this,” Brooks said Wednesday. “The program is headed in the right way in all directions in my opinion. So I really believe Cincinnati is going to become a household name.”

“I’m kind of seeing how it came from the bottom to the top and then now we’re in a nice position. And obviously with the team moving to the Big 12, it’s just more opportunity for guys to really show what they can do,” senior safety Bryan Cook said. “So I would agree with Curtis Brooks as far as it’s just the beginning. You’re going to see a lot of big things from this team moving forward.”

Brooks and Cook are among more than 30 seniors for the Bearcats, who will join the Big 12 no later than the 2025 season.

Brooks said knocking off the Crimson Tide would be a dream come true after watching them so much growing up. Alabama has won six of the last 12 national titles.

“That’s who was on TV all the time. And now we get the opportunity to go play them,” Brooks said. “It’s everything you ask for as a football player.”

This week, The Foundation for Teamwork, which owns and operates the Joe Moore Award, announced it is launching a NIL program that will allow Michigan's offensive lineman to receive some of the proceeds from sales of T-shirts emblazoned with images of the winners.

Some of the money from sales of shirts, which are available to purchase online for $20, will go to the SEAL Legacy Foundation, which supports Navy SEALS and their families, and The AthLife Foundation, which aids children from challenged communities to attain careers beyond sports.

The Foundation Team says the players will receive 100% of the net sales after the charitable donation, and the foundation will match the donation up to $10,000.

The Goodyear Tire & Rubber Co. has reached a multiyear agreement to extend its title sponsorship of the Cotton Bowl, the New Year’s Six game played in the home stadium of the NFL’s Dallas Cowboys.

This year’s game, which is a College Football Playoff semifinal Friday between top-ranked Alabama and fourth-ranked Cincinnati, is the eighth since Goodyear took over as the Cotton Bowl’s title sponsor.

While Goodyear didn’t provide the exact length of the extension, the Ohio-based company’s release made reference to the Cotton Bowl being in the rotation to host another CFP semifinal game at the end of the 2024 season.

Goodyear also extended its agreement with Disney Advertising Sales on behalf of ESPN to be the exclusive aerial coverage provider of the CFP semifinals and national championship on the network.

More than 300 Goodyear tires were used to create likenesses of Alabama mascot Big Al and Cincinnati’s Bearcat mascot. The statues are nearly seven feet tall and weigh more than 200 pounds each.

Cincinnati defensive lineman Curtis Brooks came to the school from Virginia and has learned to like t he city's famous dish — Skyline Chili.

“I first came to Cincinnati, I was not a huge fan of the chili, especially the Skyline,” Brooks said. “But I got some great friends from Cincinnati, Malik Vann, Darrian Beavers, kind of sat me down and forced me to eat it one more time. And I’m actually a huge fan of it now. Crazy.”

Brooks said for those who are Skyline skeptical, the key is repetition.

“You can’t just try it one time. You have to go back and try it again,” Brooks said. “Have to.”