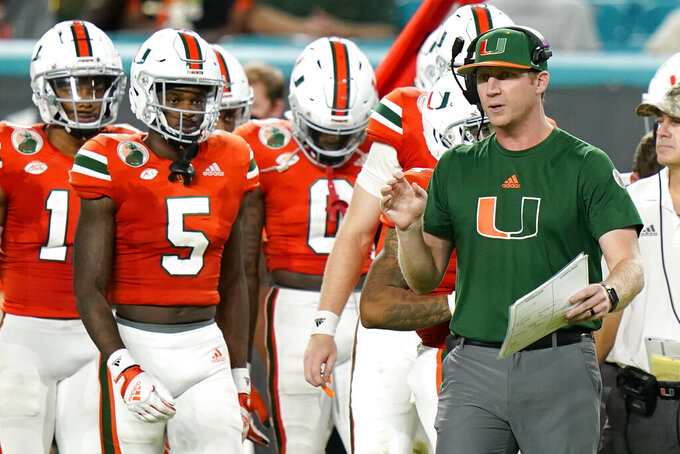 Lashlee had been Miami's offensive coordinator for two seasons after serving in the same role for the Mustangs during Dykes' first two seasons in 2018 and 2019.

“I am humbled and excited to be returning to SMU," Lashlee said. "On the field, we want to build on the foundation of success we’ve established and compete for, and win, championships.”

Dykes spent the past four seasons at SMU and will be introduced as TCU's new coach Tuesday, though neither school has formally announced him as Gary Patterson's replacement.

The 38-year-old Lashlee has been a college offensive coordinator for 11 seasons, at six different schools. He was at Samford in 2011 before serving on Gus Malzahn's staffs at Arkansas State (2012) and Auburn (2013-16). Lashlee spent 2017 at UConn before going to SMU.

“As with previous transitions, our process was thorough and competitive. Ultimately, though, our conversations kept leading us back to one man — Rhett Lashlee,” SMU athletic director Rick Hart said. “Rhett’s ability to connect with recruits, his passion and love for his players and his alignment with our vision and values are among the many reasons he has been selected to lead SMU football.”

The bowl-bound Mustangs (8-4), still among the nation's top offenses at 38.4 points and 465.9 yards per game this season, started 7-0 before losing four of their past five games. SMU averaged nearly 42 points and 489 total yards a game in 2019 with Lashlee as OC before he went to Miami.

The Hurricanes (7-5) have averaged 450 yards and 35 points per game this year, including 530 yards in a 47-10 win at Duke in the regular-season finale Saturday.