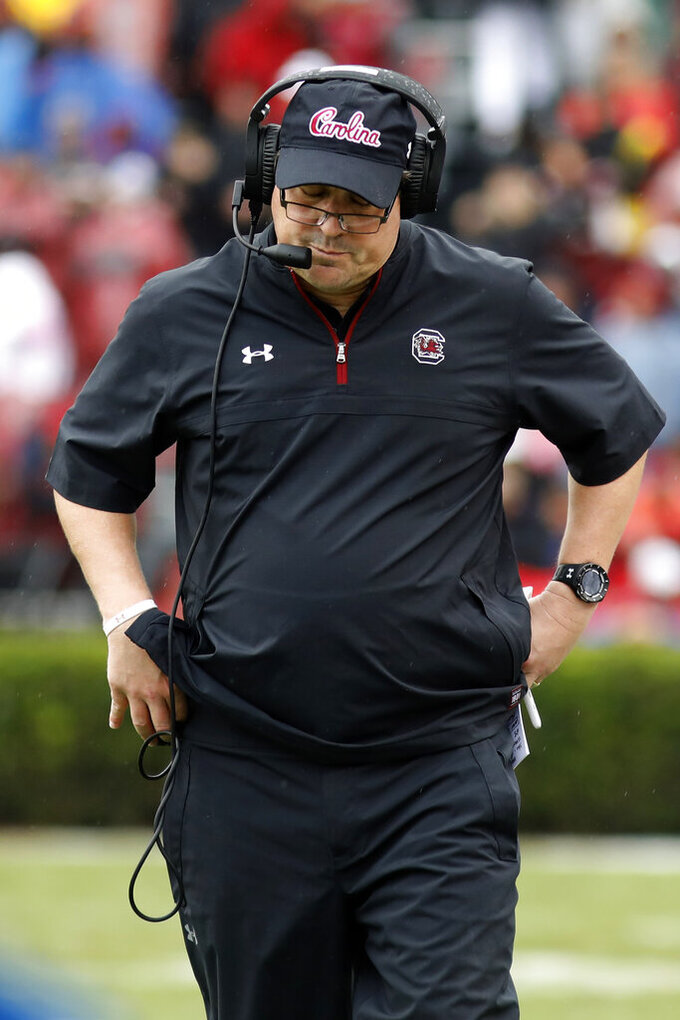 South Carolina's head coach Will Muschamp shows the emotions of the game slipping away against Florida in the second half of an NCAA college football game Saturday, Oct. 19, 2019, in Columbia, SC. (AP Photo/Mic Smith) 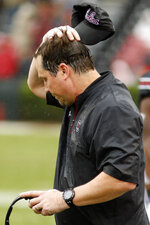 COLUMBIA, S.C. (AP) — South Carolina's football program was placed on probation for the next year by the NCAA for a former assistant coach's impermissible actions in recruiting a sophomore prospect in the spring of 2018.

South Carolina reported the infraction to the NCAA, which considered it a Level II violation. The school and the NCAA handled it through the governing body's negotiated resolution process. The probation, which runs until Oct. 21, 2020, does not include any restriction on postseason competition, according to the NCAA.

The violation involved impermissible texts and in-person contact between the ex-assistant and the high school sophomore. Neither were named in NCAA documents.

South Carolina coach Will Muschamp said he is responsible for all facets of the program, including when things go wrong. "I recognize that a violation occurred within my program and I have taken substantial corrective actions to ensure that similar instances do not continue to occur," he said in a statement.

The NCAA said South Carolina cooperated fully in the investigation.

According to the NCAA, the prospect took a legal unofficial visit to South Carolina in January 2018 for the program's "Junior Day" event. But after that, the former assistant sent him a text saying he was glad he and his mother came to the function, something not allowed ty the NCAA.

In all, the prospect received 13 text messages from the ex-assistant that were against NCAA rules.

Also, the former South Carolina staffer wrongfully arranged an in-person, off-campus visit for the two that took place in May 2018.

South Carolina athletic director Ray Tanner said when the violation was discovered, the department conducted an internal review and worked closely with the NCAA. The governing body said that included making football coaches and documents quickly available to investigators during the 2018 football season.

The NCAA said that while the violation was "willful" and "deliberate," the former assistant immediately "acknowledged the violation and accepted responsibility."

Other penalties imposed included a $10,000 fine to the athletic department, restrictions on recruiting procedures for Muschamp and his staff, a restriction on text and phone messages to prospects for a two-week period last month and ending involvement with the high-school sophomore.

First-year University of South Carolina President Robert L. Caslen Jr. said the ex-assistant's conduct was "contrary to our core University values and will not be tolerated at our institution."