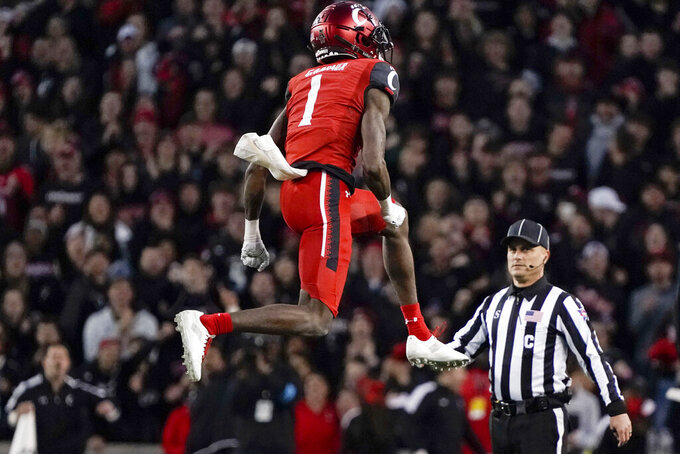 He weighed just 160 pounds, was the No. 163 cornerback prospect in the 247Sports Composite rankings and No. 11 overall in the Bearcats' 14-man recruiting class. Coach Luke Fickell figured it would take a couple years for him to start contributing.

Gardner goes into the College Football Playoff semifinal against Alabama on Friday as one of the most feared corners in the nation. If the junior from Detroit decides to declare for the 2022 NFL draft, analysts have him pegged to become the first Cincinnati player taken in the first round since 1971.

Since he emerged as that scrawny freshman, he's packed 40 more pounds onto his 6-foot-3 frame and along with Coby Bryant forms the best cornerback tandem in the Bowl Subdivision.

The matchup of All-Americans in Gardner and Crimson Tide receiver Jameson Williams is one of the most anticipated in the Cotton Bowl in Arlington, Texas. Throwing to Williams will be Heisman Trophy winner Bryce Young, who also must contend with the Jim Thorpe Award winner in Bryant.

“They have two very strong corners on the outside,” Young said. “It’s something that ... pops when you turn the film on. Those guys have been really consistent all year, which is hard at a position like that. Those guys are ball hogs, they always have an eye for the football, always around the ball.”

Gardner hasn't been around the ball as much as Bryant. That's because quarterbacks try to avoid throwing Gardner's way.

In his 448 snaps in coverage, the receiver he's assigned has been targeted only 36 times, according to Pro Football Focus. Gardner has allowed just 17 receptions in 13 games, none having gone for more than 17 yards and none inside the Bearcats' 20-yard line.

Most remarkable: He's never given up a touchdown in 1,090 career snaps in coverage.

With Gardner all but shutting down his side of the field, he was able to record three sacks in blitzing situations and Bryant was put in position to put up impressive numbers.

Bryant's man was targeted 70 times, according to PFF, and he intercepted three passes and broke up 11. His 14 passes defended ranked ninth nationally.

“It is sort of amazing they are the dynamic duo, and they feed off each other so much, because when you look out there on the football field they’re 53 1/3 yards apart,” Cincinnati defensive coordinator Mike Tressel said. “One’s on one sideline and one’s on the other. Both great football players, both great football IQ, but they really balance each other out in terms of personality.”

Bryant is all business all the time, Tressel said, while the more laid-back Gardner keeps his defensive teammates loose.

“From day one, I took him under my wing as my little brother,” said Bryant, a fifth-year senior. “Just to watch his growth from day one up until now is impeccable. I actually just complimented him on that not too long ago. Just to see his body change and him getting faster, stronger, bigger has definitely been fun to be a part of.”

Gardner has been known as “Sauce” since he was about 6 years old. His little league football coach gave him the nickname — actually it was shortened from “A1 Sauce Sweet Feet Gardner” — and it stuck.

“I’m mostly called ‘Sauce’ by my teammates, some of my coaches,” he said. “Coach Fickell, he still calls me Ahmad, which is fine. I don’t mind being called my government name.”

Gardner excelled as a receiver and cornerback in high school and was a consensus three-star recruit who was pursued mostly by Group of Five schools.

When he showed up at Cincinnati, he put his head down and worked, learned and kept his mouth shut. His breakthrough came in his fifth game his freshman year, when he returned an interception for the go-ahead touchdown in an upset of Central Florida, and he became a starter in the ninth game.

“I surprised everyone,” Gardner said. “I didn’t think I was going to be able to just get on the field like that. I was so small. I think they had plans of redshirting me. I was just out there playing, just listening to the older guys. The corner group started trusting me, and that helped the coaches believe in me. That’s why I was able to make plays early on as a freshman and ultimately be where I am today.”