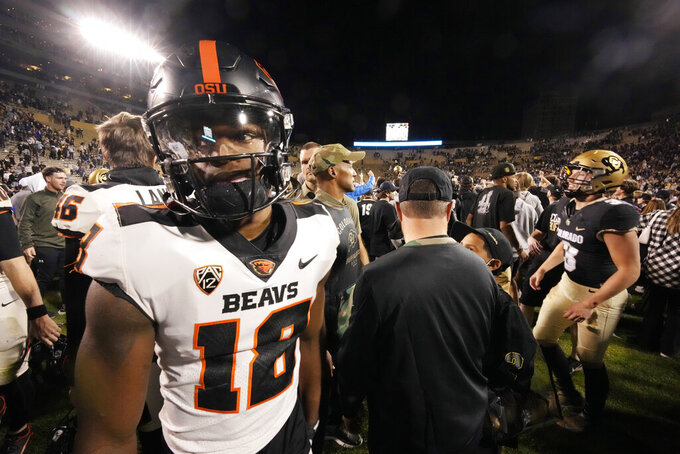 Stanford hasn't won since its 31-24 overtime upset of Oregon on Oct. 2. Last weekend was especially rough on the Cardinal, who fell 52-7 at home to Utah. The loss to the Utes was Stanford's worst since a 57-7 loss to Notre Dame in 2003.

“I’m not going to say this is anything other than what it is, which is it’s a tough stretch. Tough four weeks in a row here," Shaw said. "What I know, being around this game my entire life, sometimes you just got to put your foot in the sand, try to stop the momentum going the wrong way, and get going back the positive way.”

Stanford (3-6, 2-5 Pac-12) gets a chance to get back on track Saturday at Oregon State (5-4, 3-3). It's the last road trip of the season for the Cardinal, who host California in the Big Game next week and wrap up the season against Notre Dame.

The Cardinal were without starting quarterback Tanner McKee against the Utes, and he's questionable again against the Beavers. Shaw said freshman Ari Patu will start if McKee can't go.

Just like the Cardinal spoiled the Ducks' chances at a perfect season, they can play spoiler again with Oregon State needing just one more win for its first bowl berth since 2013.

The Beavers have also trended downward, with losses in the past two weeks on the road to otherwise struggling teams, California and Colorado.

“There was some real disappointment after the game, but we’ve got great leaders who know they have to play better to win," Beavers coach Jonathan Smith said. "We’ve also got to coach better to win and we’re anxious to get back to it this weekend. I know our guys are fired up to play better on Saturday.”

“Making personnel changes is not easy. And it’s something I don’t take lightly. But ultimately, I believe this is the right decision for our football team at this time," Smith said.

Oregon State receiver Trevon Bradford is still sore from a hard fall during the second-half of the loss to Colorado, and the Beavers will wait out the week to see if he's ready to go against Stanford. Defensive end Sione Lolohea is also a question mark. Left guard Jake Levengood is doubtful with an ankle injury.

Patu, Stanford's potential starter against the Beavers, is a 6-foot-5 freshman. He missed his junior year in high school because of a foot injury and enrolled at Stanford early so he missed his delayed senior season at Folsom (California) High School.

Shaw said Stanford will run its usual offense regardless of the QB, but the coaches wouldn't take Patu out of his comfort zone. And obviously McKee could still start.

“We always believed that (Patu) has the chance to be a pretty special football player and this week may be his opportunity,” Shaw said.

Seniors Jack West and Isaiah Sanders started against the Utes.

One hopeful sign for the Cardinal: They have an 11-game wining streak over the Beavers. Shaw is 10-0 against Oregon State as Stanford's head coach.

Also, in a weird scheduling quirk, this is the third straight season Stanford has been on the road against the Beavers. Stanford's Jet Toner made game-winning field goals in each of the last two meetings.

“We’re pulling together to try to get the best out of this group and get back in the win column," Shaw said. "It starts with momentum, because I truly believe when this team feels some momentum and can really get back to the way we were playing earlier in the year, we could have some fun these these last three weeks of the regular season."