Sugar Bowl matches No. 6 Baylor vs. No. 8 Mississippi 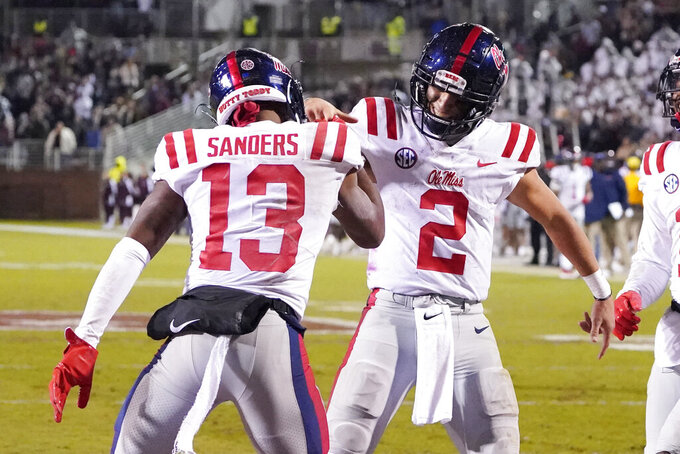 NEW ORLEANS (AP) — Big 12 champion Baylor and No. 8 Mississippi, which finished second behind Alabama in the SEC West, will conclude their seasons against one another in the Sugar Bowl on New Year's Day.

“It's a good contrast in styles," Baylor coach Dave Aranda, who oversees the Bears’ defense, said of Ole Miss and its offensive-minded coach, Lane Kiffin. "We're obviously looking forward to that challenge,”

No. 6 Baylor (11-2, 7-2 Big 12, CFP No. 7) on Saturday held off Oklahoma State, literally by inches, for a 21-16 victory when Bears safety Jairon McVea knocked Dezmon Jackson out of bounds just short of reaching the pylon with 24 seconds on a fourth-down play in the final minute.

Ole Miss (10-2, 6-2, CFP No. 9) concluded its regular season with a 31-21 victory over Mississippi State in the Egg Bowl on Thanksgiving night for its first 10-win regular season in program history. Now Mississippi will return to the Sugar Bowl for the second time in six years after not previously appearing the game since a 27-23 Archie Manning-led victory over No. 3 ranked Arkansas on New Year’s Day, 1970.

“Awesome opportunity to play a great program in Baylor, one that’s extremely well coached,” Kiffin said. “This will be an awesome matchup.”

Baylor is making its third all-time appearance in the Sugar Bowl but also the second time in three seasons. The Bears lost to Georgia 26-14 in what was then-Baylor coach Matt Rhule's last game before he left for the Carolina Panthers of the NFL.

This time, the Bears' opponent features a coach in Kiffin that designed and called an offense that led the SEC in yards per game with 506.7.

“Their ability to make mismatches and create positive plays for them and really negate negative ones, I think, is a big strength," Aranda said.

While top college upperclassmen sometimes opt out of bowl games to prepare for the NFL, Mississippi quarterback Matt Corral said recently that he intended to close out his career in the Rebels' bowl game.

Corral, a dual-threat QB who seems to embrace contact while running the ball and sometimes flattens defenders, had 3,339 yards and 20 TDs passing to go with 596 yards and 11 TDs rushing this season.

“He's a special kid,” Kiffin said, recalling how he “almost got emotional” watching Corral celebrate with band and fans after the Egg Bowl.

“Had to remind myself, got one more with him,” Kiffin recalled. “He’s just such a great leader and such a great kid. Just really proud of him — and glad to be his coach.”

“Both teams have excelled behind the leadership of second-year coaches, who have lifted their programs to great heights," Hundley said, referring to Mississippi's Lane Kiffin and Baylor's Dave Aranda. “We’ve had each of these teams in recent years and know first-hand about the passion of their outstanding fan bases.”

This will just be the second all-time meeting between Baylor and Ole Miss, who last faced each other on September 6, 1975, when the Bears beat the visiting Rebels, 20-10.