Takeaways: In abnormal season, business as usual for Tide 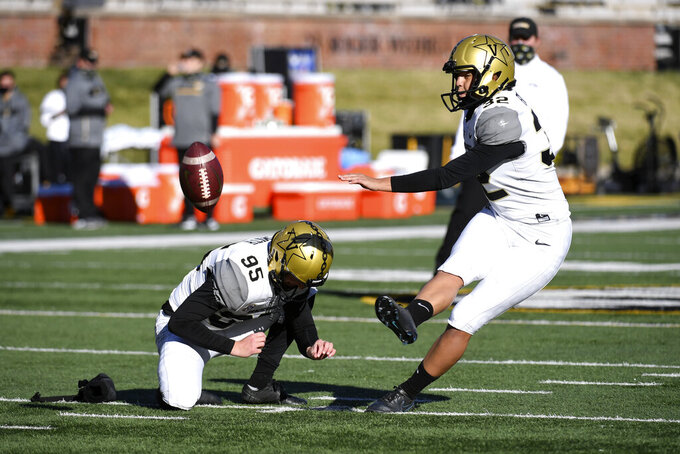 Amid all the uncertainty, disruptions, consternation and anxiety of the 2020 college football season, No. 1 Alabama's excellence has been business as usual.

In yet another rout, the Crimson Tide took all the drama out of Saturday's Iron Bowl: Alabama 42, No. 22 Auburn 13.

Mac Jones threw five touchdown passes, including his usual gorgeous deep balls to DeVonta Smith. Najee Harris dashed around and over tacklers. The Tide's offense continues to be nearly unstoppable.

The major development over the last month and a half has been on the defensive side. A unit that looked confused and porous in an early 63-48 victory at Mississippi is seemingly figuring things out.

After trailing Georgia 24-21 at halftime on Oct. 17, Alabama has outscored five opponents 215-33. Nobody has scored more than 17 in a game against the Crimson Tide.

Talent and athleticism is never the issue in Tuscaloosa. It was probably just a matter of time before new starters such as defensive backs Daniel Wright and Malachi Moore and linebackers Christian Harris and Christopher Allen rounded into form.

After holding Auburn to 4.3 yards per play, the Tide have held four straight opponents under 5.0. Now, they haven't been the most dynamic offenses (Tennessee, Mississippi State, Kentucky and Auburn), but if anyone thought Alabama's defense would be a liability, that's just not the case.

Coach Nick Saban watched this Iron Bowl from his home after testing positive for COVID-19 for the second time this year. The first time turned out to be a false positive. This one kept the six-time national championship-winning coach away from his team and it hardly matter.

“I sat here and felt a little helpless," Saban told reporters. “But I could see things and yell at things and listen to (wife) Miss Terry cheer downstairs. It’s a little different, but it still feels good to win.”

Saban's positive tests have been the only virus drama around the Tide this season. Nobody is about to celebrate that before the reaching the finish line.

There is only so much any program can do to keep out COVID-19. As Ohio State learned this week, you can do a great job right up until the point when you don't.

Conventional wisdom has been that Alabama, Clemson and Ohio State were in a tier to themselves this season.

Then COVID-19 sidelined Trevor Lawrence and Clemson lost to Notre Dame. With Lawrence playing for the first time in more than a month, Clemson beat Pittsburgh like it was Florida State.

Ohio State has had its own defensive issues, but everything is secondary now to just getting on the field for the Buckeyes.

Both Clemson and Ohio State — and maybe even No. 2 Notre Dame or No. 6 Florida — might still prove to be a match for Alabama in the College Football Playoff or SEC championship game.

But for now, Alabama again appears to be in a class by itself, one of the few signs of normalcy in a totally abnormal season.

Becoming a trailblazer can be difficult when you're relying on Vanderbilt's offense.

Soccer goalkeeper-turned-kicker Sarah Fuller managed to get in the game for the Commodores only to kick off to start the second half against Missouri, but that one play was historic.

Fuller is the first woman to play in a Power Five football game. She did it six days after starting for Vanderbilt in its Southeastern Conference championship-winning soccer match.

So, no, that kickoff didn't faze her.

“Honestly the SEC championship game was more stressful,” she told the SEC Network.

The Commodores might have their specialists back from COVID-19 absences by next week, but it would be cool if Vandy keeps Fuller around and — if the appropriate situation presents itself — gives her a chance to score.

You see, the Golden Flashes came into a matchup of unbeaten Mid-American Conference teams having scored more than 60 points in consecutive games and with the top-ranked offense in the country, averaging 616 yards per game.

Seeing all those gaudy numbers Kent State was putting up got Patterson fired up to show where the MAC's best offense really resides.

Patterson has scored more touchdowns in four games (16) than Nebraska has (11) in five.

Coach Lance Leipold has done a remarkable job turning Buffalo into one of the MAC's top programs. This might be Leipold's best team, but in an abbreviated season the Bulls probably won't get a chance to show what they can do on a bigger stage.

“We made a statement,” Patterson said. “Not just in the MAC but the whole country that the Buffalo Bulls can play football. That we have a top-tier G5 team.”

AROUND THE COUNTRY: Texas is in good position to finish out the season with two consecutive road wins (at Kansas State and Kansas) to get to 7-3 in Tom Herman's fourth season. On paper that can be sold as progress, but it is hard to watch the Longhorns and come away thinking, “That is a program headed in the right direction.” ... When the upset of the day in college football is Michigan State knocking off No. 11 Northwestern, it's a very strange season ... One of the obstacles Florida quarterback Kyle Trask must overcome to win the Heisman Trophy is that he is so clearly not the best player on the Gators' offense. That's tight end Kyle Pitts, who scored three TDs against Kentucky. ... On the field, Penn State looks like a team having a tough year while Michigan looks like a program heading in the wrong direction. Maybe something else is going on. A little more than two weeks before the early signing period, Michigan has the ninth-rated recruiting class for 2021, according to 247 Sports. Penn State's class is 24th, right between Iowa and Mississippi State. ... Syracuse's terrible year hit a new low. The Orange spiked the ball on fourth down when they had a chance to run at least one more play in the closing seconds against North Carolina State. Or maybe it was a new high for comedy. ... We can all stop talking about the Pac-12 and the playoff and simply enjoy what's turning into an interesting season. The highlights Saturday: Washington linebacker Zion Tupuola-Fetui terrorizing Utah in a big comeback for the Huskies and UCLA improving to 2-2 with a career game from underrated running back Demetric Felton against Arizona.