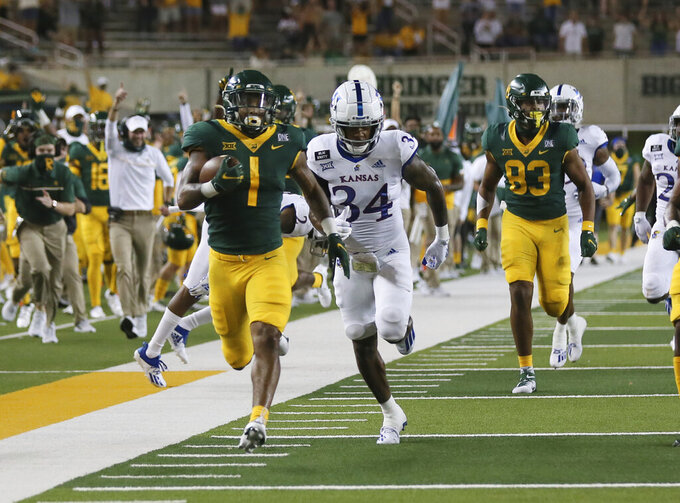 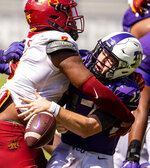 Some things to watch in the second weekend of Big 12 play Saturday, when all five games have a team that won its conference opener playing a team that lost its league opener:

TCU at No. 9 Texas: The Horned Frogs won only six of their last 39 meetings against Texas when they were still together in the old Southwest Conference through the 1995 season. Coach Gary Patterson and TCU have matched that win total in eight games since joining the Longhorns in the Big 12 less than a decade ago. Texas senior quarterback Sam Ehlinger has 688 yards passing for 10 touchdowns with one interception this season. He had 321 yards and two TDs against TCU last season, but also had the only four-interception game of his career. As a true freshman last October, Max Duggan threw for 273 yards with two touchdowns and ran for 72 yards and another score in the Frogs' 37-27 win. He threw for 241 yards against Iowa State in his only half of action last week.

JaQuan Bailey and the Iowa State defensive front vs. Oklahoma's offensive line, with all five returning starters. The 6-foot-2, 261-pound Bailey, who was limited to four games last season because of a leg injury, had 3 1/2 of Iowa State's six sacks against TCU last week. The senior end didn't play last season against the Sooners, whose two top tackles are both at least 6-5 and 326 pounds.

Kansas State is the only team that has ever won a Big 12 game when having only 10 first downs. The Wildcats did that last week when upsetting Oklahoma for the second year in a row. ... No. 18 Oklahoma hasn’t lost back-to-back games in the regular season since October 1999, the nation’s longest such streak. The second-longest is Alabama’s that dates to 2007. ... Texas Tech has averaged 43 points and 382 yards passing in the 12 games quarterback Alan Bowman has played in his career. In the 13 games the third-year sophomore has missed because of injury, the Red Raiders have only 27 points a game.

LONG SHOT Kansas is a three-touchdown underdog at home against No. 17 Oklahoma State, which really hasn't gotten on track offensively since sophomore quarterback Spencer Sanders hurt his ankle in the season opener. Sanders could be back this week for the Cowboys, who have won 10 in a row in the series, by an average margin of 27 points.

Baylor running back Trestan Ebner is the only player in the 25 seasons of Big 12 history to score three different types of touchdowns in a game. He had four TDs against Kansas last week, returning a kickoff and a free kick after a safety for TDs, along with a 1-yard TD run and an 18-yard scoring catch.