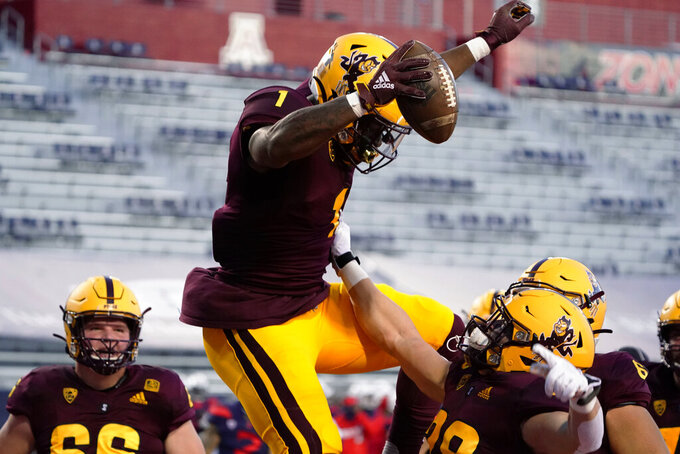 Arizona State running back DeaMonte Trayanum (1) celebrates with Case Hatch after scoring a touchdown against Arizona during the first half of an NCAA college football game Friday, Dec. 11, 2020, in Tucson, Ariz. (AP Photo/Rick Scuteri)

TUCSON, Ariz. (AP) — Arizona State scored on the opening kickoff and had a 14-point lead in the opening minute. Turnovers came by the bunches and so did the touchdowns.

By the time they were done, the Sun Devils had scored the most points in Territorial Cup history and possibly cost their biggest rival's coach his job.

“I’ve never been part of a game like that in my life,” Arizona State co-defensive coordinator Marvin Lewis said.

Arizona State (1-2) made a mockery of the annual Territorial Cup game from the opening kick return, capitalizing on a string of Arizona turnovers to build a 35-0 lead by early in the second quarter.

Freshman DeaMonte Trayanum converted an Arizona fumble on its first drive into a 4-yard TD run 43 seconds after Taylor's TD return and the Sun Devils piled on one score after another.

Rachaad White ran for 133 yards and three touchdowns, Jayden Daniels accounted for three scores and Arizona State won its fourth straight in the series for the first time since 1975-78. It was also the Sun Devils' first win since the 2019 Sun Bowl.

“There is no playbook for it,” Arizona State coach Herm Edwards said. “I was just happy to see these guys win a football game.”

The Wildcats (0-5) may have been thankful there were no fans in the stands after a lackluster performance that may put coach Kevin Sumlin's job in jeopardy.

Arizona was on its heels after Taylor's opening kick return and had three fumbles, an interception and twice turned it over on downs in its first six drives. The Wildcats had seven turnovers overall and gave up 70 points for the first time since 1949 to lose their record 12th straight game spanning two seasons.

Arizona had its opener canceled due to the coronavirus and lost its first four games, most recently 24-13 to Colorado last weekend.

The odd, twisting season came to a conclusion in the desert with the most unique game in the history of a series that dates to 1899.

The Sun Devils quickly turned it into a laugher.

Taylor was about six yards deep when he returned the opening kickoff for a touchdown — Lewis said “What is he doing” in the headset — and Arizona State got the ball back at Arizona's 4-yard line after Gary Brightwell lost the first of his three fumbles. Trayanum scored on the next play to put the Sun Devils up 14-0 in less than a minute.

Daniels pinballed off defenders for a 20-yard TD run and hit a wide-open Ricky Pearsall on a 31-yard score, White broke off a 93-yard TD run and Daniyel Ngata scored on a 3-yard run.

Arizona State led 42-7 at halftime — most first-half points in Territorial Cup history — despite being outgained 260-241 in total yards.

“We were ready to play. We were prepared,” Arizona tight end Bryce Wolma said. “Not much to say. It's embarrassing.”

Arizona was not ready for this rivalry game and it may cost Sumlin his job.

Arizona State, may have have lost two heartbreaking games and dealt with COVID-19 issues, but has taken control of the Territorial Cup after scoring its most points in the series.

The game had long been out of reach when ASU's Jackson He scored on a 1-yard run in the fourth quarter.

Arizona State’s players acted as if he had just scored the winning touchdown.

A walk-on, He is believed to be the only Chinese-born player in FBS and the Sun Devils have celebrated his heritage by putting his name in Chinese on the back of his jersey.

He entered in the fourth quarter and, after White stepped out at the 1 to give his teammate a chance to score, bulled through a defender into the end zone for the first touchdown by a Chinese-born player in FBS history.

He pointed to the back of his jersey and was mobbed by teammates after the score. The support continued with tweets from around the world, long after the game.

“I've already received a lot of messages,” said He, who picked Jackson as his American name because he's a Michael Jackson fan. “I strongly feel their love for this game and for me. I'm so grateful.”

Arizona State has one of the nation's youngest teams this season and should get nearly everyone back next year, including Daniels.

Arizona is looking to add a game next week and must decide the fate of Sumlin. He is 9-20 and has not beaten Arizona State in three seasons in the desert, but also has a large buyout.