UCF is next as No. 3 Cincinnati tries to stay among elite 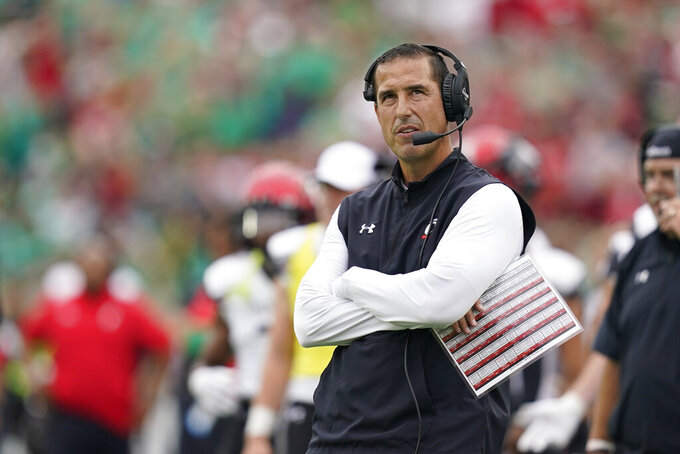 CINCINNATI (AP) — Cincinnati moved up to the No. 3 spot in the AP Top 25 this week, the highest ranking in school history. The challenge now will be staying there without another chance for a marquee win.

The Bearcats (5-0, 1-0 AAC) are trying to become the first team outside the Power Five conferences to break into the College Football Playoff. But a lot of things could happen in the next seven weeks, most of them out of Cincinnati's control.

With quality wins over Indiana and Notre Dame, the Bearcats get into their less formidable American Athletic Conference schedule and don't play a team that is currently ranked until No. 23 SMU on Nov. 20. Cincinnati will likely need big scores to keep getting attention and poll points, with Oklahoma, Alabama and Ohio State lined up behind them.

The slate starts Saturday against Gus Malzahn-led Central Florida (3-3, 1-1), a team that's given the Bearcats fits the past couple of years. Cincinnati has slipped by the Knights by just three points in each of their last two meetings.

Talent-wise, the Bearcats' window to make a run at a national title is still wide open. They've got an experienced, exciting dual-threat quarterback in senior Desmond Ridder, a hot running back in junior Jerome Ford and one of the top defenses in the country.

“You turn this film on, they’ll wake you up in a hurry when you watch them,” said Malzahn, the first-year Knights coach who won a national championship at Auburn in 2013.

The No. 3 ranking is the highest for Cincinnati since it reached No. 4 twice during the 2009 season. One of coach Luke Fickell's concerns is keeping the players focused on playing football amid the extra attention they're getting from all over this week.

“The recognition that they deserve and they’re getting is awesome,” Fickell said. “It’s something we’ve had in the past couple couple of years but, you know, nothing quite like this. It’s a time for us to grow maturity-wise and be able to handle it.”

Fickell, a former Ohio State player and assistant coach, insisted he ignores the polls and hype, but he knows the players don't.

“I do want to make sure that’s a part of the program that we’ve got to be aware of,” he said of the national profile that helps in recruiting. “Hopefully, it’s doesn’t affect (players) in any negative way, but there should be some good buzz to them about what it is they’re doing.”

As a four-year starter, Ridder won't see much he hasn't seen before. He has 1,304 yards and 12 touchdowns with a 65.5% completion rate through five games this season. He's piled up more then 8,200 passing yards with 69 TDs in his career. Part of his role as a leader, he said, involves trying to impress upon his teammates the magnitude of the opportunity.

“Just putting that mindset in everyone that this is a blessing that we get to do this — so why not do it as hard as we can?” Ridder said. “I think that’s one thing I try to push the team to go out every day and do.”

Freshman Mikey Keene has been running the Knights' offense since Hawaii transfer Dillon Gabriel was lost for the season with a broken clavicle last month. Keene got his second start last week and threw for 194 yards in UCF's 20-16 win over East Carolina.

“It was his second game, first home game, and for a young quarterback a lot of times there's more pressure at home than there is on the road," Malzahn said. "So I was really excited at how he handled himself. Overall, I think he had a good, solid performance.”