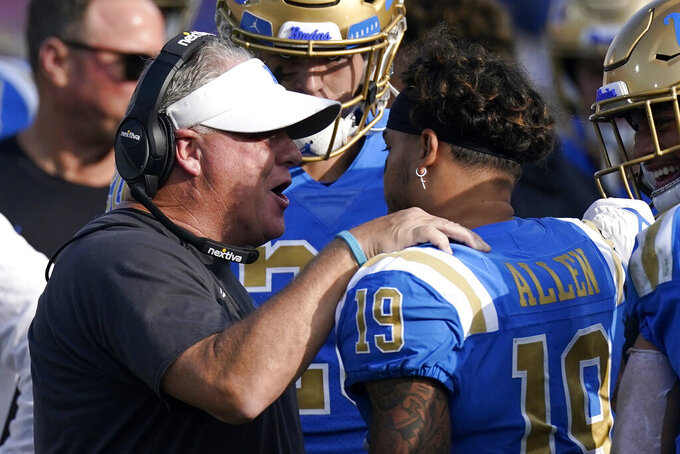 LOS ANGELES (AP) — UCLA is bowl eligible and has secured its first winning season since 2016.

The Bruins have one more goal going into their regular-season finale against California on Saturday night at the Rose Bowl — not having a letdown after a huge win over Southern California.

The Bruins (7-4, 5-3 Pac-12) have dropped six of their last seven the week after facing the Trojans, including all three under Chip Kelly. With a chance to get to eight wins and secure a better bowl spot, Kelly is hoping his team still has plenty of motivation after a 62-33 victory over the Trojans last Saturday.

“There has been no lull. They’ve got the same energy and juice,” Kelly said. “They’re hyped up for every game this year.”

Cal (4-6, 3-4) also comes in off a huge rivalry game victory after keeping its bowl hopes alive with a 41-11 win at Stanford. The Golden Bears have won three of their last four after a 1-5 start to the season.

Coach Justin Wilcox said the focus has been more on how his team has turned its season around rather than their bowl hopes.

“It speaks to the players that we have here and how they approach things and staff as well, locking arms and staying together,” he said. “No one ever wavered. They recognized early in the year we weren’t far off. We were just a play away a few times.”

Both sides have had more time to prepare for this year's game. They weren't slated to face each other last year when the Pac-12 had a shortened season due to the COVID-19 pandemic, but then ended up playing on 48 hours notice on Nov. 15 after the Bruins and Golden Bears original opponents could not play after multiple positive tests. UCLA won that game 34-10.

TOP OF THE CHARTS

Thompson-Robinson is making his fourth career start against Cal. His first win with the Bruins was against the Golden Bears in 2018.

“He’s a very talented player. He can run it, he can throw it, he buys time and can extend the play. He’s done it for a long time and has a lot of experience,” Wilcox said of Thompson-Robinson.

Garbers is trying to become the first Golden Bear since Davis Webb in 2016 to lead the conference in total offense. Thompson-Robinson is coming off the fifth 300-yard game of his career and accounted for six touchdowns (four passing, two rushing) last week against USC.

Thompson-Robinson hasn't said whether Saturday will be his last home game with the Bruins. He has the option to come back for one more season after the NCAA granted an extra year of eligibility to athletes last year due to COVID-19.

“We know that there’s gonna be some decisions that have to be made. We’re just gonna go out there and live it up like it’s our last one, even if it may not be,” he said.

UCLA is 7-0 this season when it rushes for over 200 yards. Zach Charbonnet has six 100-yard games this season. The junior is second in rushing in the conference, averaging 93.7 yards per game.

Cal leads the conference in rush defense, allowing only 122 yards per game. It yielded only 43 yards last week against Stanford.

“The defense has grown week by week. It’s a tribute to (coordinator) Pete (Sirmon) and the defensive staff, tweaking some things but also making some changes that were necessary,” Wilcox said.

After defeating Colorado and USC, UCLA is looking to win all of its November games for the first time since 1998.

Clark's 20.8 yards per reception leads the conference and is seventh nationally. Crawford has 13 receptions of 15 yards or more while Hunter is averaging 18.5 yards per catch, which is third in the Pac-12.