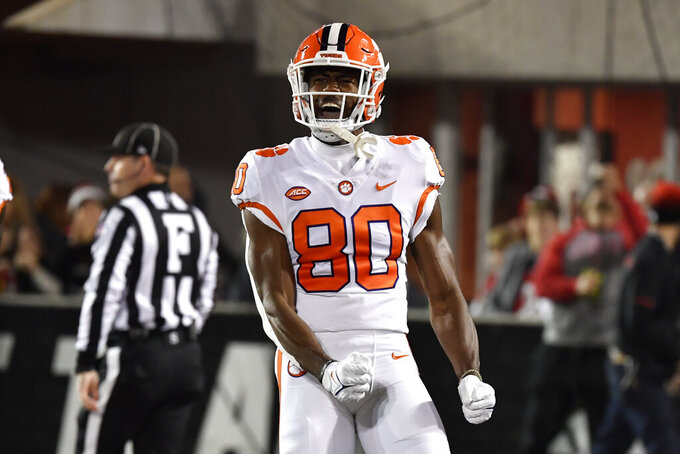 LOUISVILLE, Ky. (AP) — D.J. Uiagalelei picked a good night to have his best game of the season on Saturday, and Clemson’s sophomore quarterback wasn’t going to let a knee injury ruin it – or the Tigers’ chances for a victory.

Uiagalelei’s 8-yard touchdown run with 4:12 left in the game propelled the Tigers to a 30-24 victory over Louisville.

The sophomore quarterback also completed 18 of 30 passes for a season-high 220 yards and two scores in what was a war of attrition between the two schools. Both starting quarterbacks missed time during the game due to injuries. Uiagalelei apparently sprained a posterior cruciate ligament in his right knee that forced him to miss time in the second quarter. But he returned for the Tigers final series of the first half, which ended with an 8-yard touchdown pass to Davis Allen and tied the game at 17.

Injuries also struck Will Shipley and Kobe Pace, who entered the game as the top two rushers for the Tigers (6-3. 5-2 Atlantic Coast Conference). Pace left in the first quarter after entering the concussion protocol, while Shipley eventually returned.

Clemson also overcame a goal-line stand by Louisville’s defense in the third quarter. However, the Tigers took the lead for the first time — and for good — on a nine-play, 57-yard drive midway through the fourth quarter.

As the team is positioning for a strong end to a season that won’t end with a customary spot in the College Football Playoff, Uiagalelei said Saturday was a great way to start the final month of the regular season.

Statistically, the game doesn’t measure up to the performances he had last season against Notre Dame and Boston College as a true freshman filling in for future top draft pick Trevor Lawrence. However, for the second straight week, he led the Tigers to a fourth-quarter comeback victory, and on Saturday posted his best game rating (143.6) by far.

More important to coach Dabo Swinney, the game showed how much the young Tigers team has progressed through the season. In the team’s three losses, the offense failed to capitalize on the chances the defenses gave them. But on Saturday, as the defense played one of its worst games, it was the offense led by Uiagalelei that pulled out the win.

“I think he’s just kind of gotten through the storm he was going through, and man, I’m proud of him,” Swinney said. “It’s a tough position, especially to play at Clemson, and I just love his mental toughness and I love his work ethic. He made some big-time plays tonight, and it’s what we expect from him.”

Louisville was led Malik Cunningham, who ran for 134 yards and two touchdowns on 22 carries. but he went down with an ankle injury with less than five minutes left in the third quarter. The junior quarterback, who also threw for 174 yards on 12-of-20 passing, returned with 10 minutes left in the game.

On their final drive, Cunningham got the Cardinals down to the Clemson 2 in the game’s final minute, thanks to a 45-yard pass to Tyler Harrell and a 19-yard catch by Justin Marshall four plays later. However, on fourth-and-goal, he stumbled on a rollout at the 4 with 10 seconds left to secure the victory.

OUTSCORED, BUT NOT OUTGAINED

Louisville outgained Clemson 397-338, but offensive prowess has not been a good measuring stick for the Cardinals’ success. Saturday marked the team’s ninth loss in the last 14 games in which they’ve outgained an opponent.

Clemson: In what has been an up-and-down year, the Tigers may have earned their gutsiest win of the season. Louisville’s 223 yards rushing was the most the Tigers have given up all season, but despite that and the injuries, they still found a way to escape with a victory.

Louisville: As has been the case for most of the past five weeks, Louisville played well enough to win, but they again faltered down the stretch. In the end, it’s the fourth loss in their last five games. Cunningham’s injury was the key blow as the Cardinals rushing attack was not the same in the final 20 minutes. Before he went down, he ran for 138 yards on 14 rushes.

“The guys are resilient,” Louisville coach Scott Satterfield said. “They just keep battling. At some point. I told them we’re really close at some point we’re going to get over the hump and you are going to start winning these games.”