Virginia joins Pitt, BC in ending season without bowl game 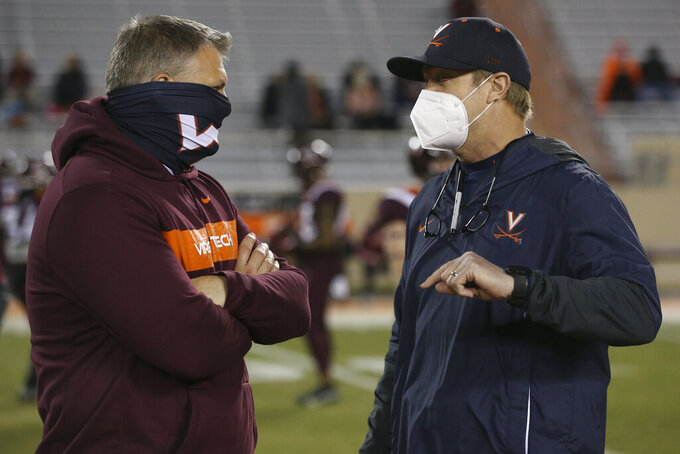 Virginia is not going to a bowl game this season.

A week before bowl announcements are due, on Dec. 20, the Cavaliers announced Sunday that their football season is over and they will not be entertaining an invitation to a postseason game.

Virginia (5-5, 4-5 Atlantic Coast Conference) had its regular season end Saturday in a 33-15 loss at Virginia Tech. Virginia fell short of the ACC’s desire that all schools play 11 games, including 10 in conference, when its game at Florida State was postponed because of COVID-19 concerns on game day. The Cavaliers declined a subsequent rescheduling.

“Unless you live it each and every day, it is impossible to understand the mental, emotional and physical sacrifice these young men have made since their return in July,” Virginia athletic director Carla Williams said. “I am proud of their commitment and their incredible maturity. Our students did everything we asked them to do and they were rewarded with the opportunity to compete in the sport they love when many doubted it could be done. The life lessons gained over the last nine months will serve them well.”

Two other ACC teams — Boston College and Pittsburgh — have also decided against playing in bowls. The NCAA waived bowl eligibility requirements this year because of the coronavirus pandemic.

Virginia coach Bronco Mendenhall, whose team began returning to campus July 5, said he left the decision up to the team.

“I told our team I valued their feedback and I wanted this to be their decision,” he said. “Just as we met at the beginning of the year to make the choice to play, this was their choice to end the season at this time. I think it is appropriate for this team.”

The decision came after team captains met with the rest of the players on Sunday.