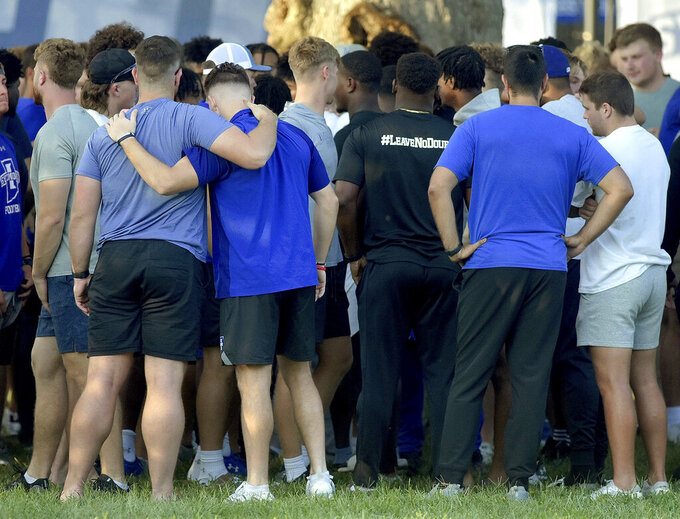 Members of the Indiana State football team console one another after a vigil at Memorial Stadium in Terre Haute, Ind., on Sunday, Aug. 21, 2022, for students, including fellow football players, who were involved in a car crash earlier in the day. (Joseph C. Garza/The Tribune-Star via AP)

TERRE HAUTE, Ind. (AP) — Two freshman members of the Indiana State University football team were among the three students who were killed in a weekend crash, officials said Monday.

Two other football team members who were injured in the crash were out of intensive care but remained hospitalized in serious condition, the university said in a statement.

The single-vehicle crash happened around 1:30 a.m. Sunday when the vehicle went off a state highway and struck a tree in the small town of Riley, about 10 miles (16 kilometers) from the university’s Terre Haute campus. Vigo County Sheriff John Plasse said the vehicle was on fire when deputies arrived and that the driver and two passengers were pronounced dead at the scene.

The sheriff’s department didn't say who was driving or release additional details about the circumstances of the crash.

Those killed were identified as Christian Eubanks, 18, of Waukegan, Illinois; Jayden Musili, 19, of Fort Wayne, Indiana; and Caleb VanHooser, 19, of Liberty Township, Ohio, in the northern Cincinnati suburbs.

Eubanks was a freshman linebacker who went to Warren Township High School, and VanHooser was a freshman defensive back who went to Lakota East. Musili was a sophomore who became an Indiana State student this year and wasn't on the football team, the school said.

Hundreds of students and others gathered Sunday evening outside the university’s football stadium for a vigil in honor of the crash victims.

“It is a terrible day for Indiana State football and a devastating loss for both the Eubanks and the VanHooser families,” football coach Curt Mallory said in a statement. “Both young men were quality individuals who were loved and respected by their teammates and this staff. To say they will be missed is an understatement.”