Addazio eager to lead Colorado State after being fired at BC 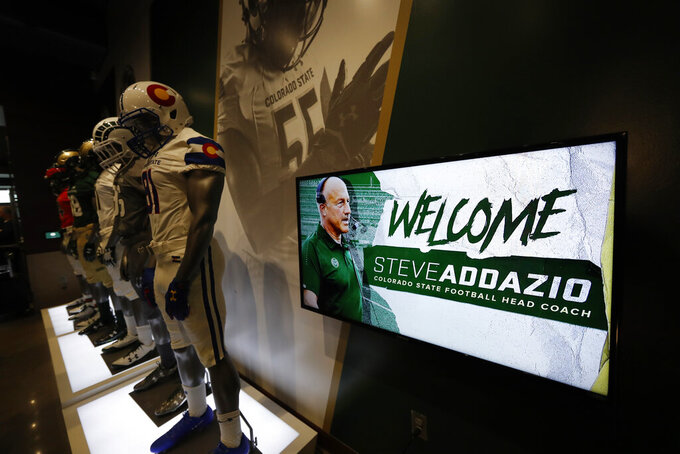 A welcome sign flashes during an announcement that Steve Addazio has been hired as the new head football coach at Colorado State University at a news conference at the school Thursday, Dec. 12, 2019, in Fort Collins, Colo. (AP Photo/David Zalubowski)

The Colorado State football coach wandered from room to room, before taking a moment to gaze out a window at the mountains in the distance.

Back at the summit, now that's where he envisions the Rams.

It's been a whirlwind few weeks for Addazio, who's gone from fired at Boston College on Dec. 1 to hired by the Rams this week. The 23rd head coach of the program touched on all the right topics Thursday in front of a gathering of fans inside the state-of-the-art Canvas Stadium. He preached family, loyalty and the desire to beat rival Wyoming.

Only, he wouldn't say his newest rival's name — referred to the Cowboys as that “team up north.” He's eager to get to work.

His first order of business was meeting with the team. He told them it was his job to earn their respect. The Rams are coming off a second straight losing season.

"He did a wonderful job with the team," said athletic director id director Joe Parker, who hired Addazio a week after parting ways with Mike Bobo. “I saw a lot of smiles. I saw a lot of head nodding. I saw some laughter. I haven't seen that in a while from our team.”

Addazio's fired up about getting a fresh start following his firing by Boston College after seven seasons and a 44-44 record.

"It won't be easy," Addazio said of the Rams' turnaround. “But we're going to do it together and build together and have great pride in that.”

His focus is currently on recruiting. Then, it's deciding on a coaching staff and building relationships.

He's already reached out to longtime Colorado State coach Sonny Lubick, who took the program to lofty heights during his 15-year run. Lubick was actually one of Addazio's first calls after landing the job.

“I let him know I want to build a friendship with him and seek his advice and wisdom,” explained Addazio, who made sure to point out to Rams fans that while at Temple in 2011 the Owls beat Wyoming in a bowl game.

Addazio actually knew quite a bit about Colorado State before even stepping foot on the campus. For that, he thanks Urban Meyer, who was an assistant coach in Fort Collins from 1990-95. Addazio is close with Meyer and referred to him often in his introductory news conference. Addazio was on Meyer's staff at Florida when the Gators won national titles following the 2006 and '08 seasons.

During the hiring process, Parker was spotted with Meyer. Asked about the role Meyer might have played, Parker responded: “When you have someone with that level of football experience, that level of football acumen, connected with the sport of college football ... when you get an opportunity to have conversations around that with a person like that, we welcome it.”

Addazio doesn't have much time to hit the recruiting trail. He's looking for the same sort of attributes in all his players.

"Character, passion for the game, toughness — you get those characteristics and you can develop players," Addazio said.

As for his coaching staff, he doesn't want to make any rush judgments. He's going to take some time.

“It's a puzzle you're putting together,” Addazio said. "And that puzzle is about making it a great fit for here and making sure it's the best staff that is great for Colorado State.”

Addazio made it a priority to be competitive against close rivals. Bobo went 2-13 versus Wyoming, Air Force and Colorado. The Rams open at home against Colorado next season.

“I understand the importance level of those rivalries,” said Addazio, who agreed to a five-year deal with a base salary of $1.5 million in the first year.

“We're going to get that boot and bring it back here,” Addazio said of the trophy that goes to the winner of the “Border War.”

Addazio did clear up one thing: Just why he refers to some people as a “dude.” He even made a video about it a few years back.

"What's a dude? Someone who's great at what they do," Addazio said.

He looked to his side at Parker.