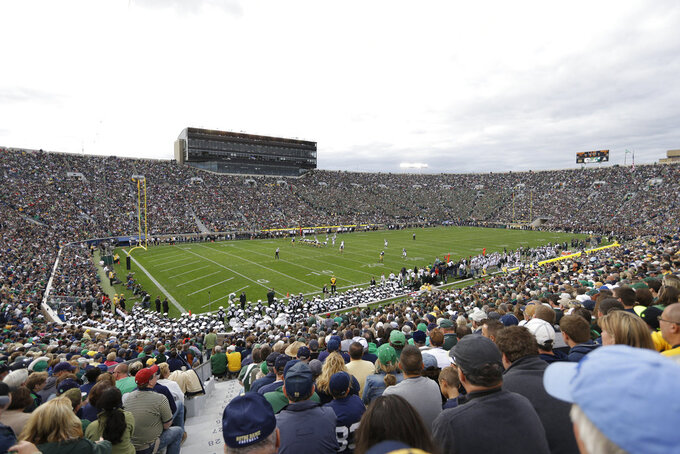 FILE - This is a Sept. 21, 2013, file photo, showing fans during the second half of an NCAA college football game between Notre Dame and Michigan State in South Bend, Ind. No. 14 Michigan plays at No. 12 Notre Dame on Saturday, Sept. 1, 2018. (AP Photo/Michael Conroy, File)

SOUTH BEND, Ind. (AP) — The "end" of the Michigan-Notre Dame rivalry was a three-year soap opera that included accusations of cowardice and the "Chicken Dance" being played in the Big House.
It was quite the drama, concluding in 2014 with a historic beat down. The "end," however, turned out to be just a brief hiatus.
The revival of Michigan-Notre Dame was so matter-of-fact that the athletic directors who got it done weren't quite sure who reached out first. Was it a phone call? No, they ran into each other at a meeting. Right? A call from one coach to the other helped. Maybe.
To the people involved, it seemed inevitable that the Wolverines and Fighting Irish would play again. No peace treaty necessary. No. 14 Michigan faces No. 12 Notre Dame on Saturday.
"It is something that we value, that we believe is valuable for college football," Michigan athletic director Warde Manuel said. "That is valuable for both Michigan and Notre Dame and college football."
Michigan-Notre Dame is a rivalry with more prestige than history. The Fighting Irish played their first game against Michigan in 1887 but did not become semiregular opponents until the late 1970s.
A deal between the schools in 2007 extended the agreement though 2031, but it allowed for either school to pull out with three games' notice.
In 2012, Notre Dame exercised that option. The Fighting Irish had joined the Atlantic Coast Conference, a deal that allowed Notre Dame to keep its football independence but called for five games against ACC opponents each season.
Notre Dame was committed to preserving annual games against Southern California, Stanford and Navy. That basically left Notre Dame with no room for another yearly series.
The drama started when Notre Dame athletic director Jack Swarbrick gave a letter of notification to then-Michigan AD David Brandon before the 2012 game in South Bend.
"The decision to cancel games in 2015-17 was Notre Dame and not ours," Brandon said then in a news release.
What followed were some WWE-style follies. Then Michigan coach Brady Hoke accused Notre Dame of being "chicken" to play the Wolverines. Notre Dame coach Brian Kelly said Michigan was not one of the Irish's traditional rivals.
The crowd at Michigan Stadium in 2013 was frenzied for a night game the Wolverines won 41-30. After it was over, the "Chicken Dance" song blared through the Big House.
"I sort of enjoy the mythology of all that," Swarbrick said. "It's got marketing value."
The Fighting Irish got their revenge the following year in South Bend, beating Michigan 31-0. The Wolverines had gone 365 straight games without being shut out.
The rivalry went dormant but not for long.
The exact details are fuzzy, but in 2016, the ball got rolling.
Kelly said Michigan coach Jim Harbaugh reached out to him about playing again. Kelly was on board. Harbaugh told Manuel the coaches were hoping to get it done.
Manuel and Swarbrick have a relationship that goes back almost two decades, when both were in the Big East. Manuel was Connecticut AD and Notre Dame was a member of that conference.
"I either ran into Jack somewhere or he called me," Manuel said.
Swarbrick did not know about Harbaugh reaching out to Kelly, but he recalled Manuel approaching him at a meeting of athletic directors.
"It's funny, I keep on hearing different versions of it," Swarbrick said. "From my perspective, Warde reached out to me. It took us, like, no time. As soon as we could identify a date to agree to the game."
The one stumbling block was that Michigan had to buy out a series against Arkansas for $2 million to make room on the schedule.
In July 2016, Notre Dame and Michigan announced they would play this season and next.
Manuel said the only complaint he has heard from Michigan fans has been with this season's game being played in South Bend after the last meeting was there. It set up the Wolverines with a brutal road schedule that includes Michigan State and Ohio State.
The problem was that playing at home would have left Michigan with eight games at the Big House this season and only six next year.
"I would have been looking at a $6 million, $7 million hole from not having that extra home game in the budget," said Manuel, a former Michigan football player.
There are no more Michigan-Notre Dame games scheduled after next season, but everyone involved wants to make it work.
"This is something that Jim and I wanted to get on the schedule. Be careful what you wish for," Kelly said. "But I think it's great for college football, we're excited about this matchup, we think it's great for college football. And I know our kids and our coaches can't wait for Saturday night."
___
Follow Ralph D. Russo at www.Twitter.com/ralphDrussoAP and listen at https://www.podcastone.com/AP-Top-25-College-Football-Podcast
___
More AP college football: https://apnews.com/tag/Collegefootball and https://twitter.com/AP_Top25

By Gary B. Graves an hour ago
an hour ago
By The Associated Press 5 hrs ago
16 hrs ago
By Tom Withers 17 hrs ago