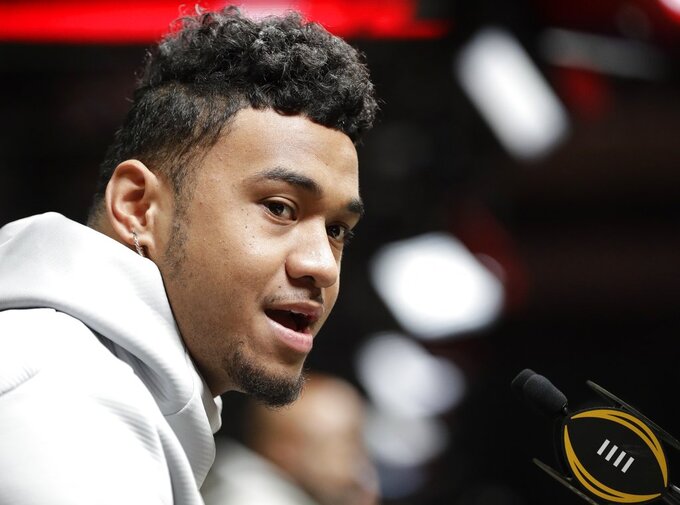 "I can only say we're continuing to get better," Tagovailoa said at media day on Saturday. "It's trying to maintain the feeling of it feeling good. Just one more game then I can rest."

Tagovailoa had surgery on his ankle after he injured it against Georgia in the SEC title game. He has been receiving almost nonstop treatment on his ankle since.

Offensive coordinator Mike Locksley said Tagovailoa, who also dealt with a knee injury this season, was as healthy as he has been in months.

"I thought last week we saw him healthy," Locksley said.

Since the surgery, if Tagovailoa has not been practicing, he has been getting treatment.

"The guy's getting treatment as we're sitting here," Alabama head athletic trainer Jeff Allen said. "He's got an electric stem machine hooked up and he's also got a portable ultrasound machine that helps increase blood flow. He sleeps in a cold compression unit every night to control swelling or any soreness he might get in practice that day. Just having a plan for literally every hour."

There are 211 hours from the end of the Orange Bowl semifinal victory against Oklahoma until the championship game. During that time, Alabama had five two-hour practices.

"We can get 201 hours of treatment. What are we going to do during that time?" Allen said.

Allen said the physical therapy for Tagovailoa, who passed for 318 yards and four touchdowns against Oklahoma, was pretty much done before the Orange Bowl.

Tagovailoa's performance in practice leading into the Oklahoma game, and then how he played, assured the medical staff that the sophomore could function the way he needed to in a game.

"We don't need to focus on that as much now as we need to do pain control, swelling control, because we know from an agility and a functional standpoint, he's ready to go," Allen said.