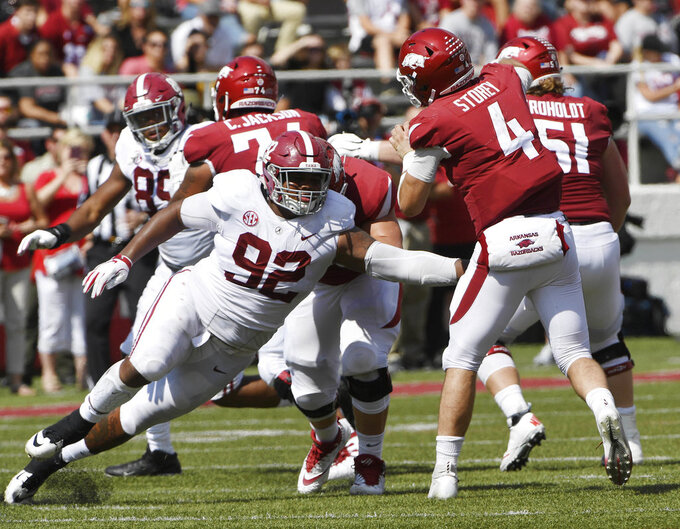 FILE - In this Oct. 6, 2018, file photo, Alabama defensive lineman Quinnen Williams puts the pressure on Arkansas quarterback Ty Storey in the second half of an NCAA college football game, in Fayetteville, Ark. The guys who have to block Quinnen Williams in practice aren't the least bit surprised by his success on Alabama's defensive line. Williams has emerged as a dominant force for the top-ranked Crimson Tide at nose guard, doing in games what he has often done in practice. "I think we're honestly a little relieved as an (offensive) line that we're like, 'OK, no one else can block him either,'" Alabama left tackle Jonah Williams said. (AP Photo/Michael Woods, File)

TUSCALOOSA, Ala. (AP) — The guys who have to block Quinnen Williams in practice aren't the least bit surprised by his success on Alabama's defensive line.

Williams has emerged as a dominant force for the top-ranked Crimson Tide at nose guard, doing in games all season what he had often done in practice.

"I think we're honestly a little relieved as an (offensive) line that we're like, 'OK, no one else can block him either,'" Alabama left tackle Jonah Williams said. He likens it to blocking "a nearly 300-pound bar of soap."

The 6-foot-4, 295-pound Quinnen Williams has deftly moved inside to replace first-round NFL draft pick Da'Ron Payne for the Tide, which visits No. 4 LSU after an open date this weekend. He's a run-stopper who has also shown a knack for harassing opposing quarterbacks and become one of the best players on a defense that had to replace eight draft picks.

He's become the centerpiece of a defensive front that is where it typically starts for 'Bama, even if it no longer relies on the old prototype of a blocker-hogging run-stuffer like massive former All-American Terrence Cody.

"Any time you have really productive guys up front, especially guys that play the run well as well as have pass rush ability, that's a real key to having a good defensive team, because it all starts up front in my opinion," Tide coach Nick Saban said. "Q has certainly developed nicely here and is playing really well this year and has been very productive for us."

Williams moved back outside at times when Davis was suspended for the first half against Tennessee.

He's Alabama's fifth-leading tackler but ranks second with 8.5 tackles behind the line and leads the way with nine quarterback hurries. Williams also sacked Missouri's Drew Lock for a safety and had 3.5 tackles for loss in the opener against Louisville. While Buggs has been one of the SEC's sack leaders, Williams has been able to generate plenty of pressure up the middle.

"Right now, in college football, it's really like quick passes," Williams said. "So it's like the quickest way to an object is a straight line. So if you're in the nose and you go straight to the quarterback, that's the quickest way. That's why I think a lot of coaches love a defensive tackle who can pass rush and also stop the run."

Williams was a second-team midseason Associated Press All-American . Five times, he has been named one of the team's players of the week by coaches.

The price of that on-the-field success quickly showed up in how many blockers he typically had to face on a given play.

"I get double-teamed a lot more than I get single-teamed now that I've been playing good," Williams said.

He is also now getting talked about as a potential NFL first-round pick while employing the tricks learned from Payne and Dalvin Tomlinson.

"He's strong. He plays with good leverage, low center of gravity," Jonah Williams said. "He's really good with his hands. I know that that was one thing that he said he talked to Payne and Dalvin, some of the great D-linemen we've had here and kind of learned about how to work his hands.

"And that's the toughest thing is when you've got an almost 300-pound bar of soap that's pushing past you and you just can't get ahold of him. So, I think that he's really perfected his hand technique."