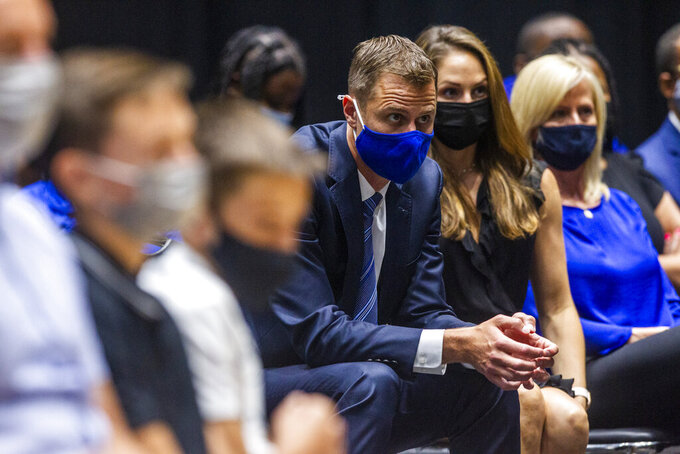 Duke associate head coach Jon Scheyer listens as head basketball coach Mike Krzyzewski speaks during an NCAA college basketball news conference Thursday, June 3, 2021, at Cameron Indoor Stadium in Durham, N.C. Krzyzewski, the winningest coach in the history of Division I men's college basketball announced that next season will be his last with the Blue Devils program he has built into one of college basketball’s bluebloods. The school named former Duke player and associate head coach Jon Scheyer as his successor for the 2022-23 season. (Travis Long/The News & Observer via AP) 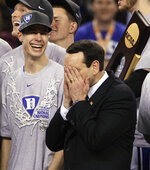 DURHAM, N.C. (AP) — What makes Mike Krzyzewski unquestionably one of the greatest coaches in the history of American sports goes beyond his resume of impressive milestones.

As he prepares for a final season at Duke, the success of the Hall of Famer and winningest coach in Division I history is as much about intangibles as the numbers of wins and championships.

It starts with Krzyzewski's ability to connect with players, whether they be touted college recruits or NBA all-stars competing on a global stage. Every coach strives for that bond, not many achieve it.

“Let’s just put it this way: He has set a very, very high standard,” said Jerry Colangelo, the USA Basketball’s managing director who hired Krzyzewski as the men’s national team coach in 2005. “The bar is very high as Coach K steps down at the end of this season. So it’s going to take an incredible effort, an incredible individual with the ability to have the longevity that Coach K has had through thick and thin.

“That’s not so easy in this game today. So you may not see anyone repeat what he’s accomplished for quite some time.”

His legacy is intact, the numbers speak for themselves: 1,170 victories in 46 seasons going back to his time at Army, five NCAA championships, a record-tying 12 Final Fours, a record 126 weeks with his teams ranked at No. 1 in The Associated Press men’s college basketball poll.

Krzyzewski's title count is second only to John Wooden's 10 at UCLA; no other active Division I men's coach even has three following the April retirement of Roy Williams at rival North Carolina. That's enough to put the 74-year-old Krzyzewski alongside Wooden as the top choices on any “Mount Rushmore” discussion of all-time great college coaches.

A case can be made that Coach K has surpassed the Wizard of Westwood because of how he has done it.

Krzyzewski’s wins have kept coming in a more wide-open recruiting landscape than what Wooden faced. Arguably the best parallel to Krzyzewski is Alabama football coach Nick Saban, who has won six titles in 12 years with the Crimson Tide. Like Krzyzewski, Saban has managed to successfully navigate challenges Paul “Bear" Bryant never encountered.

Krzyzewski's career began in the days when top NBA prospects stayed in school — think Virginia's Ralph Sampson and Georgetown's Patrick Ewing becoming No. 1 overall picks after four-year college careers. That has long since given way to players making one-year campus stops before entering the draft or quickly transferring.

His 1991 and 1992 Duke championship teams were led by program mainstays Christian Laettner, Bobby Hurley and Grant Hill. Krzyzewski's 2010 team won with a senior-led roster, featuring his successor in coach-in-waiting Jon Scheyer. By 2015, the Blue Devils had won their recent crown by pivoting to more “one-and-done” talent headed to the NBA after a single season.

“His biggest adjustment was the one-and-done,” retired LSU coach Dale Brown said. “He was critical of it but was intellectual enough to understand that is the system now. He was able to adjust. Some people can’t adjust to a system and he did, and did extremely well.”

Colangelo has seen that up close.

Colangelo began restructuring the men’s national team program in 2005 after it had failed to win a major international competition since 2000. He partnered with Krzyzewski while securing commitments from the NBA’s top players, including names like the late Kobe Bryant, LeBron James, Carmelo Anthony, Dwyane Wade and Chris Paul.

The result: Krzyzewski managed egos and meshed star talent into cohesive teams that returned the U.S. to its global perch, winning Olympic gold in Beijing in 2008, London in 2012 and Rio de Janiero in 2016.

“One of the things that I knew going in is they all respected him,” Colangelo said. “They all knew him. He had a lot of contact with a number of the players over the years through whatever it was — camps, speaking sessions. ... But there was an incredible respect, mutual respect.

“The other thing is he's such a great communicator. I'm very sensitive to that because in my 50 years in pro basketball and spending my whole life in the game, if you're not a good communicator, it'll only take you so far. I mean, he hasn't lost his touch a bit through all these years.”

Krzyzewski gave a little insight to his approach during a news conference Thursday.

“It's up to me: How am I going to communicate with them?” Krzyzewski said. "And so I learn from them. I've learned current music, current culture, some phrases. I've got to keep my shoe game up. Some of my Nike stuff's got to be a little bit tighter than my body would probably want. ... For me, I adapt to how I communicate, and then how we play.

"But I do not adapt with the values of our program that we teach them. You just have to teach them where they would receive them."

While Krzyzewski isn't interested in discussing his legacy, others are happy to do so. Retiring athletics director Kevin White called him the GOAT — the “Greatest Of All Time” — after a career of “mind-boggling” success.