AP sources: UNC has agreement to bring back Brown as coach 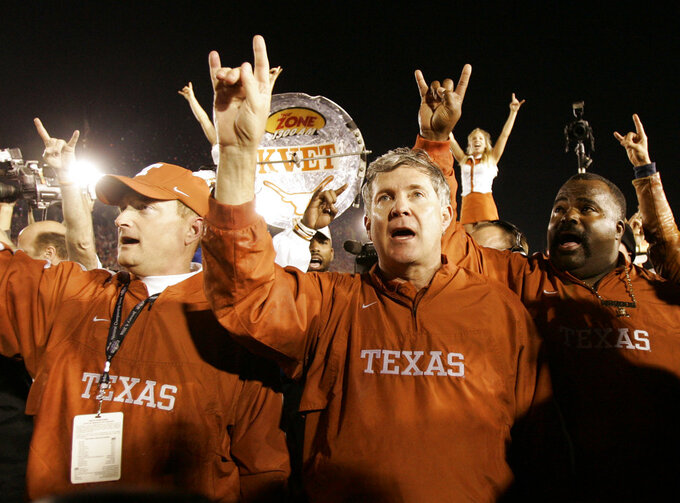 RALEIGH, N.C. (AP) — Mack Brown turned around North Carolina's football program once before, and the Tar Heels believe he could do it again.

The school has reached an agreement in principle with Brown on a deal for him to return to Chapel Hill as its next football coach, a person involved in the negotiations told The Associated Press late Monday night. The person spoke on condition of anonymity because the school hasn't publicly commented on its coaching search. The final step comes Tuesday morning when the agreement goes before the university board of trustees for approval, the person said.

Earlier in the day two people with knowledge of the situation told the AP the school was negotiating with Brown. One of the people said the deal was being finalized.

North Carolina moved quickly to replace Larry Fedora, who was fired on Sunday after seven seasons.

The 67-year-old Brown coached the Tar Heels from 1988-97 before spending 16 seasons at Texas. His last two teams at North Carolina finished ranked in the top 10 nationally.

He later led the Longhorns to the national championship for 2005. He left Texas in 2013 and has been working in broadcasting.

The Tar Heels are in the midst of a deep two-year downturn. Fedora matched a program record with 11 wins and won an Atlantic Coast Conference division championship in 2015, but the Tar Heels have lost 21 of 27 games — including 16 of 18 in the ACC — since November 2016.

Recruiting has also slid along with fan attendance at Kenan Stadium.

So the school is looking for a jolt from someone who offers a connection to one of the most successful sustained runs in program history, which followed an extensive rebuilding effort.

Brown started 1-10 in each of his first two seasons, but steadily built up the program through strong recruiting, particularly with instate prospects. The Tar Heels won 10 games in 1993, then went 10-2 and finished No. 10 in the AP poll in 1996.

His 1997 team finished 11-1 — the only loss coming to Florida State at the peak of the Seminoles' romp through that decade — and No. 6 in the final AP poll.

But by that point, Brown was gone. He left after the regular-season finale against Duke to take over at Texas and missed a 42-3 win against Virginia Tech in the Gator Bowl.

Once at Texas, Brown coached a Heisman Trophy winner in Ricky Williams, then another Heisman finalist — Vince Young — led the Longhorns to a 13-0 season in 2005 that ended with a win against USC in a Rose Bowl classic for the national title.

Texas played for another championship in the 2009 season behind quarterback Colt McCoy, but lost to Alabama to finish 13-1. Brown's final four teams went a combined 30-21 before his exit in 2013.

While Brown would inherit a UNC program in desperate need of a turnaround, there is at least one bit of good news for him: the school has been finishing construction on a new indoor football practice facility with adjoining outdoor fields — a complex that was supposed to open this season but hit delays — as part of a $115 million athletics facility project.