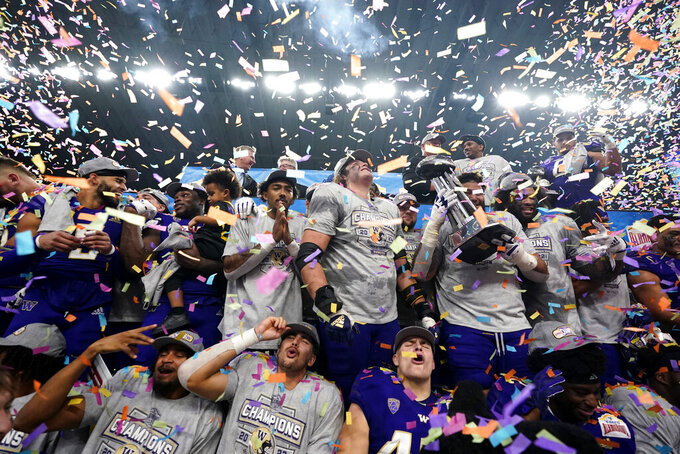 For the second straight year, there was a record number of teams that started the season ranked in the AP Top 25 and finished it unranked.

The final Associated Press college football poll presented by Regions Bank was released early Tuesday and back-to-back champ Georgia was a unanimous No. 1, of course. TCU followed at No. 2, even after a record-setting beatdown at the hands of the Bulldogs in the College Football Playoff national title game Monday night.

Michigan, Ohio State and Alabama rounded out the top five.

Missing from the final rankings were Texas A&M, Oklahoma, Miami and 12 other teams that were in the preseason poll back in August. That 15-team turnover from the first to final poll is one more than there was in the 2021 season, which had been the most in the poll's 86-year history.

Two seasons doesn't necessarily represent a trend, but maybe it's getting harder to project who will be good in any given season.

Maybe it's all the transfers? Maybe it's the super seniors who have taken advantage of the extra season of eligibility the NCAA allowed for those who played in the pandemic? Maybe it's the myriad coaching changes? Maybe it's more freshman arriving ready to contribute?

Whatever the reasons, when looking toward next season for the teams that finished ranked this season, assume that many, if not most, are due for some regression. (Note: Going and staying, in some cases, is subject to change):

Reality check: The Bulldogs started this season ranked third under the assumption there would be a little regression. That won't happen next season. They'll be No. 1.

Reality check: The Horned Frogs are looking at substantial losses in the depth chart. They might not start next season in the top 10.

Reality check: No reason the Wolverines won't start next season around the top five whether Jim Harbaugh's the head coach or not.

Reality check: Breaking in a new quarterback will cost the Buckeyes a few spots in the preseason rankings. Still, might be top five.

Reality check: The Tide's lowest preseason ranking since 2010 is No. 3 in 2015 and 2020. Alabama won national titles those seasons.

Reality check: The Vols' breakout season was fueled by upperclassmen. They will start next season significantly lower than they finished this one.

Reality check: The Nittany Lions, with a load of high-caliber sophomores, will be a trendy pick to win the Big Ten and maybe even a top-five team in the preseason.

Reality check: The Huskies made a huge jump in 2022 and grabbed their first final top 10 ranking since 2016. They will likely start around this same spot next year.

Reality check: It's hard to follow a dream season, but the return of Pratt means the Green Wave could start next season ranked.

Reality check: How Rising's knee injury heals could determine whether the Utes are a preseason top-10 team.

Reality check: The Seminoles turned a corner in the third season under coach Mike Norvell and are bringing just about everybody back in 2023 for what should be a top-10 start.

Reality check: The Heisman Trophy winner returning probably means a preseason top-10ish ranking for the Trojans. That might be a overly optimistic without significant defensive improvement.

Reality check: The Tigers got a benefit-of-the-doubt, top-five preseason ranking this season. They might not even be the highest-ranked ACC team going into 2023.

Reality check: The defending Big 12 champions will earn a preseason ranking, likely in the teens, but beware: Both of the 2021 Big 12 championship game participants (Baylor and Oklahoma State) began 2022 ranked and finished it unranked. It’s a weird conference.

Reality check: The Ducks have been ranked 11, 11, 9 and 11 in the last four preseason polls. They will probably be a little lower than that in 2023.

Reality check: Brian Kelly's first season was a success. There will be real expectations and a preseason ranking for the Tigers in 2023.

Reality check: With the addition of former Clemson QB DJ Uiagalelei, the Beavers should be in line for their first preseason ranking since 2013.

Reality check: First-year coach Jon Sumrall directed one of the best seasons in school history and enough of the roster is returning to warrant consideration for a preseason ranking.

Reality check: A new era begins with coach Zach Arnett taking over for the late Mike Leach. Arnett's first season looks like a rebuilding one that will start unranked.

Reality check: The Bruins will be breaking in a new quarterback — maybe five-star freshman Dante Moore — and the rest of the offense is also inexperienced. Borderline preseason Top 25.

Reality check: Been a nice two-year run for the Panthers, but a major overhaul is coming on defense and another new quarterback in Boston College transfer Phil Jurkovec. Pitt probably starts unranked.

Reality check: The Gamecocks had some huge wins in 2022, but between some early draft entrants and players entering the portal, they don't necessarily look like a lock to enter 2023 ranked.

Reality check: Replacing Haener and other leaders of an effective offense will likely give voters pause about the Bulldogs heading into next season.

Reality check: Barley ranked to finish this season and losing their best player is not a formula for getting ranked in the following preseason.