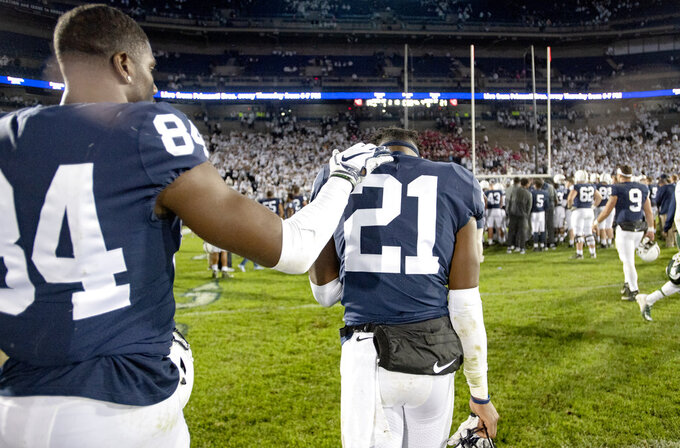 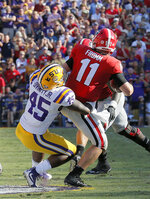 Some Saturdays it just sort of feels as if no one knows anything about college football when all the teams we thought were good don't play that way.

It was one of those days when you could be excused for thinking that everybody's terrible — except No. 1 Alabama .

Four of the top eight teams lost, including two — No. 6 West Virginia and No. 8 Penn State — to unranked teams. The number of unbeatens was down to eight after No. 19 Colorado finished the day by being exposed by USC. Four teams — Washington, Penn State, Wisconsin and Miami — that started the season in the AP top 10 were basically eliminated from the playoff race.

A slew of other highly ranked teams barely avoided big upsets. No. 5 Notre Dame , No. 9 Texas and No. 10 UCF all escaped with narrow victories against unranked teams — the Fighting Irish and Longhorns doing so at home against double-digit underdogs. No. 14 Florida needed to rally from 18 down to beat Vanderbilt and No. 3 Ohio State spent most of the game trying to shake Minnesota .

None of those inspired much confidence, but a win's a win, and on this day that was not to be taken for granted.

The underdogs won two of Saturday's biggest games, though the real surprise was how.

No. 13 LSU blew out No. 2 Georgia for the Tigers' third victory this season against a top-10 team. This was by far LSU's most impressive performance. The Tigers might have even sparked a quarterback controversy in Athens among Georgia fans who had to be wondering why freshman Justin Fields never got a chance to replace the struggling Jake Fromm.

Most damaged by Georgia's dud? The Southeastern Conference's chances of getting two teams in the College Football Playoff again. Unless maybe those two teams are LSU and Alabama. The top-ranked Tide visit the Tigers on Nov. 3, and looking at Alabama's schedule, it might be the only real challenge Nick Saban's team faces in the regular season.

For much of the first month, LSU seemed more of an early season novelty than a legitimate College Football Playoff contender.

The offense is limited in the passing game, but quarterback Joe Burrow is a decent runner and generally avoids mistakes. The running game lacks the star back it has had in recent years, but the offensive line has come together to allow LSU to have the bruising offense it wants. And the defense is nasty, with preseason All-America linebacker Devin White and two of the best defensive backs in the country in cornerback Greedy Williams and safety Grant Delpit.

The Tigers' coach has been looked at as a bit of novelty, too, but Ed Orgeron and offensive coordinator Steve Ensminger worked over Kirby Smart and his staff in Death Valley.

"He knows what he's doing. People just, they hear his accent and they just think, 'Oh, this guy is just all rah-rah,'" tight end Foster Moreau said about Orgeron. "He made all the right decisions tonight."

Must be nice to be worried about getting ONLY one team in the playoff. After what happened at Autzen Stadium on Saturday, the Pac-12 will to struggle to get one.

No. 17 Oregon beat No. 7 Washington in overtime , catching a break when the Huskies missed a short field goal to win it at the end of regulation. Good for the Ducks, bad for the conference. Washington has two losses and the setback to Auburn is not aging well. The Ducks look like the best team in the league, with talented quarterback Justin Herbert working behind a strong line, but that awful loss to Stanford last month means they are not even in the driver's seat to win the North.

Making matters worse, Oregon's nonconference schedule was awful and the selection committee won't care that Texas A&M bailed on a home-and-home series with the Ducks.

Sure there is a path for the Ducks to get in the playoff mix, but the Pac-12 is going to need some of those near upsets to turn into actual upsets in other conferences.

If you buried No. 12 Michigan after the opening loss at Notre Dame, it is time to dust off the Wolverines, who thoroughly dominated Wisconsin .

Even in South Bend, there were glimpses of what quarterback Shea Patterson could do to improve Michigan's offense. Patterson is a playmaker and the offensive line is improving. The defense has never been a question. It is one of the best in the country, shutting down the Badgers even without star defensive Rashan Gary (shoulder).

Michigan State, coming off an oh-so-very-Michigan State-type upset of Penn State , hosts Michigan next weekend and then Penn State comes to the Big House on Nov. 3. The Ohio State game is in Columbus, but considering the Buckeyes' issues in every aspect of the game that does not involve quarterback Dwayne Haskins, it is not a stretch to call Michigan a very viable playoff contender.

AROUND THE COUNTRY: At some point a bigger program, with lots of resources and a stocked trophy case, will lure Iowa State coach Matt Campbell out of Ames, but for now he is making the Cyclones a giant killer. Iowa State handed West Virginia its first loss to make it three victories against top-10 teams in two seasons for the Cyclones ... While Smart gets criticized for not pulling his quarterback, Miami's Mark Richt is getting questioned for yanking N'Kosi Perry early in a loss at Virginia . ... No. 21 Auburn lost to Tennessee , but considering the way the Tigers have been playing lately that might not even be an upset. ... It is hard for Rutgers to hit a new low, but a 34-7 loss to Maryland in which the quarterbacks threw five interceptions and completed two passes qualifies. ... UCLA got Chip Kelly his first victory with the Bruins in resounding fashion against Cal, but Nebraska is now 0-6 after a gut-wrenching loss to Northwestern . The other winless FBS teams: UTEP and San Jose State.