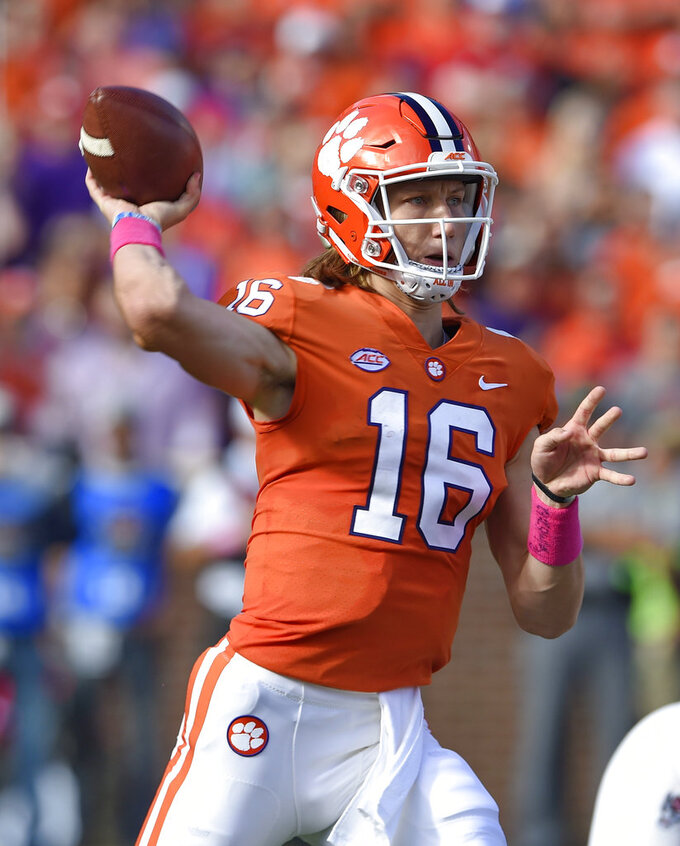 There is no more reason to hedge on Jim Harbaugh's team.

No. 6 Michigan is the Big Ten's best right now and will enter November as a very real College Football Playoff contender after it smothered No. 24 Michigan State on Saturday and No. 2 Ohio State was exposed by Purdue .

Buying in on the Wolverines this season has taken time, understandably. Through three seasons as coach of his alma mater, Harbaugh has been more of a headline-maker than a big-game winner. Oddball tweets. European vacations. Podcasts. Cameo TV appearances. Harbaugh has been college football's most interesting man and one of its highest-paid coaches.

With all that attention and money comes great expectations, and Harbaugh had not delivered at a level equivalent to his paycheck and celebrity.

Michigan was better than expected in Harbaugh's first season, 10-3 after a 5-7 record the year before under Brady Hoke. In 2016, the Wolverines were a debatable spot away from beating Ohio State and playing for a Big Ten championship. Hard to call that disappointing. Last season, having to replace 11 NFL draft picks, Michigan regressed. There were losses again to Michigan State and Ohio State, to South Carolina in a bowl game and an 8-5 finish. This season started with a 24-17 loss at Notre Dame and more reason to pile on Harbaugh as Michigan fell to 0-17 on the road against ranked teams since 2006.

That streak is gone, and Harbaugh is even (2-2) with Michigan State and Mark Dantonio, though definitely not buddy-buddy with the Spartans coach. The Wolverines had a lot to say after beating Michigan State, Harbaugh included .

Forget about all that now.

The last two weeks Michigan has beaten Wisconsin and Michigan State, two teams that beat the Wolverines last season, by a combined 59-20, and both the Badgers and Spartans were fortunate to score that many points. Led by midseason All-America defensive end Chase Winovich and linebacker Devin Bush, Michigan's defense is dominant. The offense is still in good-not-great territory, but quarterback Shea Patterson brings potential for the Wolverines to keep up with more explosive teams.

The first selection committee rankings will come out Oct. 30 and Michigan, off next week, is likely to be no worse than sixth when they do.

Next up on the revenge tour is No. 18 Penn State in the Big House on Nov. 3. The regular season ends in Columbus, Ohio. Harbaugh is 0-3 against the Buckeyes and ultimately he will be judged by how that one goes.

The Buckeyes are a one-dimensional offense and an all-or-nothing defense. All the issues hidden by Dwayne Haskins for the first half of the season were laid bare by Purdue and coach Jeff Brohm in a 49-20 beatdown reminiscent of last season's debacle at Iowa.

Louisville could only watch what the Boilermakers did to Ohio State and long for Brohm to return home as its next coach.

Brohm not only played quarterback for the school, but he was born there and went to high school in the city. The Cardinals are crumbling in Year 5 of Bobby Petrino's second stint with the program. The athletic department is trying to pull out of turmoil, mostly caused by the basketball program, and getting rid of Petrino could cost about $14 million. That's a lot of money when there are other big bills to pay .

And if Louisville does come up with the dough, is home enough of a draw for Brohm? It was for Scott Frost to return to Nebraska last year.

As of now, this doesn't look like it will be a busy season of coaching changes. Louisville and North Carolina are the hottest spots, and neither of those jobs is all that much better than Purdue. Brohm could easily wait it out for something bigger.

Louisville is no Nebraska. Even this watered down version of Nebraska football, years from being a serious national championship contender, is a program with a much higher ceiling than Louisville. But to Brohm, it's home and Cardinals fans can only hope that's enough.

At the start of the season Alabama was No. 1 and Clemson was No. 2, and we're right back there.

The Crimson Tide have done nothing to make anyone doubt its status. The Tigers had a couple of early scares, but now they look exactly like who we thought they were.

Clemson turned aside No. 16 North Carolina State with ease , a battle of unbeatens that was never close. Clemson has suffered a surprising upset in the ACC the past two seasons on the way to the conference title and the playoff. Maybe the Tigers have another gaffe in them, but don't bet on it.

The Crimson Tide, meanwhile, head into an off week, yet to be tested and on pace to set a record for scoring. The Tide go to No. 5 LSU on Nov. 3. Maybe those Tigers can find a way to slow down Tua Tagovailoa and Alabama — because they certainly won't be able to keep up. Have you seen LSU's offense?

Alabama and Clemson have met in the playoffs three straight seasons, with Alabama winning twice. It feels like we're headed for Part IV.

No. 25 Washington State is the lone Pac-12 left with fewer than two losses after the Cougars capped a huge day in Pullman by beating No. 12 Oregon for the fourth straight season. The last time Wazzu beat Oregon four straight was 1981-84.

The Pac-12's playoff hopes have been downgraded from remote to whatever is worse than remote but better than mathematically eliminated. But let's not dwell on the negative.

Coach Mike Leach gets a lot of attention, a lot good and some not so good, for his train-of-thought musing and quirkiness. He also continues to be one of the better head coaches in college football, skilled at replacing quarterbacks and assistant coaches. Leach is 33-14 in his last 3½ seasons in Pullman. His act might not play everywhere, but few coaches squeeze more out of their resources.

AROUND THE COUNTRY: The folks at Auburn can calm down and get off coach Gus Malzahn's back for a little while after the Tigers found some offense , thanks to Mississippi's generous defense. Auburn is off next week, but November should be interesting on the Plains with No. 17 Texas A&M and road trips to No. 8 Georgia and No. 1 Alabama on the slate ... Nebraska's program record 10-game losing streak is over and a two-game winning streak is on the horizon. The Cornhuskers play Bethune-Cookman next week, the game it added to replace the Akron game that was canceled by severe weather in September ... The most interesting thing about Alabama's latest romp was the coaching intern getting a Gatorade bath after the Crimson Tide crushed Tennessee. ... How's that Oklahoma defense, post-Mike Stoops? Pretty good so far. The Sooners held the Horned Frogs to 275 yards and 5.0 per play in Game 1 with Ruffin McNeill as defensive coordinator. The Horned Frogs peaked against Ohio State and have been regressing ever since, but still a good step for the Sooners. ... There are more physically gifted linebackers than Washington's 225-pound Ben Burr-Kirven, but maybe none more productive. The senior had 15 tackles, giving him a nation-leading 108 for the season, and an interception for the 15th-ranked Huskies against Colorado .