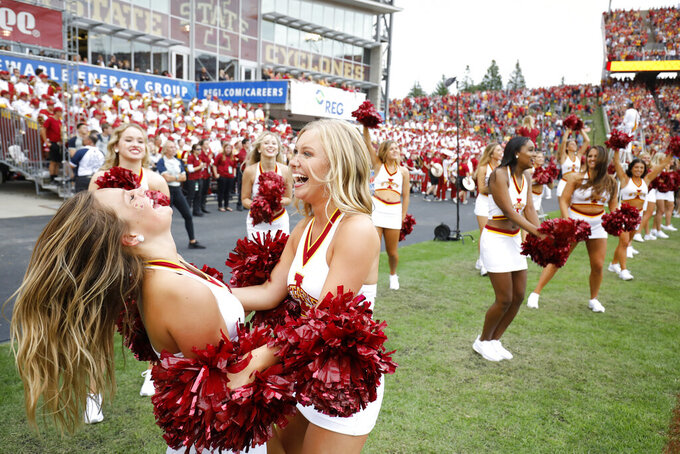 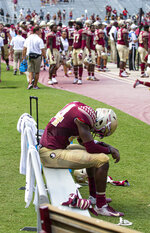 How good a conference is from top to bottom doesn't matter all that much.

The only thing that really counts in the College Football Playoff era are the teams at the top. The Southeastern Conference's 'bad' Saturday included losses to Memphis, Wyoming, North Carolina and ... Georgia State!

But on the biggest stage of the opening weekend, in the only game involving two ranked teams, No. 16 Auburn rallied behind a freshman quarterback to beat No. 11 Oregon and that means it was a fine weekend for the SEC and another bad one for the Pac-12.

That may not be entirely fair and the Ducks certainly don't deserve to be tossed in the pay-no-mind pile after one game. But these are the games Pac-12 teams have not been winning frequently enough, and it helps explain why the conference has not had a playoff representative each of the last two seasons and three times in five years of the CFP.

Last season, it was Washington losing a neutral site game to Auburn, digging the Pac-12 a hole it never climbed out of. This one stung worse. Justin Herbert and the Ducks controlled the first 40 minutes and should have led by even more than 21-6 late in the third quarter. But they didn't and they missed those points in the end.

Unless Southern California or No. 25 Stanford emerges as the conference's best playoff hope, Oregon's shot at Auburn was the Pac-12's best chance to make a statement.

Now that's gone and the Pac-12 remains tangled in a terrible narrative. The Conference of Champions doesn't win big football games and the news off the field is always about what the Pac-12 lacks: Revenue to keep up with the rest of the Power Five. Its network on DirecTV. A competently run Southern Cal athletic department.

Meanwhile, the SEC's not-so-great-start included its six ranked teams (No. 2 Alabama, No. 3 Georgia, No. 6 LSU, No. 8 Florida, No. 12 Texas A&M and No. 16 Auburn) going 6-0 by a combined score of 219-50 — which makes Tennessee being the laughingstock of college football on Saturday not that big of a deal.

No team in the country could have used an opening victory to wash away the awful taste of last season more than Florida State, which had its first losing season since 1976.

Instead, Year 2 under coach Willie Taggart started with a collapse against Boise State.

It was a program (Boise State) that knows exactly what it is, fearless and confident, beating one that is still searching for that elusive winning culture that Taggart talked a lot about this offseason. Sure, there is still some roster building to do at Florida State, but the window for blaming Jimbo Fisher for the mess left behind is closed.

"I think everybody played a part in the mistakes. But I will say one game will not define this football team," Taggart said.

Florida State's biggest problem going forward might be negativity and doubt. Taggart wouldn't be the first coach with a high-profile program consumed by it. Think Rich Rodriguez at Michigan and Charlie Strong at Texas. They weren't necessarily good fits in the first place, but once they got off to bad starts they could never dig out. Every game was a referendum on their programs and fans just never got on board.

That's where things stand now at Florida State. Is Taggart on the hot seat in Year 2 with about an $18 million buyout? Probably not, but he desperately needed to change the conversation and Saturday was an enormous missed opportunity.

Justin Fields put together a game's worth of highlights in half a quarter for Ohio State against FAU. The much-anticipated debut of Fields as the Buckeyes' starting quarterback resulted in four touchdowns in the first four drives.

The rest of the game was kind of sleepy for Fields and the Buckeyes, who will get a better test next week when Cincinnati comes to the Horseshoe. Fields, the former five-star prospect who was a backup to Jake Fromm at Georgia last season, has immense potential. He is the type of player who could make Ohio State a threat to the Alabama-Clemson reign atop college football.

The Big 12 was on the brink of an embarrassing day, with three of its teams struggling to shake FCS teams.

The most startling scare came in Ames, Iowa, where No. 21 Iowa State needed three overtimes to beat Northern Iowa. The game had all the making of a classic upset. The Cyclones held a big advantage in yards from scrimmage and plenty of opportunities to build a comfortable lead. But they made just enough mistakes and UNI just enough plays to turn it into a nail-biter.

Less surprising was Kansas scoring late against Indiana State to give Les Miles his first victory as Jayhawks coach and West Virginia needing to rally against FCS power James Madison to make coach Neal Brown a winner in his Mountaineers debut. Neither of those teams is expected to contend for a Big 12 title.

Iowa State, however, was the consensus third-best team in the Big 12 coming into the season. That could still be the case. It was a weird game and almost losing to an FCS team is also called winning.

AROUND THE COUNTRY: No. 6 LSU visits No. 10 Texas next week, with both teams coming off blowouts. Tigers quarterback Joe Burrow and Texas' Sam Ehlinger combined to go 51 for 65 with nine touchdown passes Saturday night ... North Carolina coach Mack Brown returned to college football with an upset against South Carolina. The ACC Coastal is so wide open that the Tar Heels shouldn't be counted out. ... No. 1 Alabama hammered Duke in its annual neutral site opener and the most notable part might have been Tide coach Nick Saban getting flagged for unsportsmanlike conduct for screaming at officials with his team leading 35-3 late in the third. ... Another former Georgia quarterback had a strong debut with his new team. Jacob Eason threw for 349 yards and three touchdowns as No. 13 Washington cruised past Eastern Washington. If Eason reaches his five-star ceiling, the Huskies become a serious playoff threat. ... No. 24 Nebraska didn't look like a team deserving of a ranking against South Alabama. The game was a reminder of why the Cornhuskers went 4-8 last season ... The American Athletic Conference grabbed a couple of Power Five pelts in the opening weekend, with Memphis beating Ole Miss as a follow-up to Cincinnati's victory against UCLA on Thursday ... Boise State's comeback victory gave the Mountain West three victories against Power Five teams this season, with Hawaii beating Arizona in Week 0 and Nevada stunning Purdue on Friday night.