Aresco says no chance of UConn staying as football member 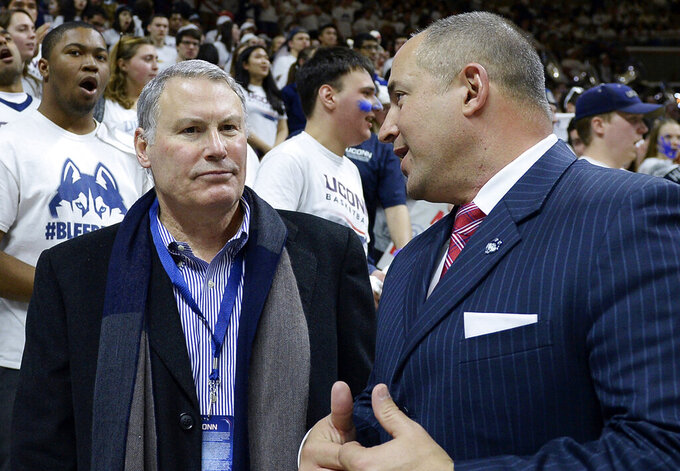 FILE - In this Feb. 13, 2017, file photo, American Athletic Conference commissioner Mike Aresco, left, talks with Connecticut athletic director David Benedict, right, before an NCAA college basketball game between UConn and South Carolina in Storrs, Conn. On Thursday, June 27, 2019, Aresco said that there is no chance it will allow UConn to stay as a football-only member in the American after most of UConn's athletic programs were officially welcomed back into the Big East, a conference which does not offer football. (AP Photo/Jessica Hill, File)

STORRS, Conn. (AP) — American Athletic Conference commissioner Mike Aresco said Thursday there is no chance the conference will keep the University of Connecticut as a football-only member.

UConn this week agreed to rejoin the Big East Conference for basketball and most other sports. The Big East does not compete in football.

UConn Athletic Director David Benedict said Thursday he wanted to talk to Aresco about football and about UConn's exit from the conference. The AAC bylaws require UConn to give 27 months' notice before leaving the AAC. It also must pay a $10 million exit fee.

The Associated Press asked Aresco if it was possible the league would be interested in retaining UConn's football program.

"The short answer is no, not a chance," he said.

He said there also have not been any negotiations on the terms of UConn's exit.

Aresco also said he doesn't believe the school's departure will hurt his league. He said no decisions have been made on whether the AAC will seek to replace UConn, though he said there have been a number of inquiries from other schools.

He also said the league would not prioritize the Northeast if it does decide to bring on a new member, emphasizing the AAC is a national brand.

"We're moving forward," he said. "None of our goals have changed one bit from this. We feel very confident because we're strong and we've been strong. We're focused on the future and this is not going to change anything for us in that regard."