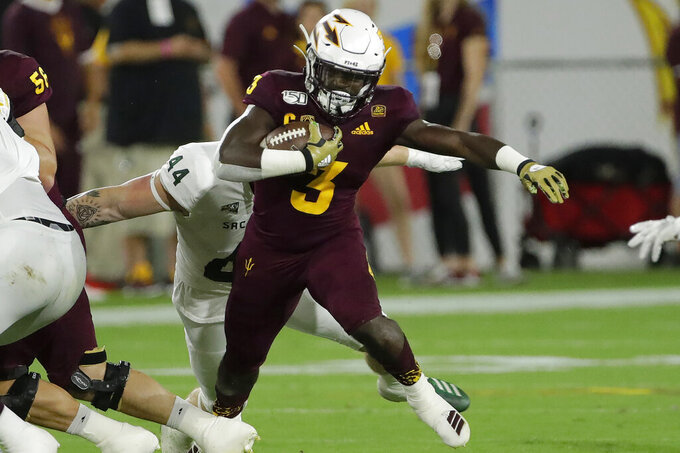 TEMPE, Ariz. (AP) — Arizona State's Eno Benjamin slipped into an open area across the middle, sprinted past a defender and into the end zone for a long fourth-quarter touchdown.

Until that big play, the Sun Devils seemed bogged down in the desert sand, unable to get out of their own way.

Struggling against an FCS opponent wasn't exactly what they had in mind for a Top 25 tuneup.

"We can't play offense on our heels," Arizona State coach Herm Edwards said. "That's what it looked like a lot of tonight."

The Sun Devils saw Friday night's game as a chance to clean up a few things with a road game against No. 19 Michigan State next.

Instead, they had a few growing pains against the Hornets (1-1) after beating them 55-0 in the teams' only other meeting.

"As an offense, I really didn't feel like we played to the standard we set as an offense," said Arizona State's Jayden Daniels, who threw for 304 yards and a touchdown on 17-of-27 passing.

Arizona State's defense was solid until the Hornets seemed to find something in the fourth quarter. Kevin Thomson hit Pierre Williams on a 40-yard pass, then found Tao McClinton on a 9-yard TD that pulled the Hornets within 12-7, giving themselves at least a shot at the upset.

"Our guys played hard," Sac State coach Troy Taylor said. "They hung in the game and had a chance to win it at the end. I am proud of how our guys prepared and how they competed."

Arizona State struggled before finally getting a spark early in the second quarter, when Brandon Aiyuk returned a punt 38 yards to Sac State's 9. A touchdown seemed imminent when A.J. Carter caught a pass from Daniels, but he fumbled just before crossing into the end zone and the Hornets recovered.

The Sun Devils had another good opportunity when their defense stopped Sac State on a fourth-and-1 from its own 33-yard line.

They botched that, too.

An airmailed snap on a third down forced Ethan Long to fall on the ball and Arizona State to settle for Zendejas' 36-yard field goal.

The Sun Devils led 3-0, were out-gained 131-78 and heard a few boos from the home crowd at halftime.

"I get it," Edwards said. "When you aren't playing well, they boo."

Zendejas kicked two more field goals in the third quarter, one after Frank Darby's 68-yard TD catch was wiped out Aiyuk's blindside block well away from the ball.

Aiyuk next caught a 52-yard pass to the Hornets' 5 and the Sun Devils lost a yard on three successive plays, leading to another Zendejas field goal to open the fourth quarter.

Sac State cut the lead to five before Benjamin broke off his long touchdown, giving the Sun Devils the cushion they needed.

"I've been on some games like that as a player and a coach, on the bad side of it," Edwards said. "We were on the good side of it, we won."

Holding a Pac-12 team in check on the road should be a huge boost of confidence for Sac State headed into Big Sky play.

"I think what we have seen is that our team is pretty resilient," Taylor said. "If we execute, we have a chance to beat anybody."

Arizona State regressed from its opener and will need to get a lot better with a road game against 19th-ranked Michigan State up next.

Thomson held his own against the bigger, stronger Sun Devils, throwing for 263 yards and a touchdown on 32-of-50 passing. He also had a few throws he probably would like to have back and his receivers dropped a few balls.

"He will come back from it and learn from it," Taylor said. "He has a lot of ability. It is a big stage and he will play better."

Arizona State plays at No. 19 Michigan State on Sept. 14.