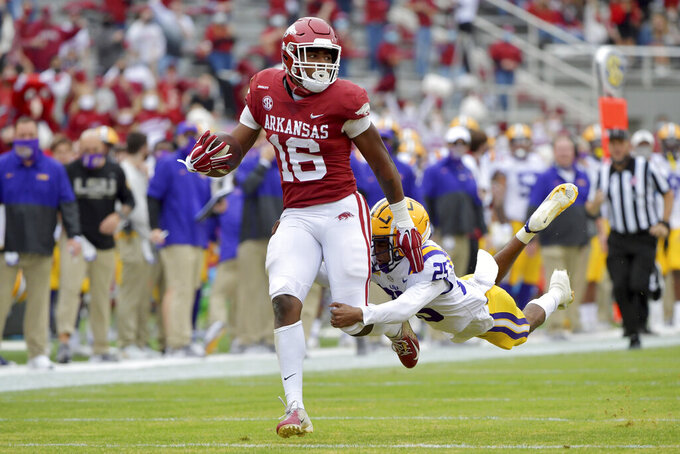 FAYETTEVILLE, Ark. (AP) — Arkansas left the Southwest Conference three decades ago, but you wouldn't know it from looking at the start to this season's schedule.

The Razorbacks start the 2021 slate against three former SWC foes in the first four weeks, including Saturday’s home opener against Rice. After hosting Texas next week, the Razorbacks will travel to Arlington, Texas, to take on Texas A&M in the SEC opener two weeks later.

Arkansas has not played Rice since beating the Owls 20-0 in 1991 — the Razorbacks' final season in the SWC.

Coach Sam Pittman said the renewal of games against long ago foes should spark a lot of interest among the Razorbacks’ fan base who followed the program during its SWC heyday.

“I love it for them, that they’re able to reminisce about the old days,” he said. “I think it will be really fun bringing these teams back. I hope there will be some older folks that will remember that conference rivalry and that they can come back and enjoy it and have a heck of a day.”

The Owls are just anxious to start the season after playing just five games in 2020 because of COVID-19 related cancellations. Fourth-year coach Mike Bloomgren said his team was looking forward to playing a team from the highly regarded SEC West.

“We are just excited for the season to start after what seems like a long offseason,” said Bloomgren, whose team returns 19 starters from a squad that went 2-3 in 2020. “We’re excited to play in an amazing environment, excited to play a team from the SEC West with a bunch of guys with SEC experience on the roster."

Bloomgren had not named a starter at quarterback for Saturday’s game and plans to play both Wiley Green and Luke McCaffrey. McCaffrey is a transfer from Nebraska by way of Louisville, where he spent about a week early in the summer after he left Nebraska.

“We’re going to keep it under wraps for as long as we can,” said Bloomgren. “The people at Arkansas are going to see two quarterbacks this weekend. They’ve earned the right to do it.”

PLAYING AS A FAVORITE

In the shortened 2020 season, Arkansas played an SEC-only 10-game schedule. In each of those 10 games, the Razorbacks were an underdog, finishing the season 3-7 with several narrow losses. Arkansas was a 19-point favorite according to FanDuel Sportsbook heading into the opener, but Pittman said his team was not taking a different approach.

“We’re just worried about how we play,” he said. “We want to play physical and not make mistakes. Just play tough. We just need to keep it about Arkansas and just play our best. We approach every game that way, but it is different because we’re expected to win this game.”

Pittman said his team is continuing to battle through camp injuries, but expects to be at close to a full roster by game time.

“I still think we’re a little beat-up right now,” he said. “We haven’t had any injuries that are season-ending injuries, but we’re still a little beat up a little bit more than I’d like to be. We anticipate we’ll get most all of them back for the game.”

Rice starting right tackle Jovaun Woolford will take the field as one of the oldest players in college football this season. Woolford is in his seventh year of college football because of the waiver during the pandemic season of 2020. Woolford graduated from high school in 2015. Besides a conventional redshirt season, he also earned a medical redshirt in 2018 and an extra season when the NCAA ruled last season would not count toward eligibility.

Arkansas starting quarterback KJ Jefferson gave Arkansas fans a glimpse of his potential in the final game of the regular season last year. In his only start, against Missouri, Jefferson was 20 of 41 passing for 295 yards and three touchdowns. He was voted a captain by his teammates.

“I think any time you start a new quarterback, it’s his team,” said Pittman. “It’s a different team than it was with Feleipe (Franks). KJ obviously has different assets. I think if we’re looking for a guy that runs this type of offense, KJ and Malik (Hornsby) is what we’re looking for.”