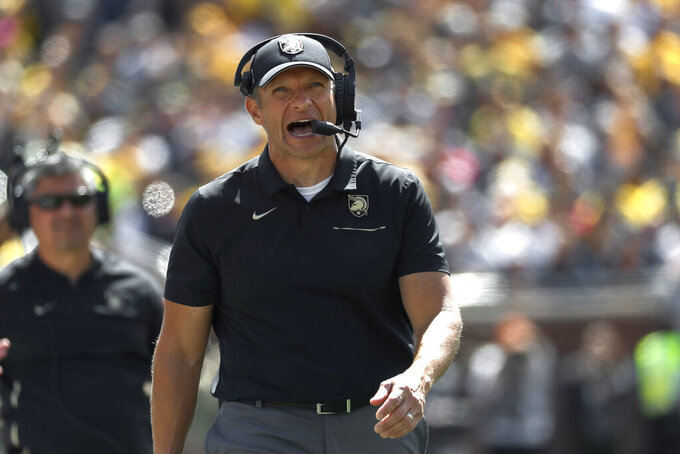 FILE - In this Sept. 7, 2019, file photo, Army coach Jeff Monken watches during the second half of the team's NCAA college football game against Michigan in Ann Arbor, Mich. Army won nine games last season and finished just outside the Top 25. That's a good omen for coach Jeff Monken as he starts his eighth season along the banks of the Hudson River on the verge of becoming the second-winningest football coach in West Point history. (AP Photo/Paul Sancya, File)

Army won nine games last season and finished just outside the AP Top 25 despite having to cope with a schedule that constantly changed because of COVID-19.

Coach Jeff Monken hopes to build off that success despite the usual loss of senior stars. The class of 2021 won 35 games, the most for a class in West Point history.

“I'm just excited about the leadership that we've got, a good group of seniors,” said Monken, whose 49 wins in seven seasons put him at the doorstep of second place all-time at the academy. “I am anxious to see them compete. It's going to be interesting."

Last season's schedule ended up including three Championship Subdivision teams the Black Knights defeated by a combined score of 118-35, though The Citadel played Army to a near standoff, losing just 14-9 at Michie Stadium. Shutouts of Middle Tennessee State (42-0) and archrival Navy (15-0) helped Army end the season with the top defense in the nation (275.3 yards per game) under first-year coordinator Nate Woody.

Those gone from that defense include linebackers Jon Rhattigan and Amadeo West. Also departed are 6-foot-6, 300-pound offensive guard Peyton Reeder and fullback Sandon McCoy (10 TDs), key cogs on a team that finished fourth nationally in rushing with an average of 273 yards.

“I wish we could re-sign those guys that we lose every year to new contracts and keep them around," Monken joked. “But that’s not college football.”

Still, more than 20 returning players participated in 10 or more games on defense last season. The offense had six quarterbacks take snaps in games. Monken hinted the quarterback position will have many faces, among them seniors Christian Anderson and Jabari Laws, junior Tyhier Tyler, and sophomore Cade Ballard.

“There are enough guys that played,” said Monken, who is two wins from tying Jim Young for second in academy history, behind Hall of Famer “Red” Blaik's seemingly untouchable 121 wins in 18 seasons. “My concern isn’t the experience. It’s just them playing together as a unit. It’s going to be key for us."

“We lean on other leaders on the team,” Smith said. “It’s by committee. There’s no one guy. It’s been going well.”

Cockrill had a breakout junior year with 28 tackles, including seven for losses. He led the team with four QB hurries and had two pass breakups and one forced fumble. Cunningham had 37 solo stops, and Smith tied for the team lead with Rhattigan in total tackles with 78. Broughton led the team with 40 solo tackles.

“We want to make sure that we don’t outsmart ourselves,” Woody said. “Being able to be somewhat multiple in coverages and make quarterbacks have to think where they want to go with the ball is incredibly important to us.”

Army finished last season at 9-3 after a three-point loss to West Virginia in the Liberty Bowl, just missing its third double-digit win season in four years. The Black Knights were without eight key players and offensive coordinator Brent Davis.

Army won the Commander-in-Chief’s Trophy last year for the third time in four years with a decided home advantage — both games were played on consecutive weekends at Michie Stadium. The Navy game was moved from Philadelphia because of the pandemic.

The traditional regular-season finale against Navy this year is at East Rutherford, New Jersey. The game against Air Force will be played in Arlington, Texas. The Falcons and Black Knights have not played at a neutral site since 1965 at Soldier Field in Chicago. Air Force is at a little bit of a disadvantage because they play at Annapolis in September.

The schedule is a distinct upgrade from last year. The Black Knights play two Power Five teams and Liberty, which finished ranked 17th last season. The stiffest challenge promises to be on the road at Wisconsin, ranked No. 12 in the preseason. Wake Forest of the ACC visits in late October.