Badgers RBs have big goals as they honor their former coach 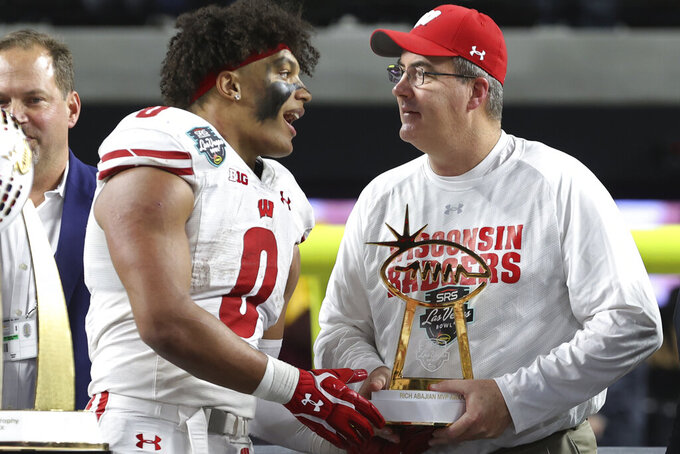 FILE - Wisconsin running back Braelon Allen (0) and Wisconsin head coach Paul Chryst confer after defeating Arizona State in the Las Vegas Bowl NCAA college football game Thursday, Dec. 30, 2021, in Las Vegas. After playing in five of the first seven Big Ten championship games, the Badgers have made it to Indianapolis just once in the last four years. They blew a chance to get there in 2021 by losing at Minnesota in their regular-season finale. (AP Photo/L.E. Baskow, File)

MADISON, Wis. (AP) — Wisconsin’s Braelon Allen already found one indelible way to honor the man he credits for much of his college football success.

Allen and his fellow Wisconsin running backs plan to make an equally compelling tribute to their former position coach on the field this fall. Gary Brown died April 10 at the age of 52 .

Allen rushed for 1,268 yards and 12 touchdowns as a 17-year-old freshman last year, even though he was recruited primarily as a defensive player and didn’t have a featured role on offense until the fifth game of the season.

He leads a Wisconsin rushing attack that also features Chez Mellusi and Isaac Guerendo, who are coming back from injuries that ended their 2021 seasons prematurely. The 18th-ranked Badgers open the season Saturday by hosting Illinois State.

Allen revealed his big plans for them this summer when he tweeted out a photo of himself, Mellusi and Guerendo next to a picture of Montee Ball, Melvin Gordon and James White, running backs on the Badgers’ 2012 Big Ten championship team. Allen added the message, “Wisconsin Badgers: The Best Backfield in America.”

He’s hoping the current trio can fare even better than that one from a decade ago.

Matching or exceeding the achievements of that 2012 trio is a tall order.

Ball rushed for 1,830 yards and 22 touchdowns in 2012 after finishing fourth in the Heisman Trophy balloting a year earlier. White ran for 806 yards and Gordon 621 yards that season.

Gordon was drafted in the first round, Ball in the second. White, a fourth-round pick, was a three-time Super Bowl champion.

“They’re chasing the right group,” Wisconsin coach Paul Chryst said. “I was lucky to be with that (2012) group. And I really like the group that we have right now with Braelon, Chez and Isaac.”

Reaching that goal would represent one last thank-you gift for the position coach who helped shape them.

Brown already had accomplished quite a bit by the time he joined Chryst’s staff last year.

After rushing for 4,300 yards in his NFL playing career, he was a longtime NFL running backs coach who helped DeMarco Murray and Ezekiel Elliott each win league rushing titles with the Dallas Cowboys.

He did some of his finest work during his abbreviated one-year stint at Wisconsin. He coached the Badgers through the entire regular season, but his health issues prevented him from joining them for their Las Vegas Bowl victory over Arizona State.

Although an official cause of death wasn’t announced, Brown talked openly during his Wisconsin tenure about his multiple bouts with cancer. Wisconsin’s running backs attended his funeral in Pennsylvania.

“I learned so much from that man,” Mellusi said. “I wouldn't even be here if it wasn’t for him.”

Mellusi, a Clemson transfer, said Brown was the main person recruiting him to Wisconsin. Mellusi rushed for 815 yards in nine games last season.

Guerendo showcased his breakaway speed when he rushed for an 82-yard touchdown in a 37-7 rout of Eastern Michigan.

“Probably the biggest jump I ever made was when (Brown) came in, being able to play faster and feeling like a running back really,” Guerendo said. “Just being able to bring that perspective, telling us how to be confident and decisive in our runs.”

Mellusi’s 2021 season ended when he tore his left anterior cruciate ligament i n early November. Guerendo played just four games before a Lisfranc fracture knocked him out for the rest of the season. Both are healthy now.

Mellusi and Guerendo watched how Allen wore down from his heavy workload late last year, enabling Minnesota to contain him in a game that cost Wisconsin a Big Ten championship game appearance. They want to make sure it doesn’t happen again.

They stayed at Wisconsin knowing their carries might be limited because of Allen’s presence.

“If you want to play running back, I feel like this is the place to be,” Mellusi said.

They capitalize on that Wisconsin tradition by communicating with some of the Badgers’ former standout running backs for advice and feedback. They enjoy working with new running backs coach Al Johnson, a former offensive lineman.

And they also continue to benefit from all the lessons they received from Brown.

“What I did last season was pretty much because of Coach Brown,” Allen said. “I bonded with him on a personal level to the point where it was so much more than football.”

They’ll pay their respects to him with the effort they give each Saturday.