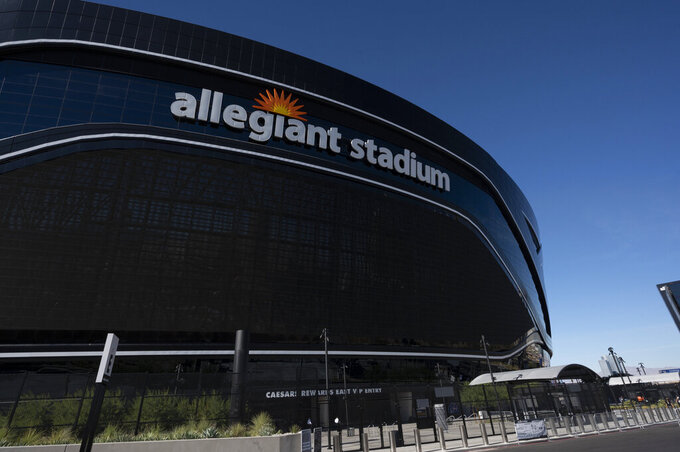 FILE - Exterior view of the Allegiant Stadium before the Las Vegas Raiders played the Kansas City Chiefs during an NFL Professional Football Game Sunday, Nov. 14, 2021, in Las Vegas. Las Vegas is adding the NFL’s crown jewel with the Super Bowl coming to cap the 2023 season. The league’s biggest event will follow the Pro Bowl this season and the NFL draft next year. (AP Photo/John McCoy, File)

Line: Wisconsin by 6, according to FanDuel Sportsbook.

After failing to live up to preseason expectations of playing for a conference title, the winner between the Sun Devils and Badgers will at least get to end 2021 on an upbeat note. Wisconsin’s loss to Minnesota in the season finale cost it a place in the Big Ten championship game and halted a seven-game winning streak. Arizona State’s Pac-12 championship aspirations were thwarted with a second-half implosion at Utah and a first-half no-show at Washington State the following week, but they responded by winning three of their last four.

Wisconsin RB Braelon Allen vs. Arizona State LB Kyle Soelle. It took a month for the freshman Allen to find himself before ripping off seven consecutive 100-yard games, totaling 1,013 yards and 11 touchdowns in that span to make his case for being the next great Badgers tailback. Soelle, who leads the Sun Devils with 82 tackles and was third on the team with 7 1/2 tackles for loss, will aim to contain Allen and make Wisconsin QB Graham Mertz prove he can throw the ball without turning it over.

Arizona State: QB Jayden Daniels is a dynamic runner, as his 36 carries of 10-plus yards were the most in the Pac-12 regardless of position this season. With 1,000-yard rusher Rachaad White opting out, Daniels will have to use his legs to create against the stingiest run defense in the FBS. Wisconsin allowed just 65 yards per game on the ground and 2.14 yards per carry.

Wisconsin: LB Leo Chenal was a machine, amassing 106 tackles, 17 tackles for loss and seven sacks in 10 games. This could be his last college game. Defensive coordinator and 10-year NFL veteran Jim Leonhard believes the junior is more than ready to make the jump. “I don’t know what else he has got to prove,” Leonhard said.

Wisconsin is playing in its 20th consecutive bowl game. That is the second-longest streak in Big Ten history, trailing Michigan’s 33-year run from 1975-2007. ... Arizona State is the only FBS defense not to allow a play of 50 yards or longer this season. ... Mertz threw seven touchdowns against three interceptions in the Badgers’ eight wins. In four defeats, the sophomore had two touchdowns and seven interceptions. ... The Sun Devils will not have three of their top defenders after LB Darien Butler, CB Jack Jones and CB Chase Lucas opted out to prepare for the NFL draft. Butler was tied for the team lead with 8 1/2 tackles for loss and three interceptions. Jones also had three picks and forced three fumbles. ... Wisconsin is 5-1 in bowl games under coach Paul Chryst. ... Arizona State is making its third appearance in the Las Vegas Bowl. The Sun Devils are 0-2 with losses to Boise State in 2011 and Fresno State in 2018. ... This will be the first time the Las Vegas Bowl is held at Allegiant Stadium, home of the Raiders and UNLV, after last year’s game was canceled because of the COVID-19 pandemic. The game had been staged at Sam Boyd Stadium from 1992-2019.