Baylor gets bowl eligible with 35-24 win over Texas Tech 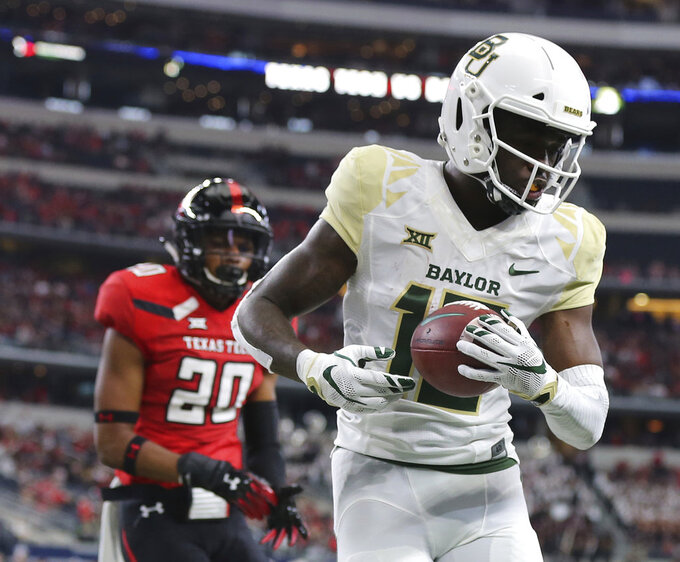 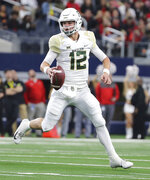 ARLINGTON, Texas (AP) — Charlie Brewer was going to play more games for Baylor no matter what happened Saturday. Now the sophomore quarterback gets to go to a bowl with the seniors who stuck around through some tough times.

Brewer threw for 308 yards with three touchdowns and ran for a score as the Bears beat Texas Tech 35-24 in the regular season finale to get bowl eligible a year after winning only one game.

"Excited to have more time with those seniors," Brewer said. "I have the utmost respect for those guys that have stuck around here through tougher times than I could ever imagine."

The Red Raiders (5-7, 3-6 Big 12) ended their third consecutive losing season with lingering questions about the future of coach Kliff Kingsbury, their former quarterback who is 35-40 in six seasons as head coach — 19-35 in Big 12 games. They lost their last five games.

Baylor (6-6, 4-5) has 10 fifth-year seniors who remained through a sexual assault scandal that rocked the school more than two years ago.

They arrived on the Waco campus when the Bears were in the middle of consecutive Big 12 titles, but are on their third coach and went through that 1-11 season a year ago in coach Matt Rhule's debut.

"Of all the games I've been a part of, this is probably the most special," said right guard Blake Blackmar, one of those fifth-year seniors. "You think about all the things we've been through and everything that could have happened and would have happened. You've got to shut all of that out and the most important thing is what we're going to do next."

Brewer, who was 22-of-30 passing, put Baylor ahead to stay with a 1-yard keeper less than two minutes into the second half.

Kingsbury, who has two years left on his contract, expected to sit down soon with athletic director Kirby Hocutt. The coach didn't give any real indication of what he expected.

"Going to talk to Kirby and take it from there," Kingsbury said.

"He's been phenomenal with me, and supportive and given me everything I needed to be successful at Texas Tech," Kingsbury said.

After Tech had three consecutive incompletions on its first possession after halftime, the Bears drove for John Lovett's 3-yard TD run that made it 28-17. Lovett ran 28 times for 125 yards.

Still-gimpy McLane Carter, making his first start at quarterback for Texas Tech since an ankle injury in the first half of the season opener, was 21-of-37 passing for 247 yards with two touchdowns, and two interceptions in the fourth quarter.

Carter was feeling as close to fully healthy as he had since the opener. But he was grimacing and walking gingerly after getting sacked on the opening drive on the game right before hitting Ja'Deion High for a 54-yard TD pass.

Soon after that, Carter left the field with a trainer but never missed a play after Baylor used more than 9 minutes on its opening 19-play drive that ended with the first of two TD catches by Denzel Mims.

True freshman Alan Bowman was the nation's top passer early in the season after replacing Carter but is sidelined for the second time because of a partially deflated lung. Dual-threat Jett Duffey, who had 524 total yards in a near-upset of Texas two weeks ago, also missed the finale because of knee and foot issues.

Baylor: The Bears entered this season with 17 losses their previous 19 games. One of those wins in the Cactus Bowl two seasons ago to end a six-game losing streak. They bounced back from a disappointing 16-9 loss to TCU a week ago, when they were trying to get bowl eligible in the home finale.

Texas Tech: The last winning season for the Red Raiders was 7-6 in 2015, and their only other winning season under Kingsbury was 8-5 in his 2013 debut season that started with seven consecutive wins.

Baylor: Wait to find out what bowl game the Bears will play in.

Texas Tech: Season over, 2019 opener is Aug. 31 at home against Montana State.