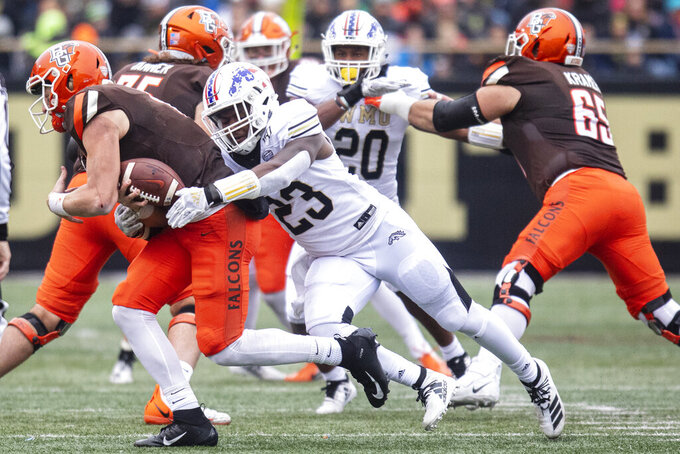 KALAMAZOO, Mich. (AP) — Levante Bellamy rushed for 178 yards and a career-high four touchdowns — including one that covered 75 yards — as Western Michigan remained unbeaten at home with a 49-10 defeat of Bowling Green on Saturday.

Less than a minute into the second half, Bellamy took a handoff and started right, cut back left through a huge gap on the left side of the line, and in a matter of steps was past the secondary and sprinting 75 yards untouched down the sideline to make it 28-3 for the Broncos (5-4, 3-2 Mid-American Conference). The run was his longest, and the longest by a Bronco since Jamauri Bogan's 76-yarder in 2015.

Bowling Green (2-6, 1-3) had taken a 3-0 lead on a Nate Needham 31-yard field goal but Bellamy erased that in the first minute of the second quarter with a TD run from the 9.

Bowling Green's Grant Loy was 18-of-26 passing for 136 yards but threw two interceptions. The Falcons were outgained 574-266 in total yardage. Treshaun Hayward, the MAC leader in tackles (11.63) made 13 Saturday including three tackles for loss.

By John Coon 44 minutes ago
By Pete Iacobelli 2 hrs ago
By Dave Campbell 7 hrs ago
By Anne M. Peterson 8 hrs ago
By Stephen Hawkins 8 hrs ago