Big 12 leaders: Flexibility is sign of strength for future 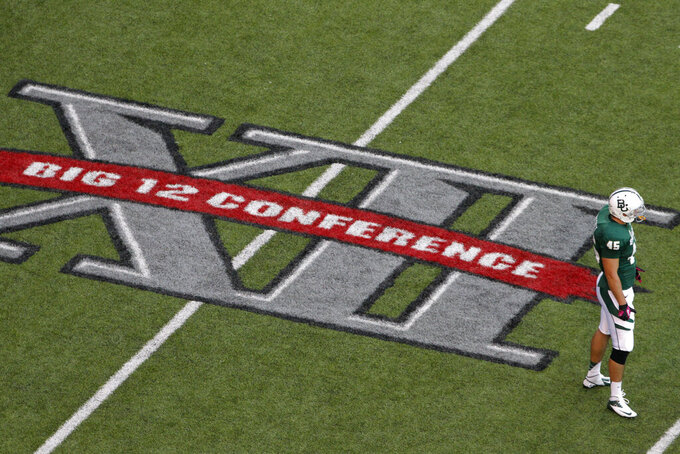 FILE - In this Oct. 13, 2012, file photo, Baylor's Matt Ritchey (45) stands on the field by a Big 12 Conference logo during an NCAA college football game against TCU in Waco, Texas. Big 12 revenue increased to $38.8 million per school for 2018-19, or a total of $388 million. Commissioner Bob Bowlsby said he anticipates those numbers reaching the mid-$40 million range per school before the current broadcast rights deal expires in 2024-25. (AP Photo/Tony Gutierrez, File)

IRVING, Texas (AP) — Another year of increasing revenue in the Big 12 is only part of the reason league leaders believe they are well-positioned for the future.

For them, flexibility as a 10-team conference is a pretty close second to money.

"Our model has agility," said West Virginia President Gordon Gee, who is completing his two-year terms as president of the Big 12 board of directors. "And I think that right now, I'd much rather be a ballerina than an elephant. I think we are the ballerina of the five top conferences."

Commissioner Bob Bowlsby chimed in with a visual of seeing "a character in the paper of me in a tutu." But the man who helped lead the conference out of an era of instability in the extreme understood the point.

"I think our model of playing everybody in football and playing a double round-robin in basketball is the best model," Bowlsby said. "I think our one vs. two is the best playoff postseason model. I like our model better than any other one I see out there."

Big 12 revenue increased to $38.8 million per school for 2018-19, or a total of $388 million. Bowlsby said he anticipates those numbers reaching the mid-$40 million range per school before the current broadcast rights deal expires in 2024-25.

The latest increase of about 6% is the 13th straight year of a bump in Big 12 revenues. Bowlsby said the increase is about 55% over five years.

The figures announced Friday as the league wrapped up its spring meetings don't include third-tier broadcast rights, such as what Texas gets through the Longhorn Network. Those totals vary by school.

Big 12 revenue still ranks third behind the Big Ten and Southeastern Conference. The Big Ten has reportedly distributed up to $54 million to its longest-standing members, and the SEC reported payouts of $43.7 million per school. The Pac-12 surpassed $30 million for the first time this year at $31.3 million. The Atlantic Coast Conference was reportedly just shy of $30 million.

"We don't aspire to third in anything we do," Bowlsby said. "But there are some realities that come from media markets and population density and some of those kinds of things that we don't have a whole lot of control over. What's important is that we're able to generate the revenue that arms our coaches and our student-athletes, our athletic directors, with the tools that it takes to produce championship-caliber teams."

Bowlsby said he could "absolutely" see a new long-term media rights deal with the current 10-team Big 12. But he had his usual words of caution about trying to predict what could happen, including whether a new contract could replace the existing one in less than five years.

"Inside the business, outside the business, I do not believe there's anybody who can predict what it's going to look like three years from now with any measure of precision that would allow me to put a lot of money on it," Bowlsby said.

The looming expiration of TV contracts played a role in the chaotic conference realignments of nearly a decade ago. Among the Power Five leagues, the Big 12 was the closest to extinction. Bowlsby doesn't see the same dynamic in play with all the major conferences having to negotiate new contracts within the next six years.

And Bowlsby believes the Big 12's mindset will be clear, which again traces back to it being the smallest of the Power Five leagues at the moment.

"I think what we have to do is make our league the best we can be and in doing so cause people to want to come and join us, not the other way around," he said.

Baylor received a full portion of league revenue for the first time since the Big 12 decided two years ago to withhold some money in the wake of a sexual assault scandal that led to the departures of coach Art Briles, president Ken Starr and athletic director Ian McCaw.

Bowlsby said Baylor President Linda Livingstone updated the board on several fronts, including the school's wait to hear from the NCAA over possible sanctions. Briles and the university were accused of mishandling allegations of sexual assault involving numerous football players.

"I think President Livingstone has done a tremendous job leading Baylor through a difficult time, and they're clearly making progress," Bowlsby said. "She and her staff and board leadership are to be congratulated there."