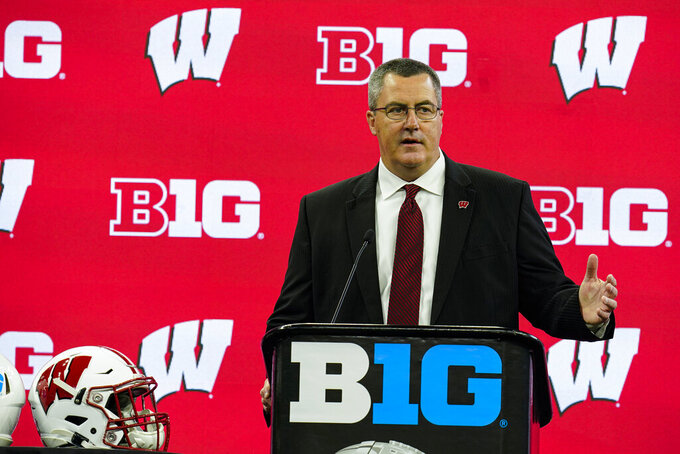 Commissioner Kevin Warren has not definitively backed the proposal to grow the CFP from four to 12 teams, wanting to give time for his constituents to chime in.

Coaches seem to like the idea, including the one current Big Ten coach who has been there.

The calls for playoff expansion started in the Big Ten a few years back when the conference's champion was shutout of the four-team field three straight seasons. Then-Commissioner Jim Delany didn't publicly crusade to blow up the system, but he made it known that a playoff that didn't include the Big Ten champ needed re-working.

Some coaches and athletic directors in the conference jumped on board and became more vocal advocates, including Northwestern's Pat Fitzgerald.

“I’m a huge fan,” said Fitzgerald, whose Wildcats have won two Big Ten West titles and lost two Big Ten championship games in the last three years. “I’m not surprised about the schools that are against it. That’s another shocker.”

There hasn't been much push back against expansion, but earlier this week Clemson coach Dabo Swinney said he wasn't sure were even four teams worthy of playing for a national championship in most seasons.

Fitzgerald has a program that lives among the middle class of college football: Good enough to make run that could have their fans thinking playoff in November in some seasons, but clearly not among the elite few that are regularly making it.

He has some questions, including how many games would end up on the schedule is the playoff is expanded — a move that would have early-round games.

"You’re going to have more teams playing more games. What are we doing in the offseason? How much time are we taking? Are we talking the first few games on college campuses? I’d love to bring some guys up from the South to Chicago in December,” Fitzgerald said. “I’d love it. I’d do cartwheels.”

The College Football Playoff management committees, which Warren is part of, have said it won't be until early fall before an expansion plan could be approved and the earliest implementation would be the 2023 season.

A glance at the recruiting rankings for the class of 2022 will find four Big Ten teams in the top 12.

Ohio State and Penn State are Nos. 1 and 2 in the 247 Sports composite rankings. Not shocking.

Michigan comes in at 11. Pretty routine for the Wolverines.

At No. 12 is Rutgers. Yes, the Scarlet Knights are killing it on the recruiting trail in Year 2 of Greg Schiano's second stint as coach.

Rutgers has 15 players committed, including five four-star prospects. Those four-stars include the No. 1 player in the state of New Jersey, offensive lineman Jacob Allen from Princeton. The Scarlet Knights also have two more verbal commitments from a couple of top-10 rated players in the their home state.

Schiano said working for a few years under Urban Meyer at Ohio State, he stole a few ideas about effective recruiting.

"I have said this before, I thought I was one of the hardest-working recruiters in the business and when I worked for Urban I saw a guy that trumped me for sure," Schiano said. “So great experience and I’m excited about the players we’re bringing in.”