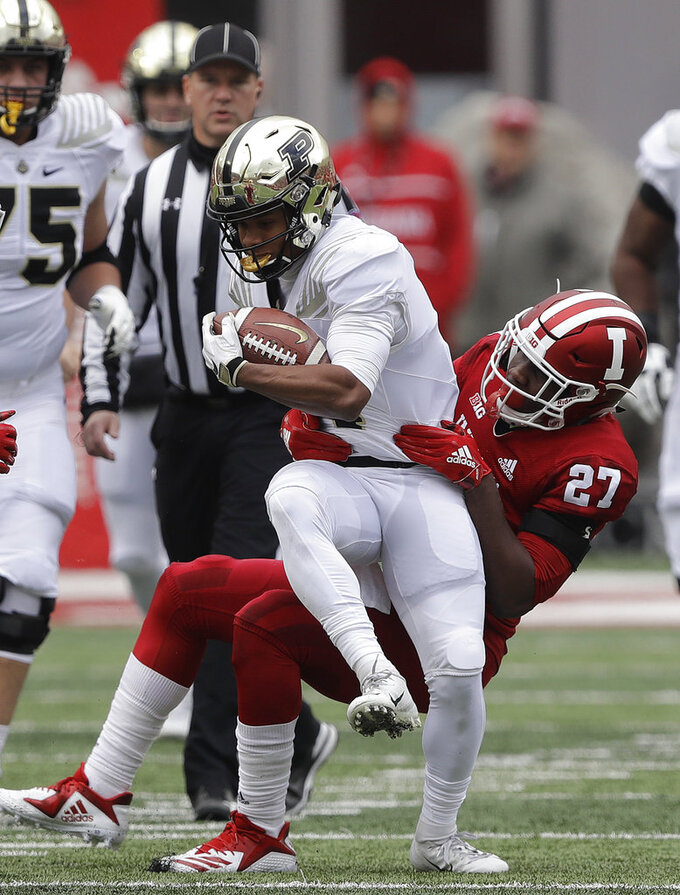 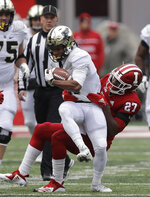 Now after extending Purdue's season by another month, the dynamic duo must wait to see if they'll get another chance to work with their innovative head coach.

Blough threw three touchdown passes, while Moore scored twice and tied a school-record with his seventh 100-yard game of the season, leading the Boilermakers past rival Indiana 28-21 for a second straight Old Oaken Bucket victory and a second straight bowl bid.

"I've been completely focused on this," Brohm said when again asked about the job opening at his alma mater, Louisville. "The last two weeks has been a little tough."

Speculation about Brohm's future has raged wildly since the Cardinals fired Bobby Petrino.

Brohm's resume appears to have everything Louisville could want.

In five seasons as a head coach, he has led every one of his teams to the postseason. This year, he helped Purdue (6-6, 5-4 Big Ten) upset three ranked opponents for the first time in 15 years and become bowl-eligible in back-to-back seasons for the first time since 2011-12.

And he did it behind Blough, a fifth-year senior at quarterback, and Moore, last year's Mr. Football Award winner in Kentucky at receiver.

"Rondale is a special player," Brohm said. "The more guys you get like that, the more special you can be. When we get a guy like that we're going to make sure he gets his touches."

Moore matched a season-best with 12 receptions for 141 yards and became the second player in school history with 100 receptions in a single season. He has 103, trailing only Chris Daniels (121) and he's tied with Steve Griffin and John Standeford for most 100-yard games in a season.

Blough was 27 of 35 with 310 yards and one interception and has matched his career-best with 25 TD passes this season. He also threw 25 in 2016 and both marks are tied with Drew Brees (1999) for fifth in Purdue history.

Indiana (5-7, 2-7) lost six of its final seven games, again falling one win short of the postseason.

Stevie Scott led the Hoosiers by rushing 20 times for 104 yards and one TD, giving him a school-record six 100-yard games by a true freshman. Peyton Ramsey was 36 of 51 with 345 yards and one interception but struggled to consistently put the Hoosiers in scoring position.

But the defense couldn't stop Moore or Blough when it mattered most.

Moore's 56-yard TD catch in the second quarter broke a 7-7 tie and he made it 21-7 late in the third quarter by turning Blough's perfectly thrown ball into a 33-yard TD reception.

But Purdue sealed the win with three big plays — Markell Jones' 32-yard run with 3:48 left, Navon Mosley's interception on the Hoosiers' ensuing possession and an onside kick recovery with 76 seconds left after Ramsey hooked up with Nick Westbrook on a 40-yard TD pass with 1:17 left.

Purdue: Brohm clearly has the upper hand in this series after snapping a school-record tying four-game slide with two straight wins.

Indiana: The Hoosiers spent all of the last offseason preaching the importance of finishing. Now they'll spend another long offseason searching for answers.

Purdue: Blough broke a tie with Kyle Orton for the fourth-most starts (36) by a Purdue quarterback since 1960, and moved past Mark Herrman and Jim Everett for No. 8 in single-season yards passing (3,521). ... Jones rushed 11 times for 95 yards, passing Harry Szulborski and Edwin Watson to move into sixth on Purdue's career rushing list (2,459).

Indiana: Ramsey finished second on the Hoosiers' single-season chart for completions (295) and attempts (447) and wound up sixth in yards (2,875). ... Westbrook caught eight passes for 125 yards and Donovan Hale had 10 catches for 81 yards. ... Mike Barwick Jr. picked off Blough in the final minute of the first half to extend the Hoosiers' streak of consecutive games with a turnover to 18.

Purdue: "I want Louisville to do what's best for them," Brohm said. "I'm a fan. But right now I'm the coach at Purdue and this is where I want to be and I like it here.

Indiana: "It's just a matter of finishing those drives and being able to keep our pocket clean, get the ball down the field," Allen said.

Purdue: Will find out its bowl fate on Dec. 2.

Indiana: Faces another longer-than-expected offseason to figure out how to get back to the postseason.