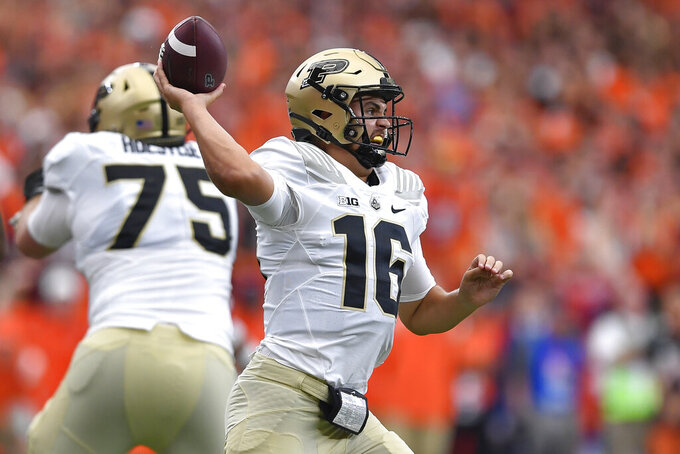 Line: Purdue by 19 1/2, according to FanDuel Sportsbook.

The Boilermakers are just 64 seconds — and five penalties — away from being 3-0. They have only themselves to blame. Last week's last-minute collapse prompted Purdue's coaches to rethink how they were teaching coverage techniques and it could make this game a perfect chance to rebound. Florida Atlantic is trying to snap a 26-game losing streak against Power Five foes. Its last win over such an opponent was a 42-39 victory over Minnesota in September 2007.

Purdue QB Aidan O'Connell and WR Charlie Jones vs. Florida Atlantic secondary. O'Connell and Jones have quickly become one of the Big Ten's dynamic duos. Jones has an FBS-leading 32 receptions (10.7 per game) through three weeks and is second nationally with 474 yards. O'Connell, meanwhile, continues ascending the Boilermakers' career passing charts. If Florida Atlantic's pass defense doesn't play better than its No. 113 ranking, it's going to be a lopsided game.

Purdue: TE Payne Durham. The fifth-year senior finally got in sync with O'Connell last week by catching nine passes for 83 yards and two scores, all season highs. But Durham's unsportsmanlike penalty with 51 seconds left led to a flurry of flags and eventually the loss. Everyone will be watching to see whether Durham can make amends.

Florida Atlantic: QB N'Kosi Perry. He led FAU to an impressive season-opening rout over Charlotte and tied the school's single-game record with five TD passes in Week 2 against Ohio. Now the Owls need the former Miami Hurricanes quarterback to provide another strong performance.

Owls coach Willie Taggart and Boilermakers coach Jeff Brohm were both head coaches at Western Kentucky. Brohm also served as Florida Atlantic's quarterbacks coach in 2009. ... The Owls scored 38 or more points in each of their first three games before being held to 14 last weekend. ... Purdue has been called for 25 penalties through three games, an average of 8.3, nearly double last year's average of 4.4. ... FAU RB Larry McCammon III has a team-high 394 yards rushing on a team that averages 5.4 yards per carry and 221.5 yards per game. ... O'Connell's five career 400-yard games is second in school history to Drew Brees (seven). ... The Owls have scored on their opening possession in three of four games this season.