Boilermakers at No. 2 Iowa featured game on Big Ten schedule 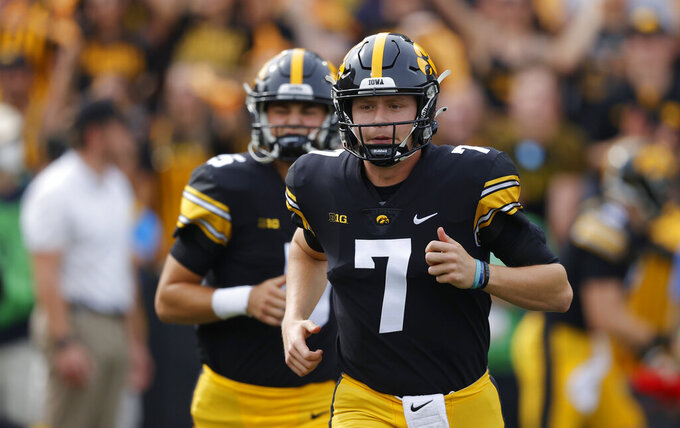 Purdue at No. 2 Iowa

The Hawkeyes (6-0, 3-0 Big Ten) have won 12 straight and are coming off a dramatic come-from-behind win over Penn State in what was a battle of top-five teams. Iowa's schedule gets considerably easier now, but this is no time to let up. The Boilermakers (3-2, 1-1) have won three of the last four meetings. Purdue is unsettled at quarterback, with Jack Plummer starting the first four games and Aidan O'Connell getting the nod in the fifth. Whoever starts will face an Iowa defense that leads the nation with 16 interceptions and 20 takeaways.

Army (4-1) offense vs. Wisconsin (2-3, 1-2) defense. It's always tough to prepare to defend the Black Knights' triple-option offense, which is generating 318 rushing yards per game and ranks second nationally. Wisconsin's defense should be up to the task. The Badgers are allowing a nation-low 41 yards per game on the ground and have given up just five runs of 10 yards or longer. A huge key is whether Army QB Christian Anderson is back from injury. Without him, the Knights were held to a season-low 3.5 yards per carry by Ball State.

Rutgers (3-3, 0-3) goes into its game at Northwestern (2-3, 0-2) looking for a fourth win in a season for the first time since 2017 and second time since it entered the Big Ten in 2014. The Scarlet Knights are 4-2 on the road since Greg Schiano returned for the 2020 season and will be making their first appearance at Ryan Field since 1989. They started 3-0 but have lost three in a row to ranked Big Ten opponents. They haven't finished above .500 in conference play since 2012, when they were in the Big East.

Indiana (2-3, 0-2) is a 4 1/2-point underdog at home against No. 10 Michigan State (6-0, 3-0), according to FanDuel Sportsbook. Nobody would have seen that being the case before the season. The follow-up to the Hoosiers' breakthrough 2020 season has been disappointing, and now QB Michael Penix Jr. is hurt again. Michigan State has been a revelation and is among three unbeaten teams in the Big Ten. Indiana's best chance to win is if it can slow down Spartans RB Kenneth Walker III, something only Nebraska has accomplished.

Nebraska (3-4, 1-3) fourth-year starting QB Adrian Martinez goes into a road game against Minnesota (3-2, 1-1) having the best season of his career. He has very little to show for it, though. Three of the Huskers' four losses are against top-10 opponents, and in two of those three Martinez had an ill-timed fumble that turned the game. Martinez has hurt the Gophers with his running the two times he's faced them, and he's highly motivated as the Huskers battle to reach bowl eligibility.